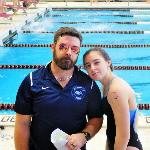 Swimming is my Life!  I Learned how to swim in Lake Champlain at Port Douglas Beach as a child and was first introduced to competition with a regional event the Swimkana.  In elementary school I joined a small club team called the Red, White and Blue Crew where I started competing in both swimming and 1 Meter Diving.  When I reached middle school I swam varsity for AuSable Valley Central School. I earned a sectional championship and qualified for states for four straight years.  I was able to earn multiple school records.  I swam division III for University at Albany until the school moved to division I and canceled the swim team.  I finish out my college by playing water polo at RPI.  My coaching career began at AuSable  Valley where I coached Boys Swimming before returning to school to earn My Masters in Chemistry Education.  Then I was Hired to coach Varsity Girls swimming at Plattsburgh High School.  We earned 11 section seven team titles over the 15 years I coached for Plattsburgh.  As my daughter showed interest in swimming she joined the Lake Champlain Waves team.  Over the time she has been swimming I have gained more and more interest in the Club until I became the Head Coach. My Coaching Philosophy is based on improvement.  If we can better ourselves through swimming I believe it will be reflected in all aspects of life.  Swimming is truly a lifetime sport and I mirror that in my own life as a triathlete.

Bio: My passion for swimming has been life long. I began swimming at age 5 and swam for the Estero Bay swim team in Morro Bay, California 42 years ago. At age 10, my family moved and I was unable to swim due to lack of access/affordability. I started to compete again in college and qualified for SUNYAC’s in both the 50/100 Free. I continue to compete in Masters Swimming, yet most of my swim competition occurs in the sport of triathlon.

I have taught both of my daughter’s how to swim, around age 1, although they might even say earlier. They both have had very successful swimming careers.  My oldest daughter, Alexis, is currently in Nursing school and intermittently competes during the LCS.  She also coaches alongside me. She loves swimming, sharing knowledge of the sport, and strives to help others achieve their goals.  While I have coached informally throughout their development, I was forced to maintain the balance, father/coach/spectator.  About 3.5 years ago, my youngest daughter; Brooke, frustrated by lack of forward progress, was even told she had “peaked” and asked me “Dad, have I hit my peak?”

This brings me to my philosophy: Swimming is a lifelong sport.  As for PEAK, one can always expect progress, by improving stroke mechanics, technique, and setting new goals. The “CLOCK” should be your primary motivation to measure your progress. Far too often, swimmers focus on other swimmers. Lesson: One cannot change how another swimmer will perform, as a swimmer, you only have control over your swim performance. Think positive, be confident, set realistic goals, measure and evaluate your progress. It’s a life long process.

Since assuming the head coach of the Waves two years ago, every swimmer has improved. Records have fallen, and our club has more energy and focus than ever.  I love teaching, I love coaching, I love helping others attain their goals and dreams. Smiles are contagious, and even though coaching is tough at times, it is so worth it. It is my belief; swimmers do not burn out, they become uninterested when they fail to progress.

I seek to inspire and motivate swimmers, so they are able to achieve their goals and remain healthy. Shoulder health is why I have a balanced IM approach as my coaching philosophy. While our club practices only 4 nights a week, we are quite competitive on the larger scale. Our swim workouts place an emphasis on technique, stroke, strength, and speed. Our relationship is one of respect and trust ~ the swimmers respect and trust that if they work hard in practice, they will get the results.