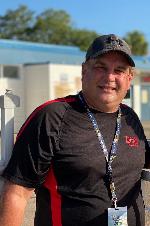 Coach Steve Hall has been coaching Developmental Swimmers (ages 5 to 13) for the Dolphin Swim Team (formally the Dolphin-Laser Swim Team) since the summer of 2009.  New and welcome challenges arrived when Coach Steve began developing the Age Group Preparation program in 2012 and in 2017 the Age Group / Senior program.  Working with the Dolphin Swim Team not only afforded Steve more quality time with his daughter Hannah, an age group / senior group swimmer herself, it also gives him a chance to give back to the sport that made him who he is today.

His philosophy for coaching is  “Developing well-rounded athletes not only helps these young athletes achieve their personal training goals but also gives them the building blocks to achieve anything they want, including being future leaders of society.”  He achieves this by taking the time to understand each swimmer’s goals for swimming and their future goals with education or anything they are interested in.  He believes in a family atmosphere which includes swimmers, parents and coach.  Coach Steve also knows that the sport of swimming is always changing and that education never stops, so he is always researching and striving to increase his knowledge for the sport so that he can use this knowledge to help his athletes grow.

Born and raised in North Little Rock, Arkansas, Coach Steve attended Northeast High School before going on to be awarded Henderson State University’s Men's Swimming scholarship. Steve started his career swimming for the Indian Hills StingRays Summer League, which led to swimming year-round for the North Little Rock Boys Club Marlins, then to Central Arkansas Swim Team Seals (CAST), finally ending up on the Dolphin Swim Team (LRRC). 1985 saw Steve become a swim coach for the West Optimist Club under the mentorship of legendary swim coach Paul Blair. In the summer of 1992, he took on the Head Coach Position for the Lakewood Wave Swim Team. Even more than continuing his close relationship with the sport, Steve really enjoyed passing on his swimming knowledge while working with kids of all ages and backgrounds.

Coach Steve has served on the ASI Board as technical chair in 2014 and was named 2019 Age Group Coach of the Year. 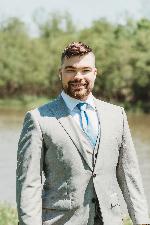 Coach Nolan Games has been coaching development, age group, and senior swimmers since June 2018. He has enjoyed the challenges he has faced; the goals his swimmers have not just met, but smashed; and the swimmer's growth and development. He views coaching as a way to give back what he was generously given as a swimmer himself. He received excellent coaching and mentorship under Patrick Bass and he strives to give his swimmers his best every single day, motivated by the gratitude and appreciation he has for how God can use a coach to have such a positive impact on a swimmer's life.
Coach Nolan began his coaching career in 2011 with the Lakewood Waves as an Assistant Coach. He was a captain and on the Sectionals team for the CASC Racers from 2010 to 2014. He swam collegiately and graduated with degrees in Biology and Computer Science. He became a Head Coach for the CASC Racers in Bryant in 2018. He joined the HAK Aquakids as an Assistant coach in 2019 to work alongside Coach Steve.
His coaching philosophy is "Train like you would want to live, with maximum effort, brilliance, toughness, and joy." He desires for every one of his swimmers to learn and grow, not just in the pool, but in life as well.
Coach Nolan is a certified USA Swimming Coach. 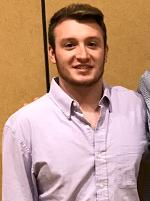 Braden swam for the Arkansas Dolphins where he was a multiple-time state and sectional meet qualifier. He also swam for Catholic High School where he was a four-time All District and three-time All State swimmer. Braden continued his swimming career at Henderson State University where he specialized in sprint freestyle, butterfly, and breaststroke. He has experience being a private swim instructor as well as a swim coach. Braden returned to coach the Arkansas Dolphins under Coach Steve during the 2019 summer. He was also the assistant Age Group and Senior Group coach for the Aquahawgs during their 2019-2020 season. He is now one of the assistant coaches for the Aquakids. 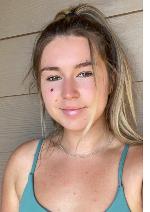 Jordan Godbee
I have been swimming since I was 9 years old. I started out on a summer league team and quickly fell in love with the sport and joined a club team. I swam on the dolphin lasers team for the majority of my swimming career, as well as for my high school. I graduated from Cabot high-school in 2018 and then went on to swim freshman year of college at Ouachita Baptist University.
I have coached for the Cabot piranhas summer league team for multiple years, and have been coaching for the aquakids since the fall of 2019.
I love that I am able to help kids succeed in a sport that has brought me so much joy into my life and has helped to shape me into who I am today.