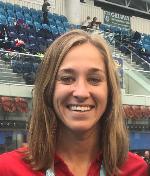 Emma Munsch has been with FORD since 2014.  During her time with FORD she has coached athletes to achieve qualifying times for State Championships, Sectionals, Junior and Senior Nationals, and Olympic Trials.  She has developed nationally ranked swimmers, Junior National finalists, and State Champions.  She has also helped numerous FORD athletes achieve their goals of furthuring their swim careers in college.  In 2018 she was selected to serve as the Assistant Women's Coach for the NCSA All-American team in Dublin, Ireland. She is thankful to be able to do what she loves and work with an awesome group of kids at FORD.

Emma is a Tucson native who has grown up in the Tucson swimming community.  She started to swim competitively during the summers with the Tucson City league, later moved on to SAAA, and made the big jump to year around swimming for FORD when she was 14.  She attended Salpointe Catholic High School, and swam for FORD Aquatics from 2004-2007.  During her High School Career, Emma was a multiple time State Champion, Sectional Champion, and JR National finalist specializing in sprint freestyle.  She was also a member of the 2007 NCSA Junior National All-Star Team.

After high school she attended and swam collegiately for the University of Arizona where she received a B.A in History, minor in Psychology, and a Masters Degree in Teaching and Teacher's Education.  During her career at the University of Arizona she was an NCAA qualifier all four years, two-time NCAA All-American, three-time PAC-10 Champion, two-time Olympic Trials qualifier (2008 & 2012), USA Swimming National Champion, Co-Captain, and a member of the 2008 Pac-10 and NCAA Championship team.  She is a member of the University of Arizona, Pima County, and Salpointe Catholic High School Sports Hall of Fame.  Along with coaching, Emma taught World History, AP and Honors U.S History, and Psychology at Salpointe Catholic High School from 2012-2016.

When not on the pool deck, Emma loves spending time with her husband Kevin (UA Swim Alum), daughter Katherine, and her two Rhodesian Ridgebacks. 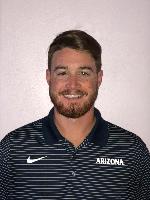 Matt Barber joined Ford Aquatics in August 2018 working alongside Coach Austin. Before moving to Tucson, Coach Matt grew up in Houston, Texas where he started swimming at a very young age. During his swim career in Texas, he was a multiple state champion specializing in freestyle and butterfly events. He also competed on a number of different junior national teams including the 2008 World Youth Team; 2009 Jr. Pan Pacific Team; 2009-2010 National Youth Team; and 2010 NCSA All-Star team in Dublin, Ireland.

During the day Coach Matt is the VP of Operations for a local toy design company, PlayAbility Toys. When he is not working or coaching, he enjoys the outdoors, watching NFL Football, and spending time with his wife, Sarah and dog, Stetson. Coach Matt is eager to pass down his knowledge of the sport to the hard working and passionate kids at Ford

Isaac Stump joined ford in November of 2021. Isaac grew up in Tucson and spent his entire age group career in Tucson. During his age group career, Isaac was a multiple-time state champion and state record holder specializing in freestyle and IM. He was also a multiple-time sectional champion, along with competing in numerous junior and senior national level meets while having Olympic trial qualifications in freestyle, backstroke, and IM. Isaac swam in high school at Iron wood-ridge high and collegiately at the University of Arizona from 2017-2021. Prior to joining Ford, Isaac coached high school at Ironwood ridge, before transitioning into a club coaching role.

Isaac is studying Neuro and Psychological Sciences at the University of Arizona with the goal of working in the medical field upon completion. In his free time, Isaac enjoys spending time with his friends, the outdoors, and with his wife Morgan and son Louis. 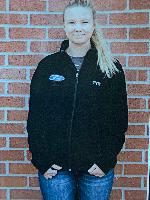 Paige has been coaching with ford since January of 2018 and has assisted with all groups at the Age Group level, ranging from the bronze and developmental groups to Silver, Gold and Elite. She is currently studying biochemistry, physiology, and math at the University of Arizona, and plans to pursue a career in the medical field after she graduates. 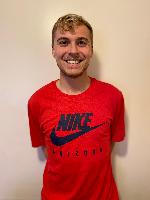 Domenic swam competitively since he was a novice swimmer in elementary school until he started swimming in high school and eventually for Mesa Aquatics. During his high school career, he made 3 state appearances and committed to Union College (KY) in 2017. Domenic then swam for Union for all four years in the college setting. He is now back home in Arizona with the same passion for the sport!

Jim has served as the Ford Masters coach since 1990. A native of Cincinnati, Ohio, he followed legendary Arizona coach, Frank Busch to Tucson when Frank first made his move to the desert. Since becoming the head masters coach, Jim has grown the program from 30 swimmers to more than 140.

Jim swam in college at the University of Cincinnati. He continues to swim, cycle, and run. Jim runs both the morning and noon workouts.