RIO Salado Swim Club is owned and operated by David Tait. David was an accomplished athlete in the sport of swimming. In his career he was a 3-time state champion and former state record holder, a Junior National Champion, a Senior National qualifier, and a competitor at the 2000 US Olympic Trials. David coached a number of high school athletes to the State, Junior National, and National levels and took one athlete to the 2008 Olympic Trials. He has over 2 decades of experience teaching children, teenagers, and adults how to swim. His real passion is helping kids learn how to swim and enjoy a sport that has brought him a lifetime of rewarding experiences. David's expertise has benefited children and adults of all ages and all levels of aquatic participation.

Together with David’s professionally trained staff, the RIO Salado Swim Club prides itself on developing the "total athlete."  They believe each swimmer has an opportunity to use the sport to learn the skills necessary for a successful life, while having fun and swimming fast at the same time.  Physical, mental, emotional, and social traits are all aspects of their philosophy that help to develop each athlete at every level in swimming to their greatest potential.  They strive to ensure that swimming maintains a bright and respectable future in the world of sports through the development of new training techniques in order to achieve greater and greater levels of human potential. 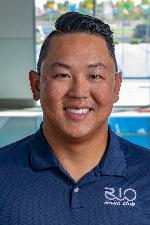 Bob Chen has been with Rio Salado Swim Club since 2010 and has been Head Coach since August 2015. During his tenure with RIO, Bob has coached every level of RIO swimmer in the program and guided them to success in all forms, from AZ Regionals to USA Swimming Select Camps to Olympic Trials. Since his arrival, RIO produced 2 Olympic Trials qualifiers, was named a USA Swimming Bronze Medal Club in 2021, produced athletes that committed to national powerhouse programs such as Michigan, ASU, and NC State, as well as win the Arizona Age Group State Championship for the first time in over 20 years.

Prior to being named Head Coach, Bob was a nationally ranked HS swimmer for Missiona San Jose Aquatics in Fremont, CA under Debbie Potts. He studied political science at San Jose State University before moving to Chandler, AZ and starting as a Head Site Coach for RIO's DT program at Hamilton HS. He helped grew RIO's DT program to over 500 swimmers, and worked with many athletes that went on to have very successful club careers at RIO. He was also the Basha High School Head Coach for 2 years 2014-2015. He is the current Chandler High School Head Coach and was recently named the 2020 AIA Division 1 Girls Coach of the Year. 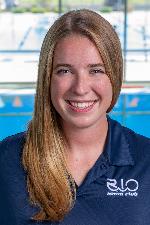 Kristin Adair has been with RIO since 2014. After beginning with the Development Team, Kristin moved onto the Competitive Team, where she has been since 2015. In that time, she has coached every level of swimmer in RIO's Age Group program and is responsible for leading the elite 13-14 age group. Kristin has developed numerous Arizona Age Group State finalists and champions as well as multiple Sectional and Futures qualifiers. She is also RIO's Social Media Director, responsible for program outreach and exposure through Twitter and Instagram. Kristin's coaching philosophy is when a program develops athletes who are high character leaders, competitive excellence will follow.

Kristin grew up here in the Valley and began swimming on a rec league when she was 5. She swam through her senior year of high school, where she also competed on her school’s soccer and waterpolo teams. She is currently completing her Bachelor's in Secondary Education. 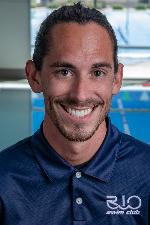 Justin Richardson brings over a decade of aquatics experience to the RIO family. From 2012-2017, he coached 10 & Unders at Desert Thunder Aquatics Club, where he achieved great success with his athletes, developing State Championsh up through AAAA swimmers. In just his first season at RIO, Justin has led athletes to unprecedented levels of success; developing State champions, team record breakers, and Sectional qualifiers. Justin believes that when a team prioritizes a positive culture paired with high level technical focus and a strong work ethic, athletes will break barriers through to new levels of achievement. Justin believes the psychological side of coaching is key to an athlete's success. If the athletes are in an environment of integrity, supporty, posititivity, and are challenged both physically and mentally, the goals they can accomplish are limitless.

Justin brings a high level of energy and a contagious passion for the sport to the pool deck. He embodies the best forward-thinking coaches by always looking to learn new ideas and expand their knowledge base. With his constant thirst for pursuing information in sports psychology, biomechanics, physics, and training methodologies, he is helping RIO create an environment where athletes thrive and become the best versions of themselves.

Justin graduated in February 2019 with a Bachelor of Psychology and will be pursuing his Master's Degree starting in the spring. In his very limited spare time, his biggest passion is traveling to as many countries as possible. He believes that it is vitally important for people to see the world and experience different cultures.

Glen Coy grew up swimming in Utah, then for Truman State University in Missouri. He joins RIO having coached competitive swimming in the Valley since 1992. Glen has extensive experience coaching all levels and ages. He has seen the athletes he has coached excel at both the state and national levels.

Glen has also been the girls varsity coach at Mesa Mountain View since 1999. His team has placed in the Top 5 at Arizona HS State Championships ten times during his tenure and he has produced multiple state champions, state record holders and All-Americans. Asa coach, Glen believes that working hard and having fun go hand in hand and he encourages the athletes he works with to always pursue both. In addition to coaching swimming, Glen is also a PE teacher for Mesa Public Schools and has been at Franklin Junior High since 2009.

Born and raised right here in the East Valley,  Patrick Tolson has been involved with swimming since birth.  He began swimming rec leagues for the City of Mesa at age 5.  He continued with his swimming career at Red Mountain High School in Mesa, where he was a middle distance and sprint freestyler.  In his 2 years with the Mountain Lions, he qualified and competed at the Arizona H.S. State Championships in the 100 and 200 freestyle.  After high school, Patrick attended Northern Arizona University. Whilst in college, he was a volunteer coach for the Flagstaff Snow Sharks.  During his breaks from college at NAU, Patrick coached rec league swimming for the City of Mesa during the summers.  He was the Assistant Coach, and eventually the Head Coach, of two teams during his 9 years with the City of Mesa.

Upon graduation from NAU in 2001 with a degree in Elementary Education, Patrick went on to teach 10 years of Elementary School in Gilbert, primarily First Grade. While still teaching, Patrick began coaching for Mesquite High School in Gilbert.  In his 14 seasons with the Wildcats, his Men’s Team has ranked in the Top 10 in the State of Arizona 6 times. He has overseen many eventual collegiate swimmers and his teams have achieved All-American Honors under his guidance and coaching.

Patrick joinded the RIO staff as the Head Coach of the Gilbert Jr. facility in 2011. Starting in April of 2014, Patrick assumed the role of Development Team Director from predecessor Bob Chen, who moved on to the Competitive Team. He continues to oversee all Development Team practices and is also the Head Coach of the RIO Masters Team. Patrick teaches lessons at EVO Swim School multiple times each week and runs private lessons for both children and adults.

Patrick and his wife Hilary have been married for 14 years. They have 3 children, with each swimming in the program at various levels. As much as Patrick enjoys his work in and around the pool, what he truly enjoys is spending time with his family.

Melissa Belote was born on October 16, 1956 in Washington D.C. and grew up in Springfield, Virginia. She has been called one of America's greatest swimmers. She first appeared on the national swimming scene at the age of 12 when she qualified for her first US Nationals. In 1972, Melissa won both the 100 and 200 meter Backstroke at Olympic Trials and set a world record in the 200 meter Backstroke.
Later that year at the Summer Games in Munich, Germany, Melissa led Team USA as she won three Gold Medals. She placed first in the 100 meter Backstroke, setting an Olympic and American record. She finished first in the 200 meter Backstroke setting a World, Olympic, and American record. She also swam the lead off leg on the World, Olympic, and American record setting 400 Medley Relay team. In 1973, Melissa continued her dominance when she won the 200 meter Backstroke at the World Championships. In 1976, Melissa made her second Olympic team, which competed in Montreal, Canada. Melissa finished fifth in the 200 meter Backstroke, setting a new American record.
From 1970 to 1979, Melissa won 8 AAU Individual National Championships and was a 16 time AAU All-American. She also won 6 individual National Collegiate Swimming Championships and led her college team, Arizona State University to two National Championships. Melissa was a four-year All-American at Arizona State University. In 1972 and 1973, Melissa was the runner-up for the Sullivan Award, the highest amateur award recognized in the United States. In 1977, she won the Broderick Award as the Outstanding Women's Collegiate Swimmer in America.
Melissa is in the Virginia Sports Hall of Fame, the Washington Hall of Stars, the Arizona State University Athletic Hall of Fame, and the International Swimming Hall of Fame. In 1999 Melissa was selected to the United States Swimming “Team of the Century,” as well as, Sports Illustrated top 50 athletes from the state of Virginia, and the Arizona Republic Newspapers top 100 Athletes of Arizona.
Melissa has been involved with swimming, either as a swimmer or coach, since 1965 when she started competing as an 8 year old at her community swim club, Springfield Swim & Racquet Club. In addition to her coaching responsibilities at RIO, Melissa is the Head Swim Coach at McClintock High School.
Melissa is married to Richard A. Ripley and they have two children, Rachel Alexandra (27) and Erik Alexander (25). Rachel graduated from the University of Missouri where she competed all 4 years and is now working in the fashion industry in New York. Erik recently graduated after swimming 4 years at Towson Univeristy in Maryland and is currently RIO's Senior 2 assistant coach.
Melissa Belote Ripley
38 year’s coaching age group swimming
4x All-American for Arizona State University
6x National Collegiate Champion for Arizona State University
2x Olympian (1972 & 1976)
3x Olympic Gold Medalist (World, Olympic and American Record holder)
World Champion 1973 – 200m Backstroke
Sullivan Award Runner-up (1972 & 1973) - Top Amature Athlete in American
Broderick Award for Outstanding Women's Collegiate Swimmer (1977)
Fiesta Bowl All-American (1977)
Arizona Republic Newspaper - Women Athlete of the Year (1977 & 1978)
Inducted into the Arizona State University Athletic Hall of Fame (1981)
Inducted into the International Swimming Hall of Fame (1983)
Inducted into the Virginia Sports Hall of Fame (1989)
Arizona Republic 100 Greatest Arizona Athletes
Sports Illustrated Top 50 Virginia Athletes
USA Swimming - Female 200 Backstroker of the Century
2008 Arizona Swimming Age Group Coach of the Year