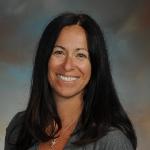 Coach Marisa has been around swimming since she was in a stroller (when her dad would tether it to the starting blocks when he’d swim with his masters swim group!)   Her competitive career started at San Jose Aquatics where she was a Far Western High Point winner and Junior National Champion.  She continued to excel through her high school career at Presentation High School earning four individual CCS Championship titles.  Her times landed her a scholarship to swim for the Boilermakers at Purdue University in West Lafayette, Indiana.  Her two school records, in the 1000 and 1650 freestyle, were finally broken in 2010. She graduated with her degree in Computer Graphics, tried to work in a cubicle, but soon found her way back to the pool deck.

After coaching at the Los Altos Golf and Country Club (1998-2000), San Jose Aquatics (2000-2004) and the Courtside Swim Club (2004-2008), Marisa founded Swim South Bay in the Fall of 2008.  She was the Head Coach at Presentation High School for 21 years and taught PE for 15 years as well.  In 2011, she was selected as the CCS Honor Swimming Coach of the Year.  She is the President of the Silicon Valley Swim League (SVSL.)   In 2016, Marisa was honored as the first swimming coach to receive the  Double-Goal Coach National award  by the Positive Coaching Alliance.  Her programs are led with passion, enthusiasm and a LOVE for the sport of swimming.

Marisa is a vegetarian Sagittarius who loves to knit, cook and binge watch shows.  She graduated from Ohio University ('11) with a Masters Degree in Recreation and Sport Science with an emphasis in Coaching Education and completed her double Masters degree in Public Health and Health Education from Purdue University in 2020. She is married to her college sweetie, Chris, former Purdue Track star and Bellarmine teacher. Together, they are raising two boys (Miles, age 16 and Donovan, age 13.)

Coach Spencer has spent quite some time in the Bay Area, as he is a Bellarmine graduate and current SJSU student.  Spencer has spent nearly his entire life at the pool and on swim teams.  He enjoyed coaching the Almaden Dolphins Cabana team for two years before becoming OakTree Cabana Club's Head Coach  (2012-14.)  Spencer’s talents do not solely lie within the pool however, he also has an extensive football background!  The swimmers are ready to learn with you Coach Spencer.

Born and raised an Army brat in Japan, he began his swimming at a very early age.  In fact, at 4 he would cry until Mom took him to the post pool where his swimming first took hold.  A swimming career is born.  At age 9, he began to swim with the local post youth team and starting competing in age group.  Swimming until he graduated from high school, he moved to the USA to begin college.

It appears the crying was the motivating factor in keeping up and eventually turning this into a athletic scholarship to the University of Southern California (USC).  There he achieved All-American honors, won NCAA events and ultimately competed at the Olympic Trials with the possible dream of becoming an Olympian in the 100 and 200 M Breaststroke.

Having the opportunity to compete at the highest levels of swimming has enriched his life and is passing on these experiences, knowledge and passion to our youth swimmers of today.

Claire has been working at the Presentation pool since 2007 lifeguarding, teaching swim lessons and coaching. She swam for Presentation all four years of high school, and then played water polo and swam for West Valley College. She graduated from San Jose State University with a degree in Business Management. Claire is also a paddleboard yoga and pilates instructor. She is enthusiastic about helping others to be healthy and fit, and bikes everywhere to stay in shape herself.

Coach Ramina was introduced to the world of swimming at a very early age, always loving the water and never wanting to get out of the pool. Once she began her freshman year at Presentation High School, it had been quite some time since she had stepped foot in the water.  However, she was eager to learn everything Coach Marisa and the rest of the swim team coaches had to offer. In the summer of 2008, Ramina began to share the knowledge that she had gathered from the years with her swimmers in the swim lesson program at The Pool at Presentation. Since then, Ramina's passion for swim lessons branched off into coaching in the race team program for Swim South Bay. Coach Ramina loves to share all of the knowledge that she has gained and wants to pass it on to all of her swimmers. She hopes that her swimmers learn to love the sport as much as she does!

Samantha loved swimming at a young age and did swim lessons for years, but never swam competitively until she reached middle school.  She has been a part of BAY since the Fall of 2011. She is a graduate of Presentation High School and is currently at San Jose State University pursuing a degree in English. Coach Sammy is excited to coach other swimmers and share her passion for the sport!