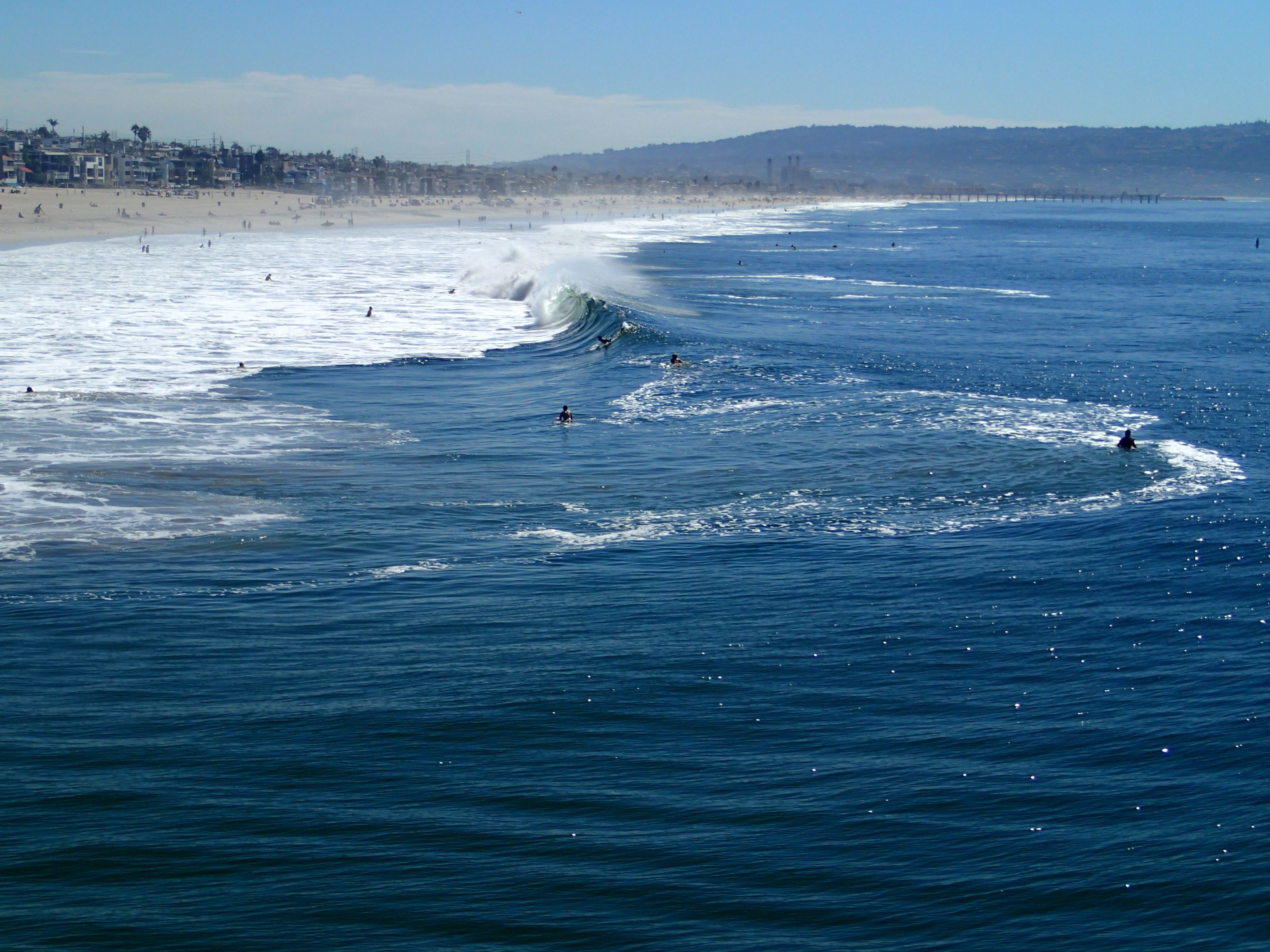 Scott Hubbard was born in Edina, MN. His first aquatic experience began at the age of 6 months, when his parents enrolled he and his sister in water baby classes. Scott showed proficiency as he grew, and by age 8 had ascended to the top of the swim lessons program. Scott transitioned into competitive swimming and immediately took to the sport with many early successes. In 1984, at age 12, Scott’s family moved to Sacramento, CA where Scott joined legendary Hall of Fame coach Sherm Chavoor of the Arden Hills Swim club. Sherm had coached numerous Olympians including Debbie Meyer, Mark Spitz, Mike Burton and, most recently, Jeff Float who was a member of the 1984 4 x 200 “Gross Buster” relay. Scott’s swimming career accelerated under Sherm and by his Junior year in high school he was among the top college prospects in mid-distance freestyle. As a 16 year-old Scott broke the Junior National record in the 200M free with a time of 1:51.64 and attended his first Olympic Trials for the 1988 team. A year later he broke another Junior National record in the 400M free with a time of 3:56.56. Scott then moved to California Capital Aquatics for his final year of high school and trained under Coach Mike Hastings where he placed 2nd at winter nationals in 500 free (4:22:83) and eventually accepted a scholarship to UCLA. Scott swam for the Bruins for 3 years, until the men’s team was cut for Title 9. Scott elected to retire from swimming rather than transfer from UCLA with one year of eligibility remaining. Upon retiring he became an assistant coach at Team Santa Monica, coaching distance freestyle to the Senior and Senior Development groups, as well as coaching masters for SCAQ, LMU and UCLA. Scott still enjoys swimming and will occasionally compete in open water events. He currently lives in Westchester with his wife Alex and his son Lucas. 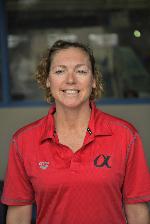 Coach Alex is originally from Phoenix, Arizona.  Her passion for swimming began at age nine when she joined her local club team, Desert Aquatics, to stay cool during the summertime. She continued to swim year-round for Desert Aquatics through high school, where she was an All-American and State Champion team member.  While a high school student, Alex began coaching the 8 & Under group for her club team.  She learned then that she found coaching and helping others very rewarding.

After high school graduation, Alex moved to Los Angeles in search of a milder climate, attending Loyola Marymount University.  She competed all four years at LMU under Bonnie Adair and Clay Evans, and was captain her last two years.  During college, she worked for a novice swim lesson program, Aqua Pro Aquatics, run by her college coaches. After graduating with a degree in English, she stayed in Los Angeles and began coaching for Team Santa Monica in 2005 (in addition to running the Aqua Pro program).  As head age group coach for Team Santa Monica from 2006-2010, Alex coached numerous nationally ranked 12 & Under swimmers (including a number one ranking). She also represented Southern California Swimming as the 11-12 girl’s coach at the North American Challenge Cup (NACC) meet for 3 years (06-09).

Coach Alex was recently at Westside Aquatics (10-16) as well as Palisades High (12-16), and as of 2017, she is very excited to be coaching for Alpha Aquatics. In addition, Alex coaches master’s swimming at UCLA and LMU. In her free time, she enjoys reading, hiking and playing with her Labradoodles. 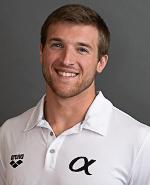 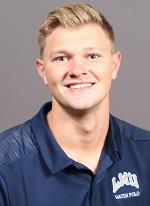 Matt began swimming competitively at the age of four. From the ages of four to eight he we would win several club events and developed an early love for the sport. A multi-sport athlete most his life, Matt rediscovered his passion for competitive swimming as a freshman in high school. A 4-year varsity swimmer for the Southridge Skyhawks in Oregon, he would compete primarily in the sprint and medium distance freestyle disciplines. Won a state title in 2014 as a member of the 200-yard freestyle relay. Finished as 2x State runner up in the 50- and 100-yard freestyle in both his junior and senior seasons. Holds the school record for the 200-yard freestyle. Was also a 2x state champion water polo player named team captain and league MVP in his senior year.
Matt's passion for water sports didnt stop there and went on to play water polo at Loyola Marymount University earning a spot on the WWPA all-academic team each season. He graduated from LMU in May of 2019 with a bachelor’s degree in Finance. Coach Matt comes to Alpha with nearly 5 years of coaching and private swim instructor experience at Playa Vista Swim Club. He works in the logistics industry and hobbies include backpacking, reading, painting and a love of board games. His most inspirational moment in swimming was watching Michael Phelps win 8 gold medals in the 2008 Olympic Games. 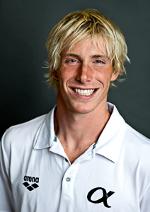 Alex Gray was born in Birmingham, Al. He started swimming at a young age at a local country club. He swam in the summers there until he was 10 years old and decided he wanted to try other sports. He got back into the sport and started swimming competitively at age 16, competing at a local YMCA. He went on to win the high school state swim meet in the 50 free senior year and earned a scholarship to swim for The University of Alabama. In college, he was surrounded by competitive and talented swimmers, and he improved quickly. During his 4 years, he enjoyed many individual successes, and become a staple on relays.  He won an SEC title in the 4x200 Freestyle Relay and earned first team All American status with a 4th place finish at NCAAs with the same relay. He graduated with BS in Business in Marketing. In 2017, he served as the head coach of Greystone Golf and Country Club, the same team he grew up. He recently moved to California where he is currently training for the 2020 Olympics and coaching the Alpha Junior and Senior groups.

Natalie Smith starting competitive swimming at age six. She’s been involved in some sort of swimming since the start, including swimming on Alpha towards the end of her time competitive swimming.  Coach Natalie is a CIF qualifier and was league champion in the 100 fly. She was awarded MVP for high school varsity swimming. She participated in seven years of junior guards where she competed in regional and national events, and was awarded national champion for the distance swim.

Natalie is passionate about teaching others the knowledge she has and hopefully creating the foundation for someone else’s love for the water. Natalie has been teaching swim lessons and lifeguarding at the YMCA for almost a year now and is very excited to come back to Alpha as a coach! 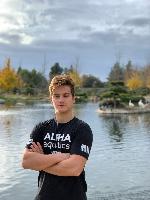 Alex Trubnikov was born in Petach Tikva, Israel and started swimming there when he was 6 years old.

At age 13, Alex moved from Israel to Marina Del Ray. Within a year, he finished in the top 4 at the summer Junior Olympics (100 Free). At Santa Monica High, he was a CIF state qualifier and he continued swimming at Santa Monica College (SMC), where he helped SMC win its first championship since 1990.  Alex concluded his competitive swimming career after swimming for 14 years.  Additionally, Alex also now has coached young swimmers for 4 years.

Alex enjoys working with kids as well as helping others. He spends most of his time researching and creating new ways to help people, which include authoring three books. Alex likes to stay active and enjoys traveling. He is very excited to continue acting as an assistant coach to Alpha Aquatics.

JP was one of the founding swimmers at Alpha when the team began in 2014.

He starting swimming at 6 years old.