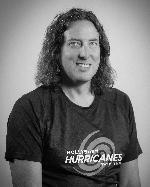 Brad has over 24 years coaching experience working with programs such as the St John's Legends, Camana Bay Aquatic Club, Canadian Dolphin Swim Club, Vancouver Pacific Swim Club and LA Swim Club. Brad's swimmers have broken hundreds of club records, dozens of Provincial records and his teams have won their respective Provincial championships. Past swimmers have raced on Canadian National Teams, Canadian Junior Teams and at various international competitions. His teams are known for having great camaraderie, building numbers and results at performance meets. During his time with the Hurricanes, Brad has increased numbers and team scores at provincial and national meets. He prides himself on his ability to building athletes who are hard working, resilient, goal oriented, good teammates and strong leaders. Brad is committed to the long range athlete development model that leads to each athlete getting as much as they can out of the sport of swimming.