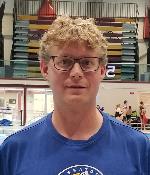 Has been coaching for 18 years, with 9 years of Head Coach experience before taking on the role with the Goldfins Swim Club.  A recent graduate of the Advanced Coach Diploma Program and a Chartered Professional Coach with Coaches of Canada, Steven has lead swimmers to club, provincial and national records and teams.  Highlighted with leading Goldfins swimmer Samantha Ryan to the 2016 Canadian Paralympic Team.  Steven leads the Club, swimmers and coaches with following mission, vision and coaching philosophy:

Vision: To be a teacher, a guide for young people, to be remembered as a catalyst to become more.

Philosophy. My philosophy is to develop the whole athlete, the swimmer and the individual through the challenges of sport.  To work together towards building a person who has grown into a strong successful adult who is able to handle all of life’s challenges.  I will do this by teaching athletes the importance of preparation, work ethic, growth, planning and living with purpose.  I encourage athletes to lead their own learning by giving them the tools and stepping back to guide them as they grow and develop.  At the end of the day they compete on their own and need to be self-reliant.

Gary left his home - Hong Kong to Qualicum Beach, BC when he was 16 for school. He graduated from Vancouver Island University with a Bachelor of Art degree of Physical Education. His coaching career began in 2008 when he volunteered as a junior swim coach at Ravensong Aquatic Club. In 2013, he was hired as the Head Coach for the Swift Current Barracudas Swim Club, where he successfully developed a number of provincial and ManSask qualifiers. Gary then moved to Saskatoon in 2018 and worked with Saskatoon Goldfins Swim Club. He received his Senior Coach (formerly Level 3) certification in April 2019. He is currently working toward his Advanced Coaching Diploma (ACD).
His coaching philosophy includes:
1. Provide the opportunity for all swimmers to pursue personal excellence through progressive training and competition.
2. Using measurable data to provide evidence of improvement.
3. Life and work balance.

Jennifer was fortunate to have the opportunity to begin her coaching career relatively early. Jennifer started coaching early on in High School and coached as an assistant in summer swim clubs in Central Alberta. Jennifer truly found a passion for coaching and filled her summers coaching as the Head Coach of the Camrose Sea Serpents, Royal Glenora Gators, and the Slave Lake Sharks prior to moving to Regina in 1996.

Most recently, Jennifer has gained experience coaching summer swimming and all season swimming with the Regina Piranhas Summer Swim Club, the RODS, the Regina Tritons, and has presently been coaching the Regina Masters Swim Club.  Jennifer has represented Swim Sask, coaching at the Western Canada Games, Saskatchewan Provincial Games, and Canada Games.  Jennifer shares her coaching passion through her facilitation and evaluation of the National Coaching Certification Program – Community Coach Course and the Fundamentals Coach Course.

Jen is currently coaching the B14 and W3 groups.

A Goldfin for life, Coach Sean has been with the team from the young age of 7.  After a successful swimming career cumulating in an appearance at the 2001 Canada Games Sean transitioned to coaching and hasn't looked back.  An integral member of the coaching staff Sean has coached every group in the club at one time or another and currently has expanded his role to coach B12 and B18.

Jeff is a long time Goldfin having swum for the team as an age group athlete before moving on to a successful varsity career with the University of Victoria.  A full time teacher Jeff is coaching W2 HBAC with great energy and passion, for many in the club their true love of swimming started in Coach Jeff's group.

Coach Mitch is a long time Goldfin, after having a successful age group career Mitch excelled as a member of the UBC ThunderBirds.  Mitch is working this season with the W2 group and brings a wealth of knowledge with him from his varsity experience. 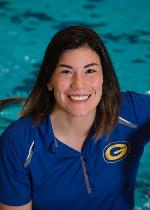 Kimberly is in her 3rd year coaching in the Goldfins competitive program, this year as our B12 coach.  A substitute teacher, Kim has a natural ability to bring a group together for fun structured learning environment.  Kim swam varsity for the University of Regina Cougars.

Colin was a competitive swimmer for over a decade in the sport, and added more years to that with his roles in the Junior Gold program, and last year coaching the Intro Group. Colin has now jumped into the deep end taking on the G16 group alongside Head Coach Steven Hitchings.

After beginning his swim career with the Goldfins in his early childhood, Reed swam competitively for most of his younger and adolescent years. After a short break, he returned to the sport as a coach for the Jr. Goldfins program and has continued to work with the club for the past 3 years. In this time, Reed has attained his Fundamentals Coach Certification and has had an important role in the athlete development of swimmers in both the Junior and Competitive programs. This swim season, Reed is looking forward to assuming a leadership role within the club as the Program Supervisor for the Jr. Goldfins.

Kylie is presently a swimmer in the Senior Performance Program with the Goldfins. She has been swimming competitively for six years. In that time she has represented Saskatchewan at the 2017 Summer Canada Games. Kylie looks forward to passing on her knowledge and passion of swimming to young swimmers in the Intro Group this season.

Charlize is an experienced coach of four years for a summer competitive swim club. She is presently the head coach of the Smoky River Manatees Summer Swim Club in Alberta. She was a Competitive swimmer for 15 years. Charlize is working towards becoming a Coach for the long run and wants to be the best coach she can. She was the assistant coach for the All Stars at the 2019 Summer Championships. Charlize looks forward to working with the White Group this season.