Carmen will enter her first season with WGB bringing her 22 years of experience as coach with her, including 12 years at her home country Mexico, where she was part of the 2008 Olympic team in Beijing, 2009 World Championships in Rome, 2007 Short curse world Championship in Manchester, 2007 Rio de Janeiro Panam Games team and many other international events.

In Canada, she spent the past 10 years working with the Hamilton Aquatic Club in Ontario, where she grew the team more than doube its size, and also developed many provincials, easterns, junior national, nationals and Olympic trials qualifiers.

We are looking forward to work with Carmen and the entire coaching staff to make 2019-2020 season a very productive and succesful one for all our members.

Director of Client Strategies at aasman brand communications in Whitehorse for the past 8 years.

I have been a technical coach on decks in Newfoundland swim clubs and now with Glacier Bears.

Shereen has been a part of the Whitehorse Glacier Bears on and off for 25 years. She started as a swimmer from 1977-87.  She started coaching right out of High School in 1988. She coached Mackenzie Downing when she was a cub at 6 years old.  She has always had a passion for swimming and coaching.  She said "It is a pleasure to be out there coaching swimmers of all ages".  She took a break for a few years while she went to school to become a teacher.  It was during this time that the club was transitioning from a summer club to a winter club.  She coached the Indigenous Games 2003 swim team.  We had 9 swimmers attend the event in Winnipeg, Manitoba.  Her goal as a coach is to ensure that all her swimmers try their best and have fun.  If they compete, it is always about setting personal goals for each swimmer and being a good team player.  She sees many parents that she used to swim with back in the day, that now have their own children in the club.

She started back with the winter club in March 2012 and has really enjoyed her time with the swimmers.  Shereen says, "see you in the pool or on the deck…" 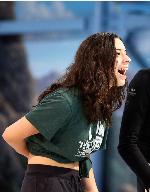 Born and raised here in Whitehorse, Bronwyn is a native Whitehorse Glacier Bear swimmer, swimming since she has been five years old. During her time as a Bear, Bronwyn was fortunate enough to earn a spot on team Yukon, team BC and both Junior and Senior Canadian Teams.

After graduating from high school, Bronwyn earned a scholarship to swim and study at NCAA Division I school, Indiana University. While there, she was varsity captain, Big Ten Champion and honourable All American. She completed her studies with a bachelor's of Science in Kinesiology, majoring in Exercise Science.
Bronwyn retired from swimming after the 2016 Rio Olympic Canadian Trials and moved back home to Whitehorse. Since then, she has found her way back to the pool, but this time as a coach.
Bronwyn has now been with the Whitehorse Glacier Bears for two full years, coaching from Brown Bears up to Silvertips.
Bronwyn is excited to be back with the Glacier Bears and is motivated to help young swimmers experience some of the great opportunities she had herself.

Kayla was born and raised in Whitehorse, but began swimming at the age of 6 when she lived in Yellowknife. Once back in Whitehorse at the age of 10, she began swimming with the Glacier Bears and spent many of her days at the pool, either swimming, coaching or lifeguarding.  In highschool, Kayla completed her NCCP coaching certification for swimming, as well as her lifeguarding certifications. Kayla went on to swim for the University of Calgary after graduation, before becoming a developmental coach with the Calgary Dinos swim team. Kayla coached for the Dino's for four years in Calgary, before returning home to Whitehorse where she worked as the Assistant Head Coach of the Glacier Bears under Head Coach Stephanie Dixon. Kayla is excited to be back on deck with the Glacier Bears after a few years away, and looks forward to seeing her swimmers develop into the best swimmers they can be.
When not on deck, Kayla works for the Yukon Government and loves outdoor rock climbing (and is also an ACMG certified rock climbing instructor), mountain biking, split-boarding, camping, general mountain adventuring and hanging out with Nomic, her adventure pup.

I was born and raised here in Whitehorse and was lucky enough to be a swimmer with the Glacier Bears for more than 10 years, mostly under Head Coach Marek Poplawski.  During that time, I competed up to the national level and was able to train under a number of really great coaches (picking up some tips and tricks along the way).  It was also during this period when I had my first exposure to being a coach, myself, as I was able to coach some of the younger kids within the club.
After graduating from high school, I attended Queen's University where I earned a Bachelor of Science with Honours in Kinesiology.  At Queen's I competed as a varsity swimmer for the duration of my 4 years and had the privilege of acting as the Men's Team Captain for my junior and senior years.  I was also able to continue gaining coaching experience during this time.  Following my time at Queen's, I moved to Saskatoon where I earned a Masters in Physiotherapy and gained a great deal of knowledge and experience, in regards to injury management and structuring conditioning programs for different populations, including youth athletes.
I've since returned to the Yukon and am now working as a teacher here in Whitehorse.  I'm happy to be back in the territory and thrilled to be able to work with athletes in a sport that means so much to me.