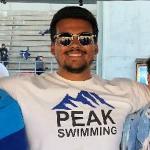 Coach Chris is entering his 9th year with Peak Swimming and his first year as Head Coach. During his time with Peak, Coach Chris has served as a coach for our Team Fit groups, Gold, Jr Elite, and now coaches our top training group - the Elite Group.
As a swimmer, Chris had a late start, beginning as a high school Freshman at the age of 13. Just three years later, he had improved from first learning the 4 strokes to becoming a CCS finalist and 3-time High School All American in his Senior year. This rapid growth was fueled by tenacity and an internal drive to learn and improve his technical base, traits he incorporates as part of his own coaching philosophies and hopes to instill within each athlete he works with. Chris was also a CCCAA State finalist in both individual and relay events competing for West Valley College.
As a coach, Chris has led his athletes to both JO's and Far Western event and High Point winners, and has also produced multiple Sectional, Futures, and Junior National qualifiers.
Chris has earned a BS in Kinesiology from San Jose State University, with an emphasis in exercise and fitness. Chris is also a member of the American Swimming Coaches Association (ASCA) and the National Strength and Conditioning Association (NSCA).

Coach Bryan started club swimming at 8 years old with Santa Clara Swim Club and continued swimming with the club and played water polo until he graduated high school. Bryan coached for Peak during his time at De Anza College and is currently studying Kinesiology at San Jose State.

Some things Bryan expects from his groups is to find something to enjoy about swimming, whether it is a specfic stroke/strokes or event/events, the process of competition, or the daily challenge of practice.  An important skill he wants his swimmers to learn is to listen, not just to hear, but to understand. He also looks for his swimmers to have a positive mindset and have fun doing whatever they set out to do.

Coach Bryan is passionate about coaching and seeing his swimmers progress and develop. He also enjoys traveling abroad and exploring new and fun areas.  Bryan also likes sports and exercise, like water polo, swimming and going to the gym.