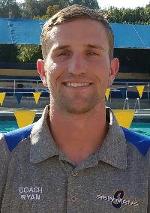 Ryan grew up in Merced and attended Merced High School. While at Merced, Ryan was voted Varsity MVP by his team 3 years, captured 7 individual Central California League titles out of 8 events, swam multiple top 5 times in school history as well as the Conferences history, and was a part of an undefeated league team from his sophomore year to senior year. After graduating from Merced High, Ryan swam a year for Merced College. His team won the Bay Valley Conference title and Ryan achieved 3 individual Bay Valley Conference titles, swam multiple top 5 times in school history, and gained All-America honors in the 1650-yard freestyle. After graduating from Merced College, Ryan accepted a full ride scholarship to a Division II University in Ohio where he completed his 17-year swim career and received a Bachelor’s Degree in History.

Ryan is a product of the Merced Skimmers Swim Team and has spent 16 years representing the Merced Skimmers either as a year-round swimmer in meets throughout California or as an assistant coach. Coach Ryan is excited about teaching and motivating the next generation of Skimmer swimmers.