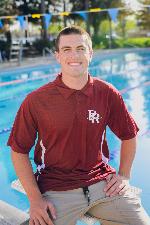 Coach Moore began his aquatic career swimming for Paso Robles High School. Collin was a member of the varsity team for three years with both the water polo and swimming teams.  Collin finished inside the top 15 at CIF Southern Section Division 2 Finals.  As a senior, Collin was a recipient of the Bearcat Male Scholar-Athlete of the Year award and was a captain of both the Men's Swimming and Water Polo teams.  In college, Coach Moore earned a full-ride athletic and academic scholarship to compete on the Men's Swimming and Diving team at New Jersey Institute of Technology (NJIT), a Division I university.  In 2014 and 2015 Collin was the Winter Eastern College Athletic Conference champion in the 200 Butterfly.  In his two years at NJIT he set school records in three individual events and three relay events.  Coach Moore then transferred to Fresno Pacific University (FPU), a Division II school, to compete for the Men's Swimming and Diving team on an athletic and academic scholarship.  Collin was top 5 all time in FPU's program history for both the 200 fly and 1000 free.  In the Pacific Coast Swim Conference, Collin had several top three finishes.  As a senior in Kinesiology at Fresno Pacific, Coach Moore earned the Academic Achievement Award: Highest Honors.  He also placed on the College Swimming and Diving Coaches Association of America (CSCAA) Scholar All-America team.  He graduated Magna Cum Laude in 2018 from Fresno Pacific University with a Bachelor of Arts in Kinesiology: emphasis in Physical Education Teaching.  Coach Moore has been the Flamson Middle School Boys' Water Polo Coach since 2018.   At Paso Robles High School, he was an assistant coach for the boy’s water polo team, before he was named the Paso Robles High School Director of Sport for the Boys' Water Polo program in 2019.  In 2019, he coached the team to an undefeated (8-0) season and a league title in the Ocean League.  Moore has also been an assistant coach for the Paso Robles High School swim team since 2019.  Additionally, Collin coaches for Paso Robles Aquatics as both a swim and water polo coach.

Coach Amanda’s love of coaching began with a passion for teaching.  She earned her B.A and M.A in Education from the University of California at Santa Cruz.  After earning her California Multiple Subject Teaching Credential at UCSC, she went on to earn her Early Childhood Education certificate at Cuesta.  In addition, Amanda has earned ASCA Level 2 Coach Recognition. Her  background in educating toddlers through middle school age children has given her valuable insight into age group swim coaching. Amanda has over 10 consecutive years of experience coaching lessons, summer league, and year round club swimmers. She has worked with children from the very beginning stages of lessons, and coached competitive age group swimmers to Junior Olympic, JAG, and Far Western times.  She believes that teaching children the lifelong skills of being comfortable and confident in the water, and loving swimming, are vital aspects of her job as a swim coach. A Central Coast native, Amanda grew up taking lessons and lap swimming at Cuesta College, and swam for Morro Bay High School. In her spare time, Amanda loves to run cross country, lap swim, and engage in water sports with her surfer husband and three children, who are all competitive swimmers.