Before arriving at Missouri State, Kyle served as the Head Senior Coach of the Little Rock Dolphin Swim Club which was a silver medal club excellence team under his leadership in 2013 and 14 team in Little Rock, Ark. and was the Head Coach and CEO of the Club 2o Sharks in Pensacola. Prior to his head duties, he worked as an assistant at Trinity Prep Aquatics in Orlando and Mecklenburg Aquatic Club in Charlotte, N.C.

Cormier received a bachelor’s degree in 2009 from the University of South Carolina in Hospitality Management and master’s degree from Missouri State University in sports management.

As an athletic scholarship recipient and team captain at USC Cormier was an individual NCAA qualifier in 2006, 2007 and 2009. He achieved NCAA All-American status in 2006 and 07, he was also a three-time Academic All-SEC award recipient. Kyle excelled at freestyle and individual medley events and was a school record holder at USC in the 100, 200 freestyle and 200 IM for at least a decade prior to completing his eligibility at Carolina respectively. He finished his career with the Gamecocks with seven top -16 finishes and two top - 8 finishes at the SEC championships. Cormier also competing at 2008 and 2012 US Olympic Trials, finishing his professional post-graduate swimming career in 2012 after posting 5 top 8 finishes at US National competitions from 2008 to 2012. 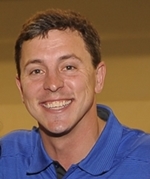 Coach Tyler Kerns joined the CMSA Coaching Staff in 2006 and serves as the club’s Head Age Group Coach. He has coached swimmers from novice to USA Swimming Senior National qualifiers.

Tyler graduated from the University of South Alabama receiving his degree in Business Administration with an emphasis in Management.  Tyler married Amanda (Berry) in October 2008. Amanda and Tyler have two children, Kennedy and Colton. Tyler enjoys all sports and has a special appreciation for the level of commitment and skill it takes to be a successful athlete. 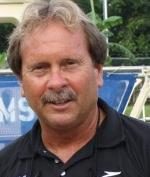 Brian Evans is the Head Site Coach for CMSA West and has over 39 years experience as a competitive swim coach. He formed the competitive program at the Providence Wellness Center location in 1997 after 14 years as an Age Group swim coach with CMSA and GMAA. As the West site head coach, Brian equally divides his coaching duties among both the Competitive Team and the Non-Competitive group members. Over the years, Brian has developed numerous City of Mobile, State of Alabama and Southeastern Champions as well as Nationally ranked swimmers.

Brian has earned a Bachelors and a Masters degree in Physical Education form the University of South Alabama and an Athletic Trainers degree from the United States Sports Academy.

He recently retired after 37 years as an Adapted and Regular Physical Education Specialist with the Mobile County Public School system.  He is also the current Owner, Aquatics Director and Head Swim Team Coach of West Mobile Swim Club. He is a member of Luke 4:18 Fellowship Church, has been married to his wife Debbie for 39 years and they have four daughters and six grandchildren. 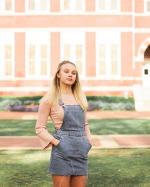 Growing up in Hunstville, AL, Megan has been involved in Southeastern Swimming for the past 10 years, as both an athlete and a coach. Megan comes to us from Auburn University, working as an age group coach with Auburn Aquatics for 2 years, an associate coach for Auburn Masters Swimming for 2 years, and as a student intern with Auburn Swimming and Diving for their 2017-2018 season.

Graduating with a Bachelors of Science in Kinesiology, Megan loves the science behind swimming. While at Auburn, Megan was involved with several organizations, such as Acing Autism and motor development research labs. Before her time at Auburn, she swam and coached for the Huntsville Swim Association.