Coaches and Board Members 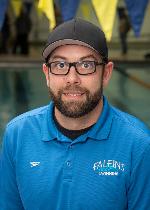 Tristan Cross has been a life long swimmer and then age group coach who was born Colorado. In 2004, Tristan was hired by the Falfins for his first coaching job. Coaching the Dynamos and the Blue group created a passion for coaching that turned a job into a lifelong career. After 3 1/2 years of coaching for Falfins, he was hired by CMA Swim Team to be their Head Age Group Coach. After 5 years with CMA and lots of success, Tristan joined the PEAK Swim Team. As the Head Age Group Coach at PEAK Swim Team, he helped grow the team from 10 swimmers to as high as 75 swimmers. After 3 1/2 fantastic years at PEAK, Tristan was rehired by Falfins. Through the past 14 years coaching in Colorado, Tristan has grown as a coach and learned from some of the best coaches in the sport. He is extremely excited to finally be back home at Falfins Swimming!
Currently, as the Director of Coaching with our team, Tristan’s goal is to help further the success of our athletes, our team and our LSC. Tristan is heavily involved in the elite level of Colorado Swimming. He has been selected to be a coach for Team Colorado eleven times, seven Mid-West All-Star Meets (2011, 2013, 2014, 2015, 2016, 2017 & 2018) and seven Western Zone Championship Meets (2011,2012, 2013, 2015, 2016, 2017 & 2018). In the fall of 2016, Tristan was elected as the Age Group Vice-Chair for Colorado Swimming. And in the fall of 2018, he was re-elected to another two year term as Colorado Swimming Age Group Vice-Chair. In addition to coaching with Falfins Swimming, he now also oversees all age group swimming for the state of Colorado and is the Head Coach of Team Colorado for the Midwest All Star meet, as well as the Western Zone Age Group Championships.  After working with the top coaches and swimmers in Colorado and the US, Tristan is ready to take Falfins Swimming to the next level! 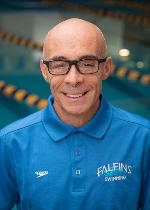 Jorge Fernandez was born and raised in Santiago, Chile.  Moved to the United States in March of 1974.

Jorge is an ASCA level 5 coach and has 33 years of coaching experience. He has been involved in athletics since the age of 10 mainly in cycling and swimming.

By the mid 80’s Jorge started coaching while attending the University of Colorado Boulder. He continued to coach in the 90’s and joined Greenwood Tiger Sharks in 1992 as the head coach. As Greenwood masters coach and head coach at GTS Jorge was awarded Colorado Sr. Coach of the year in 1996, 2000, and 2003.  During his time at GTS, Jorge coached Sectional Champions, Junior National Champions, Sr. National qualifiers, Olympic Trial Qualifiers, and one Olympic Triathlete at the 2000 Sydney Olympic Games as well as putting athletes on the Jr. National Team. Jorge has also been assistant coach at Jr. Team Camp in San Diego, CA., and Zone Select Camps at the Olympic Training Center, Colorado Springs, CO.

After being at GTS Jorge became head coach of the legendary Tacoma Swim Club where he had continued success. Due to his fathers health issues he decided to come back to Colorado and be at his side.

Jorge continued to coach and joined Falfin Swim Team in September 2015 as the Lead Sr. Coach where he has developed athletes from the state level to the national level.

Coach Jorge is a proud graduate of the University of Colorado Boulder with a (B.S. Kinesiology), and a (B.A. Spanish).

When not coaching you can find Jorge on two wheels as a category 2 competitive masters road cyclist. 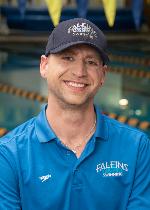 Jason Wederquist has been involved with Colorado Springs swimming for over 20 years as a swimmer, a coach, and a swim-parent. Jason swam competitively for 10 years on both year-round and summer-club programs and finished competing as a NCAA Division I swimmer. He started coaching as a local seasonal and high school swim coach where he worked with swimmers of varying abilities from developmental to state and regional competitors. After some time away from the water, Jason started working with the Falfins organization as a coach for the D2 and Sr. Prep (High School Performance) groups. Working now with the Blue group, Jason's primary focus is developing all swimmers to the best of their potential in a supportive and inclusive environment. 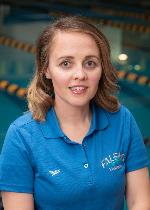 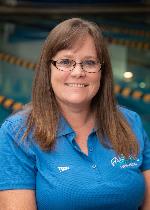