Coach Ramon joined the Rapids in 2018.  Coach Ramon is from Israel and was a competitive swimmer for 15 years.  She competed internationally on the Israeli National Team and was a National Champion and Record Holder.  Coach Ramon swam for Fresno Pacific University where she was an NAIA National Champion.  Her best event was the butterfly, but she also swam freestyle, breakstroke, and IM. 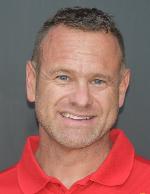 Coach Rob has worked with all the groups at Rocky Mountain Rapids over the past several years, but primarily focuses on the Senior Group.  Coach Rob began coaching a summer club in Fort Collins as a young teenager,  coached  USA Swimming clubs in Fort Collins, CO and American Fork, UT, and has been coaching college swimming for the past 23 years.  Coach Rob grew up swimming in Fort Collins and swam at the University of Wyoming, where he was an Academic All-American.  He was conference champion in both IM events, competed at the USA National Championships and the NCAA Championships.

"I love to see change.  The rate at which the young athletes are improving is sometimes mind-boggling!  Whereas my college swimmers train all year to see ever-smaller improvements, the younger RMR swimmers are literally dropping their times weekly!  It is fun to be  a part of the process and to help swimmers achieve their goals.  I love helping athletes understand what they need to do to grow and enjoy seeing them embrace change and be rewarded as they improve in the pool."