Coach Sydney brings 17 years of swimming experience to the Torpedoes: 16 years as a swimmer and 4 years as a coach. Previously, she was a volunteer Assistant Coach for the University of North Texas Swimming and Diving NCAA Division I team. During the 2018-2019 season the Mean Green recorded their highest finish at the Conference USA Championships in program history, broke seven school records, and sent a record number of athletes to the CSCAA National Invite. As an athlete at North Texas, Sydney qualified for the National Invite in 2018 and was a four year Conference USA Championship Qualifier. In 2018 and 2015 Sydney qualified for the "A" finals at C-USA Championships in the 100 Butterfly and "B" finals in the 100 Breaststroke. She was also team captain for the 2017-2018 season and received the Coaches Four Year Award for her constant dedication to the team.  In the classroom, Sydney received her Bachelor’s degree of Business Administration in Accounting and graduated with a 3.5 GPA.

Before competing at the NCAA Division 1 level, Sydney swam for the Colorado Torpedoes (formerly the Country Club of Colorado Stingrays) for 12 years and was the first Torpedo to compete at the D1 level. As a Torpedo, Sydney qualified for Junior Nationals in 2014 and qualified for Western Sectionals every year starting in 2011. Also in 2011, Sydney qualified to represent Team Colorado at Zone Championships in Clovis, CA and was a member of the 200 Medley Relay that took 1st place.  Sydney attended Cheyenne Mountain High School in Colorado Springs during the 2010-2014 high school seasons. In her first year as an Indian, Sydney qualified for the 4A State Championship Meet and placed 8th in the 100 Breaststroke. In her Junior season Sydney was State Champion, State Record holder, and All American as a part of the Indians’ 200 Medley Relay. As a Sophomore, Junior, and Senior Sydney was the 4A State Champion in the 100 Butterfly and held school records in the 200 Medley Relay, 100 Butterfly, 200 Freestyle Relay, and the 400 Freestyle Relay throughout her career as an Indian. Sydney was also a team captain for the 2013-2014 season. In 2014 Cheyenne Mountain Athletics awarded Sydney the Athlete Excellence Award for her performances as a three-time State Champion. 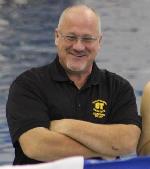