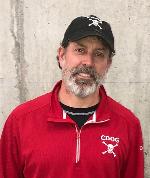 Sean joined the staff as Head Coach in September of 1999. During his tenure with the Sea Dogs, Sean has produced several senior national qualifiers, an Olympic Trials Qualifier, 17 Individual YMCA National Champions and 6 Relay YMCA National Champions.  His swimmers have broken 25 Individual Connecticut, 14 Connecticut Relay Records and have earned over 430 YMCA All-American Honors. Additionally, he was named the Connecticut Senior Coach of the Year in 2001 and was nominated for that honor in 2002, 2005 and 2008. Sean was voted the 2008 LC YMCA National Coach of the Meet by his peers and was nominated for the 2009 YMCA Coach of the Year.  A 1988 graduate of Cheshire High School, Sean returned to Cheshire after being the Head Coach of the Westfield (NJ) YMCA from 1998-1999. In addition Sean was the Head Coach of the Sun Devil Aquatics in Tempe, Arizona and the Assistant Coach with the Arizona State University from 1995-1998. During his tenure with ASU, the squad established a NCAA Division I top-10 team ranking all 3 years and his resume includes working with 10 Olympians, 15 Division I All-Americans and 5 Pac-10 Champions. Sean earned a BS degree in Biology at Southern Connecticut State University. While at Southern, he earned Division II All-American honors and was a multiple swim team record holder. After graduating, Sean was the assistant coach for Southern’s Men’s Swim Team from 1993-95. As well as being the Head Coach for Sea Dogs, he was also the Connecticut YMCA Swim League President from 2001-2003, Program Development Chair for Connecticut Swimming from 2004-2006 and is currently on the Connecticut Swimming Technical Planning Committee. 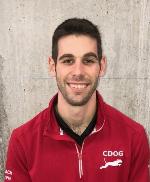 Cassie is joining the Cheshire Sea Dogs as the Head Developmental Coach and will primarily be working with the Buccaneer and Preteam groups.  She has been involved in swimming for over 25 years and during her swimming career, she was a 4x YMCA National Qualifier and was one of CDOG'S first Short Course YMCA National Champions in 2001 in the 200 yard backstroke and a member of the 400 yard medley relay.  Cassie was also a varsity member of the Cheshire High School Girls Swim team and was a 4x All-American Swimmer in the 200 and 500 Freestyle and a member of the 400 freestyle relay.  She went on to swim at The University of Connecticut and was awarded Most Valuable Swimmer, UCONN club award and was a Captain of the varsity team her senior year.  During that time she was a Senior National Qualifier, US Open Qualifier and Big East Finalist.  Cassie graduated the University of Connecticut with a bachelors degree in Kinesiology specializing in Coaching and Administration.  She then went to Central Connecticut State University and did some work on her masters degree in Physical Education and Human Performance while working as the Graduate Assistant with the swim team and the club team.  While there, she worked with Division 1 NCAA Qualifiers and multiple Senior and Junior National Qualifiers.  In 2008 she was appointed the head coach of the Farmington Valley YMCA in Granby and started the USA component to the team while developing the team into a top YMCA Yankee Cluster team with multiple CT Age Group Champions and CT Zone Team Qualifiers.  In 2013 she relocated to Cheshire and she was an age group assistant swim coach for CDOG from 2013-2017.  Cassie lives in Cheshire with her husband, Dave and their 3 kids; Christopher, Emmalyn and Alexander. 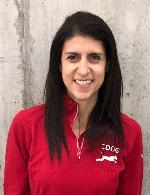 Rosanne has been with the Sea Dogs since 2014, and has been an age group swimming coach since 2005. Rosanne grew up in Hamden, CT and swam for Hamden High School. She attended Rider University in Lawrenceville, NJ  on a Division I scholarship for swimming. She set team records while at Rider University in the 500, 1000 and 1650yd freestyle events. She was named co-captain her senior year.  She graduated cum laude, earning her Bachelor of Science degree in Business Administration and went on to receive her MBA at Rider.   She spent many years in the marketing field. She currently resides in Cheshire, CT with her husband and 3 daughters. 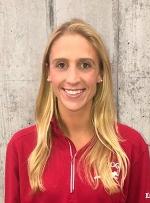 Karen joined the CDOG coaching staff in May of 2015 and has been a part of the Cheshire Y/Sea Dog Swim Club since 2000. During her time as an athlete for CDOG she was a four-time YMCA National Qualifier for the summer and spring YMCA nationals; a top 16 swimmer in Connecticut in 2008-2010; as well as having been the recipient of the Coaches Award, Most Improved, and Captains Award.

Karen grew up in Cheshire and was a four-year member of the Cheshire High School Girls swimming and diving team where she contributed to the national record holding team for most consecutive dual meet wins. She was also a state, state open, and SCC finalist all four years; Class LL runner-up her freshman and sophomore years; and Class L runner-up her senior year. She was a member of four SCC league championship teams and one Class LL State Championship Team her junior year. Individually she was Class L State Champion in the 200 free relay and the 500 free; and was the Class L record holder in the 400 free relay her senior year. She was also awarded team captain and was tabbed as the Most Valuable Swimmer her senior year.

After high school, Karen earned her BA degree in English while majoring in Elementary Education at Central Connecticut State University. Along with earning her degree, she swam four years of Division 1 at CCSU where she was a member of the North East Conference Championship Team in 2015. She primarily swam mid to long distance freestyle events such as the 200, 500, & 1650. In the classroom, Karen has been awarded the Scholar Athlete Award for High Academic Achievement, Dean's List, and President's List during her time at CCSU.

Karen is a certified Elementary Education Teacher and has recently completed her Master’s Degree in Special Education Literacy from the University of Saint Joseph, West Hartford. 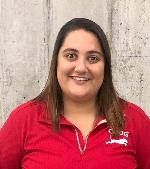 Jess joined the CDOG coaching staff in April of 2018. Previously, she was an age group / developmental coach at Amity Regional Aquatic Club. She was also Head Coach of the Watertown High School Boys Swimming and Diving team for the 2017-2018 season. Jess grew up in Watertown, CT and was a four-year member of the swimming and diving team at Watertown High School. She was a part of the team that went undefeated her senior year as well as winning an NVL title. After high school, Jess attended Southern Connecticut State University in New Haven, CT where she was a 3-year team member of the Swimming/Diving team. She was also a part of the winning Northeast-10 Conference team in 2017. While she was a member of the team, she swam primarily breaststroke and IM events. She recently graduated with her Bachelor of Arts in Biology from SCSU.