Coach Rob Bouchey has been a professional swimming coach for 18 years, earning ASCA Level 4 certification during this time. During the first 7 years he served in multiple roles with the Utica Shelby Swim Club, including as Head Coach from 2002-2007. Following USSC, Rob was the National Team coach and Director of Competitive Aquatics for the Regional YMCA of Western Connecticut from 2007-2012, and then returned home to Michigan where he served as the head coach of the Dearborn Dolphins for two seasons, before a short stint as a lead coach for the Birmingham-Bloomfield Atlantis.  Following relocation to Connecticut in December 2014, Rob joined the Nutmeg program in March 2015 as the Senior Coach, has been the Head Coach since September 2016, and purchased the team in July 2018.

Cecilia Emblidge comes to Nutmeg Aquatics with several years of experience both in the pool and on deck. Since 2007, Coach Cecilia has been the Head Coach of the New London Coastal Cruisers for the Special Olympics of Connecticut. Coach Cecilia currently serves as an East Lyme Aquatics & Fitness Center Swim Instructor for the Nutmeg Swim School where she has coached all levels from beginners to advanced stroke school. In addition to her work with the Special Olympics and Nutmeg Swim School, Coach Cecilia also serves an assistant coach for the East Lyme Middle School.

Coach Cecilia’s philisophy for swimming is one that focuses on the technical aspects of swimming, setting goals for the swimmers, and an unwavering commitment to making swimming interesting and fun for her athletes. She is an American Swim Coaches Association Level II Certified Coach.

Coach Cecilia was an age group swimmer for 13 years. She also swam in high school, college, and is a current masters swimmer with the Nutmeg Aquatics Masters Team. She was the All-County swimmer at for her high school in Westchester, NY. Coach Cecilia earned a Bachelors of Science degree in Nursing from Alfred University. 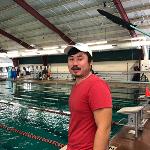 Andrew is entering his third year as a coach at Nutmeg Aquatics where his primary role is developing young athletes.  A 2010 East Lyme graduate, Chen was a member of the high school swim team for four years where he was a captain and member of the ECC Championship squad for three consecutive years.  He graduated from UCONN with a degree in Sports Psychology and also served as a volunteer coach and manager for the Division I UCONN swimming team.   Andrew is also the assistant coach for the East Lyme Middle School Swim team and has helped coach both the women’s and men’s high school programs under Jack Stabach.

Chen’s coaching philosophy is reflective of his own personal experiences with the sport of swimming.  “Swimming changed my life.  It helped to build me into the person I am today.  It is now my responsibility to give these athletes the same experiences I had and develop them into great individuals and swimmers.”  Andrew is a certified USA Swimming Coach and is also an American Swim Coaches Association level 1 coach.

Rachel joined Nutmeg as a coach in the fall of 2018. Previously she swam with Nutmeg through middle and high school. She continued her swimming career in college at the University of Saint Joseph, setting pool records in the 500, 1000, and 1650 freestyle. She has been teaching swimming for over 10 years to all age levels. Rachel began coaching in the fall of 2017 with Old Lyme High School. She primarily coaches Age Group 1 and is excited to work with all of the groups! When not coaching Rachel is a science teacher at East Lyme High School. Rachel is a certified USA and high school swim coach. 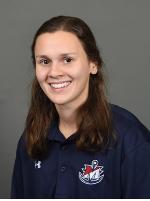 Emily graduated from SUNY Maritime College with a Mechanical Engineering degree. Currently, she works as an engineer at Electric Boat and serves in the Navy Reserve. Growing up, Emily swam on her local club,  and high school teams which lead her to swimming in college at SUNY Maritime. Along with competing at SUNY Maritime, Emily also coached the youth swim team sponsored at the college.

Emma is currently a student at UCONN and will be joining us as an assistant coach on all groups.  Emma has history as an age group swimmer with Nutmeg, and also swam with LEHY later in her career.  Emma is a graduate of NFA and swam her freshman year at SCSU.  We look forward to welcoming her (back) to the program.

Emily joined the Nutmeg Staff in February 2019.  A certified Physical Education teacher, Emily loves sports and athletic instruction.  We are excited to welcome her to the program.