Chuck Clark is entering his 21st year with the Rapids in 2019-2020 and has served as our Head Coach since 2009. Chuck brings over 25 years of coaching experience to the Rapids, which includes roles at the Stratford YMCA and Trumbull Pisces at the club level, along with Head Coaching positions with Weston and Bunnell High Schools. Chuck is a Level III certified coach with ASCA.

Chuck’s athletes have had continual success under his leadership, including multiple swimmers achieving USA Swimming “Top 16” rankings, over 30 swimmers named to CT Zone teams and he’s had over 20 swimmers move on to compete at the NCAA level.

Chuck is a Middle School Physical Education teacher at Harborside Middle School within the Milford Public School district. He lives in Trumbull with his wife Sharyn and three children – Lauren, Connor and Alyssa – all of whom swim on the Rapids. When not on the pool deck, Chuck enjoys powering down and spending with his family. 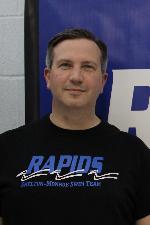 Bill Natlo is beginning his fifth season with the Rapids and was named our Head Age Group Coach in March, 2019 where he leads our Junior group and has oversight of our broader age group program.

Bill’s been coaching for 15+ years, the majority of which was spent in New York before moving to Connecticut in 2012. Bill’s past experience includes positions at the NCAA, club, high school and recreational levels, including: Head Coach at Pace University (2008-2011), Lead Age Group & Senior Coach with Empire and Middies Swimming (2004-2011), Head Coach at the Ursuline School (2007) and Head Coach at Rocky Ledge Swimming Association (2005-2010). Bill holds Level III certification from ASCA.

With Pace, 13 of Bill’s athletes were named to Conference All-Star and All-Academic Teams and six athletes achieved NCAA Division II qualifying times. At Empire and Middies, Bill helped develop numerous Metro LSC age group champions and LSC and team record holders, along with 50+ Sectional, Junior and Senior National qualifiers. Bill’s teams at Rocky Ledge captured back to back summer Division Championships in 2006 and 2007 and Bill was named "Conference Coach of the Year" in 2008. And at the Ursuline School, he guided the girls team to an undefeated season and the New York State Section I Title, sending six swimmers to that season's NYS Championship Meet.

Bill grew up in New York, swimming competitively for the BGNW Marlins and Pleasantville High School, where he was a 2-time Sectional Finalist in the 200 IM and 100 Breast. Bill competed at the NCAA level for SUNY Cortland, where he was a SUNYAC qualifier.

Bill works at IN Connected Marketing, where he leads the development and execution of retail marketing programs for Anheuser-Busch. He lives in Trumbull with his wife Tara and their three children – Hannah, Colin and Brendan – two of whom swim for Rapids. When not working or on the pool deck, Bill is probably doing something baseball related - he serves as Secretary on the Trumbull Little League Board of Directors and is an active Manager within the program, as well.

Coach John is entering his 17th year of coaching competitive swimming. Since 2017, Coach John has been the Head Coach & Director of the Park City Wolfpack. In the past 3 years the Wolfpack have seen increasing numbers at the CT Age Group Championships, CT Senior Championships, TYR International Invitational, EZ Age Group All Star Qualifiers & EZ Sectional qualifiers. Throughout Coach John’s years of coaching, he has coached all levels from novice to national level swimmers. Coach John’s swimmers throughout the years have been Age Group Champions, CT Senior Open Champions, CT Resident and CT Record holders both individually and on relays. Coach John was CT Board of Director member in 2010-2012 as Coaches Representative. He was a member of the CT Senior Committee from 2016-2020. In 2020, John was the Meet Director of the CT LC Senior Open in March.

John, brings 10+ years of NCAA division 1 college coaching experience as he is the Head Swimming & Diving Coach at Sacred Heart University. In his time at SHU, Pioneer members set 67 school records and have set 25 plus pool records throughout the region. SHU Swimmers & Divers continue to excel in the classroom as Scholar Athletes.

Coach John resides in Wallingford CT, with his wife Amber and Daughter Chloe. John enjoys watching his daughter dance competitively and the little free time he has left he enjoys playing softball and golfing.

2019-2020 is Etnike Dovolani’s second year with Rapids, where she’s the Lead Coach for our Novice Group. In addition to Rapids, Entike spent four years with the BSY Torpedoes and three years volunteering with St. Pete’s Aquatics. At BSY, Etnike was responsible for helping develop a YMCA Qualifying athlete. She holds Level 1 Certification from ASCA

Etnike spent time in Stratford before moving to Florida when she was little, where she swam for 12 years for St. Petersburg Aquatics. She’s currently attending Southern Connecticut State University as part of the their biology and pre-med program.

Etnike lives in Stratford and when not in class or at practice, she volunteers at local hospitals and spends six days a week training CrossFit.

Emily DeMace is entering her fourth year with the Rapids in 2019-2020 where she’ll be assisting Chuck with our Senior program.  For the last three years, Emily served as our Lead Sophomore Group. In addition to Rapids, Emily spent 2016-2017 as an Assistant Coach with the Masuk Boys Team and was named to the Eastern Zone Short Course staff in 2017.

Many of Emily’s athletes have achieved competitive success under her guidance with over 20 swimmers qualifying for Age Group Championships, Senior Championships and Zone Teams throughout the years.

Emily grew up in Monroe where she swam for the Monroe Gators, SMST Rapids, Valley YMCA Sprinters and Masuk High School. Emily went on to compete at the NCAA level for Adelphi University, where she graduated in 2016 with a BS Degree in Business Administration.

Emily currently lives in New Haven, where, in addition to coaching, she works as a Program Coordinator for Talem Health, a continuing medical education company located in Trumbull.  She’s the oldest of three in her family and her siblings were Masuk High swimmers. When not on the pool deck, Emily’s probably out training for, or competing in, a 5K, 10K, Half Marathon or Sprint Triathlon.

Allie Szabo is entering her 12th year with the Rapids in 2019-2020. She’s spent her entire coaching career here with SMST, working primarily with our Developmental group and youngest swimmers during that time.

Allie has been instrumental in the development of our young swimmers over the years, helping to set a strong foundation that’s allowed them to move on and succeed at higher levels of the sport.

Allie grew up in Shelton and swam for the Shelton Seals and the SMST Rapids at the club level, as well as 4-years on the Shelton High Girls Team. She attended the University of Connecticut, where she spent three years competing on the university’s club swim team.

Allie is a Speech Language Pathologist within the Fairfield Public Schools at Fairfield Ludlowe High School. She lives in Shelton and when not on the pool deck or working with students in Fairfield, you’ll find her hanging with her rescue pup, Bella.

Kyle Barber enters his second season with the Rapids in 2019-20, where he’ll again be assisting across all of our age group teams. Kyle also previously coached with us back when he was in High School for two years.

Kyle grew up in Shelton where he swam on the Rapids for 11 years and competed four years on the Shelton High School team. Kyle then attended Mount Saint Mary College where he was named team captain and held the school record in the 200 fly and the Skyline Conference record in the 1000 free.

Kyle works as a contractor with Teksystems for Yale New Haven Health Services in their fleet services IT department.  He lives in Shelton and enjoys reading, playing videogames and hanging with friends when he’s not working or on deck with the Rapids.

2019-20 is Victoria San Pietro's first year with Rapids where she'll be assisting our Novice and Junior Groups.  Vic brings four years of swim coaching experience to our team, including three years at BSY and another with the Wallingford YMCA.  With BSY, Vic helped a number of swimmmers qualify for both short course and long course Age Group Championships.  In addition to swimming, Vic has also spent four years coaching lacrosse at Joel Barlow High School.

Vic was born and raised in Stratford and competed for BSY and Bunnell High School.  She went onto swim at Eastern Connecticut State University for four years and was also a dual-sport athlete during that time, having played on ECSU's Lacrosse team for three years!

Vic lives in Milford currently and works at BSY as a front desk associate and helps teach private swim lessons.  Additionally, Vic is finishing all her necessary prequesites for nursing school!

When not on the pool deck, you'll probably find Vic at the beach, eating Colony Pizza or spending hours wandering around Target!