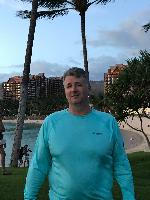 Hello, my name is Jonathan Zuchowski, and I am the head coach of Flood Aquatics Swim Team.  I am a USA Swimming Certified Coach and ASCA Level 5 lifetime member.

Since changing careers and moving to Florida, I rediscovered my passion for swimming.  Several years ago when my children began competing, I realized that I wanted to get back into the sport I love.  I spent a considerable amount of time learning from 3-time Olympian Gary Hall, Sr. at the Race Club.

While I am excited by all the swimming accomplishments and awards, I am most proud of the environment that my coaches and families have created.  We are a small but mighty team and serve a powerful God.

Gina attended Florida Atlantic University where she studied Interdisciplinary Studies with a certificate in Women and Gender Studies. She also has her Associate of Science in Sign Language Interpreting for the Deaf from Daytona Beach Community College.

Gina is the Head Varsity Coach for The King's Academy Women's Swim Team.  She oversees our developmental Bronze 1 & Bronze 2 groups.  In the past year she had numerous swimmers make Junior Olympics and place in the top ten.  Coach Gina represented the Florida Gold Coast at the 2018 Open Water Zone Championships.