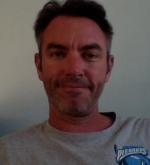 Coach Woods has been an active member of the Florida Gold Coast since 1995 as both a swimmer and coach. Coach Woods is a current member of the American Swimming Coaches Association, and is Level 4 educated. Having been a coach at PST since 2006, Coach Woods has coached swimmers at Central Park from 5 years old to masters.

Coach Woods led Plantation High School Water Polo to a district title in 2007, was selected to the FGC All Star and Zone Staff in 2008 and was chosen for the 2009 BCAA All Star Water Polo Coaching Staff.

As an athlete Coach Woods was a Sectional Finalist, 8 Time District Swimming Champion and 6 Time State Finalist. He was also selected two times to the Collegiate Water Polo Association All Conference Team, while at Florida State. 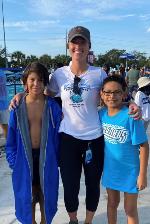 Coach Hannah was born and raised in Kansas and grew up swimming with Topeka Swim Association. When Hannah graduated from high school she was a High School All American, Sectional Finalist and Junior National Qualifier. Coach Hannah atteneded Missouri State University on a athletic scholarship and was a four year conference team member and team captain her senior year. Hannah recieved her Bachelors in Psychology with an emphasis in Child and Family Development.

When she graduated from MSU she took a job with the Kansas City Blazers as their Lead Senior I and II coach and then was the Age Group Coordinator for Empire KC before moving to Florida. She has worked with Sectional Finalists, Futures, Junior National, and World Champ Tirals qualifiers as well as Top 20 Nationally ranked swimmers.

Hannah currently works with the Junior Piranhas and Age Group I groups.

In her spare time Hannah enjoys swimming with the Masters Team, competing in Open Water swimming races. She has completed the Swim Around Key West race twice finishing third her first year and second the next year. Hannah enjoys going to the beach and doing outdoor activities with her Husband, Bobby and their dog, Rocco.

Hannah's favorite thing about coaching is seeing kids fall in love with the sport that has taught her so much. "Those lightbulb moments are what I live for. To see an athelete put in the work and finally understand the concept or skill is so powerful!"

As a competitive swimmer, Dolores set County and District High School records in both Freestyle and Backstroke and finished 3rd in the 100 yard freestyle in her Florida High School State Championships. She went on to compete for 8 years as a Masters swimmer. Her goal is to pass on the positive influence swimming has had on her life, and make workouts challenging but fun.

Coach Dolores has also worked with numerous Zone and All Star coaching staffs during her years coaching in the Florida Gold Coast. 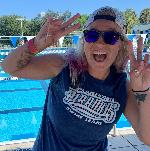 Coach Erica grew up competing on the Hilton Head Aquatics swim team, breaking individual records and was a record breaking member of several relay teams, some of which still stand. She achieved NCSA Junior National Qualifying Times and was a member of the SC Zone Team two years in a row. She later moved to North Carolina and attended Campbell University as a member of the swim team, where she helped break relay records her freshman and sophomore year and achieved best times in all of her races during her four years.
Coach Erica has taught swim lessons to various ages. helped coach OverHills High School swim team in NC to best times and achieving state qualifying times, and has stayed active in the pool. She has a Bachelor's degree in Educational Studies, a Master's degree in Christian Ministry, and is working towards a PhD in Couple and Family Therapy. In her free time, Coach Erica likes to spend time with her dog Ruby, at the beach, playing video games, and telling bad jokes.