Head coach Kirk Peppas founded Metro Aquatic Club of Miami in 1983. Since his first year with the program where he had a Senior National Qualifier – to now where we have multiple top 16 ranked swimmers and World Championship Athletes– he has made it his mission to make sure MAC stays a dominant force in South Florida.

This past season at MAC he saw several of his swimmers have break out years. Carlos Omana swam a top 30 time in the world in the 400IM LCM and Chinyere Pigot became ranked top 100 in the world in the 50 LCM freestyle.   Victor Lopez Cantera and Ana Anaya will be competing at the 2011 Senior Nationals and Julian Ballestas and Carlos Omana will  compete at summer Junior nationals. All of these athletes are all presently ranked top 10% in the nation for their age in their specific events. He saw 75% of his graduating seniors go to Division one colleges and earn over 300,000 dollars in college scholarship.

Before MAC, Peppas worked for the University of Miami’s club program where he was in charge of many junior national qualifiers, and also coached the age group program which had multiple team Junior National Championships.

As an athlete Peppas swam in the 1976 and 1980 Olympic Trials and was world ranked in 1979 and 1980 in the 100 Meter Freestyle. He swam for the University of Miami and Graduated with a degree in accounting.

Coach Kirk lives in south Miami with his wife Julieta Rodriguez and dogs Bear and Bayley. He has lived in South Florida his entire life surrounded by his family and friends who admire, cherish and respect him.

Coach Kirk Peppas can be reached at [email protected]

As coach Ana enters her 11th season with MAC she has truly highlighted our age group program with her high accomplishments in the 2010-2011 year.  As the coach of the 8 and under age group, which is normally just suited for beginner swimmers, her swimmers had a break out year scoring in the 9-10 age group JO's.  Taking children from just learning to swim and teaching the four competitive strokes is a difficult task, but she also helped her athletes not only qualify for the JO championship meet, but to score as well and help the team to a great year of success.

With the help of our learn to swim program coach Ana's group will take a big step forward.  The group is sure to improve further due to the fact that all 8 and unders at Tami-Ami will know the competitive strokes and will be at a similar training level. 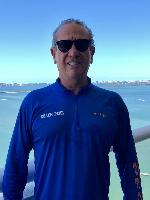 -Multiple athletes have obtained university scholarships due to their sporting achievements