Adam Madarassy, a former Olympic swimmer, is the owner and head coach of Eagle Aquatics.

Madarassy attended the University of Louisville from 2004 - 2009 where he was a member of the Louisville Cardinals Swimming and Diving team. In his freshman year he received the Swimmer of the Conference Award and Freshman of the Year Award at NCAA for the 200 butterfly. He had multiple Conference USA and Big East records and was the captain of the team in his senior year.

Madarassy graduated from University of Louisville in 2009 majoring in Business Management. He then began coaching for Cardinal Aquatics for over two years where he found his true passion for coaching. He mainly worked with age group swimmers but also helped out with the younger and older kids. Many of the kids qualified to compete at States and Nationals. He was also running the Masters program. 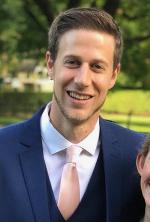 I graduated from Purdue University in 2012 with a degree in Exercise Science. Upon graduation, I was hired as the Head Strength and Conditioning Coach of a club swim team in Illinois. I spent three years there running the dryland program, as well as working as an assistant coach. After that, I got married to my beautiful wife, Julia, and we moved to Philadelphia, where I was hired as the Personal Training Manager of a multi-billion dollar fitness company. I gained valuable experience there working in many different capacities, while continuing to specialize as a swim-specific personal trainer working one-on-one with athletes at the collegiate and high school level. I realized my greatest passion was coaching and mentoring youth athletes, and that I needed to find a way to make that my full time job, so I started my own business called "SwimStrong Dryland". I have been running this business for almost 2 years now, and I haven't looked back.

In total, I have spent the last 8 years building swim-specific dryland programming for athletes of all ages. In that time, I spent 5 years as an assistant swim coach as well. I absolutely love being on the pool deck each day, and it is such a joy to see kids achieve goals they never even knew were possible. I believe there is so much untapped potential in each and every athlete, and it is my passion to help bring that out by inspiring, motivating and coaching them with maximum effort and care. I believe that with hard work and consistency, great things can be achieved.
I am beyond excited to be coaching with Eagle Aquatics! To be able to learn from Coach Adam is such a blessing, and I am looking forward to constantly improving my swim coaching skills. I plan to continue to grow as a dryland coach as well, as I have coached many kids to the Olympic Trials, NCAA National Championships, Junior/Senior Nationals, and YMCA Nationals. I look forward to taking things to a new level alongside Coach Adam, and I'm so grateful to be a part of this organization!