Coach Eric brings a wealth of experience and technical expertise to South Florida.  Before stepping on the pool deck at MCDS, Eric spent seven years as the Head Swimming & Diving Coach and the Aquatic Director at Drew University.   While at Drew, Eric was the driving behind a total program overhaul.  Drew Swimming once a dominate regional program had slipped into obsurity. He was able to refocus the program, recruit on a national level and bring succuss back to the pool deck.  During his time at Drew, Eric became the 3rd winningest coach in school history, his swimmers set 21 new school records and he had 24 ECAC qualifiers. Through fundraising and a vision for the future of the program, Eric installed a 1 and 3 meter diving board and started the school’s first ever diving program.  His first diver, Jenny Stein finished 2nd and 3rd in the conference as a freshman.  Before taking the reins in Madison, New Jersey, Coach Eric spent seven seasons in New York City, with the Columbia University Men’s Swimming & Diving program.  As the assistant coach for the Lions, Eric helped guide the team to four of the program’s most successful seasons.  He was a large part of the team’s steady climb from sixth at the Eastern Intercollegiate Swimming Conference in 2001 to third in 2004, 2005 and 2006.  He played a pivotal role in helping coach 2 Ivy Champions (1000 Free & 400 IM), an NCAA qualifier in the 400 IM, 3 Olympic trial qualifiers and over 13 new school record holders.

No matter what pool deck Coach Eric is roaming, he consistently talks about creating the right environment and culture for his swimmers.  Coach Eric is excited to bring a professional level of coaching to the pool deck here at Miami Country Day.  "I'm really proud of the athletes that I've been able to work with.  They have really taken to the new training program well.  They have been open to new ideas and I can't say enough about their work ethic, I've been really impressed.  I am very excited about the future of this program.  We have athletes here that are not satisfied and that makes for a fun work environment!"

A 1996 graduate of the University of Florida, Coach Scheingoltz served on the Gators’ coaching staff as a volunteer assistant from 1994-1996. His professional coaching career started in 1996, when he coached for the West Point Swim Club, a U.S.S. club team in Highland Falls, N.Y. From 1999 to 2001 Scheingoltz ran the senior group of an inner city team called the Big Apple Marlins, located in Manhattan. Also during that time Eric ran a “learn to swim-team” program for youngsters at a local sports club. Many of the athletes that Eric has worked with, at the USS age group level, have gone on to successful college swimming careers.

A native of New York’s Rockland County, he was a member of the Spring Valley High School team.  During his high school career he was a 2 time captain (Junior and Senior year) as well as a recipiant of the Coach's Award.  While swimming for the interscholastic team he doubled as a member of the the West Point Swim Club, a USA Swimming club located in Highland Falls, NY.  While he was a member of WPSC, Coach Eric was part of many very successful relays.  In 1988, Coach Scheingoltz was a member of a 15-18 200 Freestyle Relay team that swam the 10th fastest time in the country and as a senior a 15-18 200 Medley Relay qualified for Junior Nationals . With a promising future in the sport, Scheingoltz was slowed by shoulder injuries that ultimately needed surgical treatment. But Eric fought back and was a state qualifier as the breaststroke leg on the 200 Medley Relay. He was also elected as an All-County swimmer as a senior, just one year removed from shoulder surgery.

Coach Eric earned his B.A. in liberal arts and sciences from the University of Florida in 1996, and received his master’s in bio-behavioral sciences, physical education from Columbia University’s Teachers College in 2005.   Eric now lives here in Miami Shores with his wife Julie and his two children, Lilly (14) and Mateo (12). 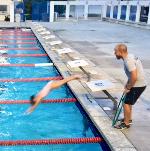 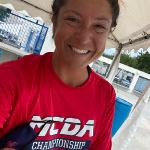