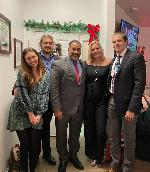 After a successful summer season with the Nocatee Blue Tide Shannon was asked to help start a year round swim program in Nocatee.  Prior to Nocatee she was the Head Age Group Coach for Mandarin Aquatic Club and an Assistant Coach with the Episcopal Amberjax.  She has coached year round and summer teams in the Jacksonville area for the past fifteen years.  Shannon has had swimmers qualify for several Championship meets including Sectionals, Senior Champs, FLAGS, Jr. Nationals, and the FL Swimming All Star Team.  She looks forward to building the Blue Tide Swim Team and having swimmers represent our team frequently at these meets. Shannon is a Jacksonville native who lives in Jacksonville Beach with her husband and two sons. 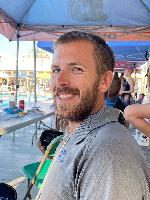 Nathan lives in Jacksonville where he has worked and swam for different teams over the years.  He has been a swim coach and lifeguard for Jaxparks Aquatics since 2009 where he has worked with various age groups as well as taught private and group lessons.  Nathan has also volunteered his time and expertise in swimming to assist both the Kirby Smith Middle School Swim Team and Southside Athletic Club.  His own swimming career consists of both Middle and High School swimming as well as 2 years of swimming with the Southside Athletic Club.  After Graduating high school he was accepted to South Georgia State College on a swimming scholarship where he holds the record for the mile. He has also participated in open water swimming events in both Hawaii and Atlanta where he was placed in the top 10 percentile. Nathan graduated with his A.A. in general education, but he plans on going back to school to study sports medicine.

Amy is the Silver Group Coach.  Amy has 20 years of experience in both swim instruction and competitive swimming.  She worked as a volunteer coach and swim instructor with the YMCA, teaching both children and adults with special needs.  She also participated as a volunteer instructor in the aquatics portion of the Special Olympics through the YMCA.  This led to her becoming the Aquatics Director for The Villages at Carver Family YMCA in Atlanta, GA.  From there, she started the Pirahnas Swim Team in Atlanta compromised mostly of children who had never swam before requiring developmental coaching and extensive training.  With the YMCA core values at the heart of everything she does, Amy is passionate about the sport of swimming and looks forward to seeing what the Nocatee Bluetide Swim Team will accomplish in the coming years.

Jeremy grew up a competitive swimmer in Illinois and spent the summers lifeguarding and giving swim lessons at the community pool.  He is a 1998 graduate of the United States Naval Academy where he spent three years on the Triathlon team.  He is currently on active duty in the Navy as a Helicopter Pilot and will retire next year after 24 years of service.  As a lifelong swimmer, he is passionate about teaching young swimmers’ proper technique and encouraging them to strive to do their best.  Jeremy believes swimming is a sport that teaches commitment, discipline, and that competitive swimming will help young athletes achieve their goals in all facets of their lives.

Tom is a 1974 graduate of Appalachian State University, in Boone, N.C.  After graduation, he moved to Jacksonville, Fl., where he taught P.E. and coached swimming at Jacksonville (formerly Southside) Country Day School.  The club team, Southside Swimming Sharks, later merged with the Bolles School and became the Bolles School Sharks, where he served as the head age group coach.  Tom moved to St. Augustine in 1982 and became head coach of the St. Augustine YMCA’s summer team which he developed into a year round team.  He was also the head coach for St. Augustine High School and Pedro Menendez High School.

After retiring from teaching and coaching, Tom accepted the position as Aquatics Operations Manager at Georgia Institute of Technology.  This continued to fuel his interest in competitive swimming as many of the nation’s best swimmers regularly competed there.  Tom currently serves as aquatic coordinator for the St. Augustine Y.  His grandson is a member of the Nocatee Bluetide.

Jack was a late bloomer to the swimming world.  He began his career as a swimming instructor and assistant aquatics director at Boy Scout summer camps and as a Boy Scout Lifeguard.   He later earned his Water Safety Instructor and has taught swimming and lifeguarding for many years.  He was an ocean/surf lifeguard for the state of Massachusetts for several years before enlisting in the United States Coast Guard. As a swimmer, Jack earned a spot as a walk on to the Northeastern University NCAA Division 1 swim team as their distance swimmer.  As a coach, Jack has coached many years as a youth hockey coach, soccer coach, masters swimming coach, and the dry-land coach for the Coast Guard Blue Dolphins age group swim team in Yorktown VA.  During his 33 years in the Coast Guard, Jack instructed lifeguarding and survival swimming skills to aircrew members, ship rescue swimmers and officer candidates at Officer Candidate School.