Martin Zubero has been with the Episcopal AmberJax since May 2014 where he serves as the head coach of the high school and club programs.

From 2002 -2010, Zubero was the Head Age Group and Assistant Senior Coach at the Bolles School in Jacksonville, Florida. During that period, Zubero was a coach for the 2003 World Championship team for Malaysia and the 2007 Pan American Games for the Netherland Antilles. The Bolles won the men's and women's state title all five years he worked with the high school program along with the high school mythical championship in 2005.

In 2011, Zubero worked for the Marlins of Raleigh where he worked with the Sr and Age Group programs based out of the Ravenscroft School in North Raleigh and most recently, Zubero was the Aquatics Director for the Spartan Aquatic Club in Orange Park. 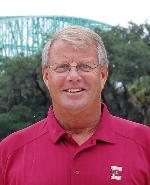 Stephanie Schuster is returning to the Amberjax after spending a year and a half as the Lead Age Group Coach at City of Mobile Swim Association in Mobile, Alabama. During her time there she coached several age group swimmers to the local LSC championship meet where there were several top 8 finishers. She has coached both the Florida All Star and Zone teams several times, as well as the head Zone Coach for Southeastern swimming. Beyond coaching she is working full time as an administrative assistant as well as pursing a degree in Emergency Management. She is very excited to be back at Episcopal with the Amberjax and is looking forward to working with the silver group.