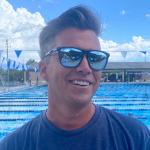 Prior to T2 Aquatics, from 2002-2010, Tom led the North Baltimore Aquatic Club’s Age Group Program to outstanding success.  Over 70 different athletes under Tom’s guidance qualified for the Maryland Zone Team during that time, and – also during that 8 year period -- 26 different athletes set over 40 Maryland State Records.  For his efforts, Tom was awarded the “Maryland Age Group Coach of the Year” award 5 times.

Tom has worked almost exclusively with 14 and under athletes, who have qualified for some of the highest level Open meets in the United States – including the U.S. Winter National Championships, Junior Nationals, and Sectionals.

Tom's athletes have been ranked in the USA Swimming Age Group “Top 10” in each of the 18 competitive Age Group events and his athletes are taught to be physically and emotionally ready to take additional steps in the sport.

Tom has been invited to attend and speak at several USA Swimming Age Group Coaches Summits and has also been involved in USA Swimming’s Local LSC government in multiple ways in his career: He has served several times as Maryland Swimming’s Head Zone Coach, as well as the Maryland LSC Board of Directors as the Technical Planning Chair, Age Group Vice Chair, and Administrative Vice Chair of the Maryland LSC government. 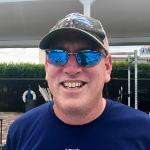 Eric became Head Senior Coach for T2 Aquatics in August of 2018. Previous to joining T2, he was the Associate Head Coach for the Sarasota Y Sharks. While in Sarasota, the Sharks won YMCA Nationals, were recognized by USA Swimming as a “Gold Medal Club”  and placed two swimmers on USA Swimming national teams.

Prior to his time in Sarasota, Eric was an assistant coach at Rollins College (Winter Park, FL) and coached for Lake Highland Preparatory School (Orlando, FL) and Highlander Aquatics. During his time in Orlando, Lake Highland placed runner up at the Florida High School State meet and Highlander Aquatics placed in the Top 10 combined teams at the Junior National championship meet twice. From 1997-2008, he was the Head Coach and General Manager for the Wichita (KS) Swim Club. It was there he coached Caroline Bruce to the 2004 US Olympic Team and Jarrett Perry to a Gold Medal in the Paralympic Games. Wichita Swim Club was also recognized as a “Gold Medal Club”.

Eric has served in leadership capacities at the local, regional and national levels including sitting on the USA Swimming Board of Directors from 2002 to 2007.  He is known for building quality swim programs and successful swimmers including NAG Top 16, Junior National, Senior National, Varsity, College and International levels. Eric was named six times “Coach of the Year” for Missouri Valley Swimming, three times named “Coach of the Year” for Region VIII Swimming and part of the USA Swimming National Team Coaching Staff 2004 – 2008 and 2017- present. He is a member of the American Swim Coaches Association and holds a Level 5 certification.

He has a BA in Political Science from Wichita State University and was a Varsity Swimmer for University of Kansas.

T2 is extreemly lucky to have our senior athletes under Coach Eric's guidance.  He brings a wealth of swimming knowlege and experience with high level swimming to our team!

Kevin Erndl is the Founder and President of T2 Aquatics.
After starting his coaching career in 1997 with the Augusta Swim League, Kevin became a YMCA of the Palms Coach at the Norris pool in 2005.  Kevin has been the driving force behind the creation of T2 Aquatics since that time; he has led the charge for Capital refinements at the Norris Pool, hired the current T2 Aquatics staff, and has overseen the Management of the Club in every way.
As a Coach, Kevin has spent time on deck with every level of T2 Aquatics athletes.  After the 2008-2009 season, Kevin was named to USA Swimming's National Team Coaching Staff based off the accomplishments of his athletes.
In August 2009 Kevin coached Erika Erndl to a US Open Meet Record in the 100 Meter Freestyle, helping Erika earn a spot on the 2009-2010 National Team.  Kevin’s coaching philosophy is geared toward refining an athlete’s stroke, and developing a training plan that enables T2 Athletes to swim with optimum proficiency and skill.
A graduate of the University of North Carolina – Chapel Hill, Kevin was a First Team All-ACC swimmer for the ‘Heels. Having competed in the 1999 NCAA Championships and the 2000 US Olympic Trials, Kevin has been involved as an athlete at the highest level of swimming offered in the United States. As a High School student, Kevin was named the NISCA National High School Swimmer of the Year in 1997.
Kevin earned his UNC degree in Economics, and is a full-time Portfolio Manager – as well as the Founder and Director of T2 Multisport for Tri-athletes.  In his spare time, Kevin has enjoyed competing in  Triathlons – having won the 2008 Heartland Triathlon in Sebring Florida, as well as qualifying for the 70.3 World Triathlon Championships in 2007 and a 2007, 2008, 2009 USAT All-American.

Maria handles many things on the “dry-side” of T2 Aquatics.  Helping with registration, assisting with administrative tasks, coordinating volunteers for our meets, and helping parents navigate the “in’s and out’s” of competitive swimming are just some of her duties.

Maria is a long time T2 Aquatics parent and has a wealth of knowledge on not only competitive swimming but also the inner workings of T2 Aquatics.  She is your “go to” person at T2 if you ever have any questions!  You can reach her at maria@t2aquatics.com.

Rachel joined the T2 Staff in January of 2016, after having graduated from the University of South Carolina in 2015, where she earned 4 Letters in Swimming to go along with a Degree in Public Health.

Rachel was a T2 Aquatics athlete at its inception in 2010, and has competed in SW Florida for her entire swimming career.  Rachel is also T2 Aquatics first FHSAA High School Champion, having won the 50 Freestyle for Gulf Coast High School in 2011.

Coach Rachel works primarily with our Intro and Age Group Development training groups, while helping out at times with our AGP group. 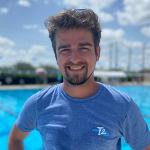 Marshall joined the T2 Staff in August of 2018.

Marshall was a member of T2 Aquatics as an age grouper and has continued to pursue swimming through coaching.  He has many years of experience with our Naples Swim School as well as being the Head Coach of the Sanchez Casal Alligators Summer Team and an assistant coach with the Community School Swim Team in addition to working with T2 Aquatics.

Marshall has always pursued teaching and is currently teaching at the Community School of Naples (CSN).  He is also a proud Eagle Scout of troop 243 - learning perseverance, honor, and leadership.

Marshall is one of the most experienced coaches in all ages in Collier County.  He works primarily with our Introduction and Age Group Development training groups and we are excited to have Marshalls amazing energy and positivity on our pool deck!

Gregg joined the T2 Staff in the Fall of 2017.  Gregg graduated from Kent State University with a degree in Municipal Recreation.  He taught at Bonita Middle School from 1979 through 2014 when he retired from teaching.  Gregg also has over 35 years of coaching experience.  During that time he has coached at Kent State, Richmond Heights Swim Team Seacrest Country Day School as well as several USA swim teams in Southwest Florida.

Coach Gregg is on the USA Swimming Open Water Developmental Committee and has twice been awarded the USA Swimming Glenn S Hummer Award which recognizes contributions to long distance swimming.

We are lucky to have a greaet swimming "lifer" on our staff bringing tons of experience teaching and coaching athletes of all ages to our pool deck!

Elizabeth joined our Masters and Age Group staff in February of 2020.  Elizabeth is originally from New York and recently moved to Naples from San Francisco where she was coaching both the Masters and Age Group Swim Team at the Presidio YMCA.  Elizabeth has a passion for athletics and not only swam in college but also has over 20 years of martial arts training - in which she has earned her black belt.
Elizabeth has her Masters in Business Administration and is currently working towards her Masters in Human Nutrition.
We are very excited to have Elizabeth move into the area and start working with our T2 Aquatics athletes!

Kim, born and raised in Boston, has been coaching with T2 Aquatics since 2018.  Kim grew up swimming at Hyde Park YMCA and then later swam and played water polo for Boston College where she graduated with the class of 1979 with a degree in Special Education – and later getting her Masters as well.  She worked as a special needs teacher until retiring in 2018.

Kim has coached Age Group, High School and Masters for the last 20 plus years in the Greater Boston area.  She has been a High School MIAA coach of the year in 2014 and will be inducted into the New England Masters Hall of Fame in the Spring of 2020!  Kim has held several NE Masters records in Backstroke and IM over the course of almost 40 years.

T2 is very lucky to have Kim’s passion and love of the sport of swimming on our pool deck.  She obviously has a great knack for speaking with and helping people – no matter if they are a beginner or one of our more “experienced” Masters athletes.