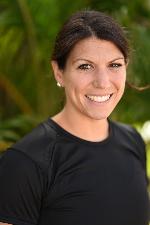 A native of the state of Maryland, Marina Falcone’s roots are in Potomac.  At a young age, she found her niche in competitive swimming and quickly became a standout in a number of distances and events.  Her career took off in high school and today she continues to compete in master’s swim meets and open water competitions.

The water is her true passion and she dedicated her efforts to swimming while on the William and Mary Swim and Dive Team (2005-2009).  Marina’s hard work and consistent training paid off with multiple school records and top NCAA finishes. She was the first woman in the history of William and Mary to break 5:00 in the 500 Yard Freestyle.

Marina continued to train and compete post college under direction the of Paul Yetter with T2 aquatics in Naples, Florida at the national level from 2011-2012 and with NCAP (Nations Capital Swimming) from 2012-2014.  She swam under the direction of coach, Bruce Gemmell who also coached olympian, Katie Ledecky.

A coach as well as a competitive athlete, Marina shared her passion by working with young swimmers in the Montgomery County area.  She coached aquatics intro groups as well as competitive youth programs for many years.

She holds a BA in Kinesiology from William and Mary and has spent the last 10 years in the fitness industry as a personal trainer and group exercise instructor. Marina has been coaching at Berkeley Prep for one year involved with the barracudas club team, high school and lower division swim programs.