Cashel is in her 16th year as Head Coach of WFLA.  Prior to coming to WFLA in April of 2000, Cashel was the Head Coach of Maclay Aquatic Club in Tallahasse, and an Assistant Coach at Florida State University.  Cashel graduated from Drury University in 1993, at which time she moved to Florida to take the job as Head Age Group Coach for the Clearwater Aquatic Team.  While at Drury, Cashel was a member of the Drury Women's Charter Swim Team.  Outside of her love of coaching, Cashel enjoys spending time with her family, which consists of her nine year old son Keegan,  three dogs, two cats, a bird named Lightning, and a Rabbit named Ollie. She enjoys boating and camping. 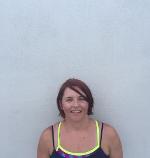 Coach Sarah joined the WFLA Coaching Staff in the summer of 2016 as a summer league coach.  She began coaching summer league and club swimming (at CAT at the Long Center) while she was in high school, where an injury turned her focus from swimming to coaching swimming.  As a swimmer, with the Clearwater Aquatic Team, Sarah was a junior national level butterflier.  She always had a remarkable work ethic (Cashel was one of her coaches :)).  Sarah has a bachelors degree in medical technology, and a Master's degree in psychology.  She works in the laboratory at John Hopkins All Children's Hospital.  Her passion for the sport of swimming has brought her back to the pool deck, where WFLA is fortunate to have her working with our Bronze, Silver, and Gold swimmers. Sarah is an animal lover, whose fur kids consist of two french bulldogs and two cats. 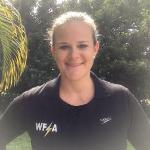 Anna joined the coaching team at WFLA in the fall of 2013. She grew up swimming on summer leagues and swam for her high school swim team in New Mexico. She currently trains with the WLFA masters group and participates in distance open water swim events, including the annual Tampa Bay Frogman 5K Swim. Outside of the pool, Anna is a full time speech therapist who loves cycling, coffee, the beach and boating!

Roseann's coaching career began in 1973 where she was the head girls swimming coach at St. Petersburg Catholic High School in St. Pete.  She then became a graduate assistant swimming coach for both the men and women's teams at Bringham Young University from 1976 - 1977.  Roseann moved to California to become the assistant men and women's swim coach at San Diego State University from 1977-1978.  She later served as the Head Swimming and Diving Coach at James Madison University in Harrisonburg, Virginia.  Following a five year stint at James Madison, Roseann became the graduate assistant coach for the men and women's swim team at Southern Illinois University (1986 - 1989).  She then returned to California as the head swim and dive coach for San Jose State University (1991-1999).  Roseann then moved back to Florida where she acted as assistant coach and interim head coach for WFLA.  Upon leaving WFLA, Roseann returned to BYU, where she has lived, taught, and coached for the last 17 years.

Roseann has a B.A. in physical education, with minors in history, biology and a k-12 teaching certification.  She has a M.S. in exercise sciences with a minor in health sciences, and a PhD from SIU Carbondale in community and school health with an emphasis in nutrition.  Upon returning to BYU this last time,  she then pursued a M.A in ancient new eastern studies with an emphasis in religious education (BYU).

Roseann has coached swimmers at all levels, and has been the recipient of numerous awards in both academics and coaching.

Roseann has spent the last several years coaching age groupers and is excited to join the WFLA coaching staff as our Head Age Group coach.