Raised in Altamonte Springs, Florida, Charlie was registered as an athlete with Florida swimming for 17 years. As an athlete,  4 national age groups records, 4 individual State records, and over 30 top 16 USA finishes in his career.

He attended Florida State University were he received his BS Degree in nutrition and fitness and completed the Didactic requirements. He also swam for FSU and twice was an NCAA All-American.

He then went on and was the Grad Assistant Coach for FSU from 1991-1992. In 1994 he was the Assistant Coach of the USA swimming's Blue Doflins of Orlando and in 1995 became the Head Branch Coach for the Oviedo pool. From 1995-present, Charlie is the Head Coach for Oviedo High Swimming and water polo teams. He is the head coach for Blue Dolfins at the Oviedo branch. In 2017/2018 recieved Florida Swimming's Senior Coach of the Year award.

Charlie enjoys coaching, fishing and time with the family. He is married to Renee and has 2 daughters, Carlie who swims at Harvard University and Marin a junior who has committed to swim at the US Naval Academy. 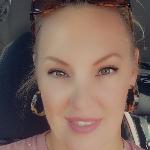 Jen started swimming at what’s considered late in life in the swimming world, at the age of 12 for Trinity Aquatics with Chuck Burgess. It didn’t take her long to fall in love with the sport. Even so, she unfortunately left the sport at the age of 14, but came back two years later and has never looked back. Specializing in breaststroke and sprint freestyle, she swam under Coach Kevin Meisel at Winter Park High School her freshman and sophomore year, took her junior year off and ended up swimming for Edgewater High School her senior year. That year she went to States on the medley relay for breaststroke.

After high school, Jen went to Valencia Community College. She still trained in swimming and as a matter of fact with Blue Dolfins. Her coach was Paige Brunault, who broke off from Blue Dolfins and got her own team, Streamline Aquatics. Jen was generally the oldest swimmer on the team and seemed to naturally take the younger swimmers under her wing, and even won the Leadership Award. Coach Paige asked Jen to help out a few times and the coaching bug bit her. Swimming was great, but to Jen, coaching was even better.  Starting out at the age of 17 with a group all her own, she ended up taking a few of her swimmers to Flags (it was JO’s back then) at the age of 19.

Following graduation from Valencia with an Associate’s Degree she went down to Boca Raton to attend Florida Atlantic University. With her sporadic swimming career and some shoulder injuries along the way, she was unsure about being able to swim for FAU, but with a lot of determination and hard work, she walked onto the team. She swam for a year there, graduating in 2002 with a Bachelor’s Degree in Criminal Justice.

Eventually, she started coaching as an assistant coach with a summer recreation league as well as doing private lessons. From there her coaching took off as she became the head coach for Boca Raton High School from 2003-2005. She had great success, receiving Coach of the Year her first year there, with State teams for the boys and girls both years and even had a 3rd place finish with her girl’s team at Districts in 2004. She was also the head coach for the Boca Raton Manta Rays (summer recreation league), and the Boca Raton Masters.

A few years later, Jen went a little further down south to the Palm Beach area and coached for Gordan Andrews with Lake Lytal Lightning. In 2010 she was getting ready to become the Aquatic Director for the Boynton Beach YMCA, but some family health issues brought her back to Orlando. Once she got settled back in Orlando she knew she had to start coaching again and has been coaching with Blue Dolfins since October of 2011. That same year she met Quentin Dixon and they married in April of 2014. They have a beautiful daughter, Kailani, born in March of 2013.

Jen loves coaching and has such a passion for the sport of swimming.  She enjoys the beach, reading, spending time with her family, music, movies, and just life in general.

Raised in the Fort Lauderdale area, Eric started swimming at 8 years old because a friend wanted to join a swim team, but didn’t want to do it alone.  As an age group swimmer he set 2 LSC records and was Junior Olympic high point winner as a 12 year old and as a 14 year old.  He won Junior Nationals at 17 in the 400IM with a meet record.

Eric swam for Western High School and was a 4 time High School All-American.  He was runner up 5 times and state champion in the 500 free.  His senior year he was selected to compete in the prestigious NISCA meet in Chicago where he placed second and fourth in his individual events.

He went to the University of Florida, where he received his BS in Business.  At Florida, he was a 4 time All American swimmer and placed 4th at NCAAs in the 400IM.  In his senior year, he received the Skip Foster award for the Most Valuable Swimmer.

Eric still swims competitively today and is an active Masters athlete.  He is a 17 time Masters National Champion and the current World Record holder in the Short Course Meter 400IM.  He is a ‘lifer’ and will never stop swimming.

Eric has been lucky enough to be coached by a lot of great coaches including 5 Olympic coaches.  They all had their own style and ways of coaching.  He tries to incorporate all of his past coaches into his own personal coaching philosophy.  His motto for swimming and life is:  work hard, work smart, smile often, and good things will happen.

Eric met his wife, Jennifer, when he was 10 years old and has been married to her since 1998.  He has two boys that are both Blue Dolfin swimmers.  In his free time, he enjoys spending time with his family and cycling.

While at HSA the age group program exponentially grew from having zero 10 & under championship qualifiers in 2015 when I arrived to consistently producing sixteen 10 & under championship qualifiers for both short course and long course. My group of 10 & under girls have won the Southeastern Championship the last 3 years, and the boys have won two Southeastern titles. This past short course season I coached the fastest 9 year old girl 50 butterflyer in the nation as well as two top 10 nationally ranked girls in the 100 butterfly. With the help of my 10 & under group, HSA was able to win the Southeastern Championship for the first time in 32 years. Due to my group’s performance at the championship meet I was nominated for age group coach of the year in our LSC.

I am very excited to be back where my sons grew up and coaching a team I have watched from afar ever since I left in 2015. I am looking forward to seeing old faces again and meeting those that are new to the program.