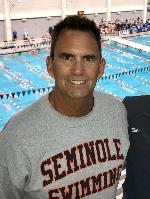 In addition to his head coaching role at Seminole Aquatics, overseeing all aspects of the training programs at SA, Coach Ackerson coaches the Senior and Senior Elite Group swimmers.  He also serves as the Head Coach for Seminole High School’s outstanding swimming teams.  A former high school All-State swimmer and All-America water polo player, and a collegiate All-American swimmer at Hendrix College (AR), Coach Ackerson received his Master’s Degree in Exercise Physiology from UCF before coming to Seminole High School to coach in 1987.  A member of the American Swim Coaches Association and the National Interscholastic Swimming Coaches Association, Coach Ackerson has been awarded S.A.C. Coach of the Year honors 17 times, and he was the inaugural recipient of the 2001 Florida High School  Swimming "Coach in the Community" award.  During his tenure at Seminole, Coach Ackerson's teams have won over 35 combined Conference, District and Regional championships in swimming and water polo, and the swimming and water polo teams at Seminole High are perennial State Top Ten team finishers.  During his 30-plus year career, he has coached multiple Junior Olympic/ Florida Age Group champions, and several National Top 10 Age Group swimmers, a National #1 age group swimmer, several Junior National and Senior National Qualifiers, U.S. Olympic Trials qualifiers, individual and relay Florida Swimming state record-holders, 21 Florida High School State Champions, over 50 NISCA High School Swimming All-Americans, a two-time State high school record holder, and a NISCA Water Polo All-American.  In 2014, Coach Ackerson was inducted into the Seminole High School Athletic Hall of Fame, and he lives in Lake Mary with his wife, Tami, where they are the proud parents of three great kids, and the owners of several spoiled pets.

Coach Scott began his swimming at the age of 5 and swam most of his age group career with the Sarasota YMCA Sharks.  While with the Sharks he set seven state records and one Junior Olympic record.  He went on to compete for Clemson University as a scholarship athlete where he set team records and qualified for the NCAA Division I Championships for the 100 and 200 yard Breaststrokes.  After graduation Coach Scott continued to stay active with his swimming as a form of exercise.  Coach Scott enrolled his children on the Seminole Aquatics Swim Team in 2009 and decided at that time to enter Masters competitive swimming.  He is now ranked in the top 10 in the nation in numerous events and has had two relays finish fourth in the world.  Coach Scott travels the country to compete in national/world meets and will continue to keep swimming in his life for many years to come. 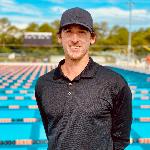 Dimitri Delazanos is a lifelong swimmer and wellness enthusiast. Dimitri has been an active Masters Swimmer for the last decade and enjoys the benefits of swimming as a lifetime sport. When Dimitri isn’t swimming he can be found teaching middle and high school PE in Seminole County. He has been honored with multiple teaching awards including; 2019 Keys to Your Character - Teacher Character Education Award and 2018 Wellness Teacher - Seminole Public Schools. Dimitri’s goal for his athletes and swimmers is simple, to have fun. He believes that fun and enjoyment will bring forward the best results! 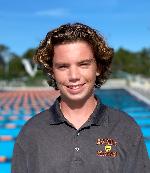 Coach Ryan Ackerson comes to us after having spent his childhood in the Seminole Aquatics system, having learned to swim at the Aquatic Center when he was three years old, and then swimming competitively in Age Group 1 as a five year old, and working his way up through our age group system.  By his senior year at Seminole High, Coach Ryan was a NISCA All-American in both swimming and water polo, and an FHSAA 4A high school state finalist in the 50 freestyle, and a qualifier for the USA Swimming Futures Meet.  He is proudest of being a part of eight District team titles in both sports, despite also having been named as the Seminole County Water Polo Player of the Year in 2017 and 2018.  Coach Ryan carries both USA Swimming and USA Water Polo certification, and in 2020 he was tapped to become the Head Coach of Seminole High's Water Polo teams.  He currently serves on the FHSAA Advisory Board for high school water polo.  Coach Ryan is currently studying Exercise Physiology at the University of Central Florida, where he also plays Water Polo for the Golden Knights.