T.B.A.C. Brandon Head Coach and Program Director - Dave Gesacion is an ASCA Level 5 certified coach and has coached at; the Longhorn Swim Camp in Austin, TX, Clemson University, NITRO Swimming in Austin, TX, Tampa Bay Aquatics (TBAY), and formed the most recent Tampa Bay Aquatic Club (TBAC). As a coach he was the 2006 Speedo Long Course Junior National Champions Associate Head Coach and 2007 recipient of the ASCA Award of Excellence. Coach Gesacion has had swimmers particpate in the last 3 US Olympic Trials (2012, 2016, 2021).  In addition, has had athletes compete at World Championships, make the US National Junior Team and represent Team USA at Junior World Championships.  Former swimmers under Coach Gesacion have swum at or are now swimming collegiately at Indiana, Florida, Florida State, Georgia,Purdue, Texas, North Carolina, Clemson, Navy, Kentucky, University of Tampa, University of Cincinnati, University of West Florida and many more.

Coach Gesacion is experienced and skilled in maximizing swimming careers for swimmers at all levels of skill and ability. To learn more about Coach Gesacion, click on the "About Us" tab. 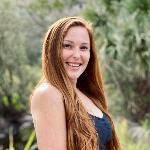 Kelsey has been a competitive swim coach for 6 years, training some of Florida’s top ranked teams.  She has been a Head Coach leading, developing, and organizing training plans for swimmers of all ages and abilities.  Also certified Water Safety Instructor (WSI), she will play a large role in strengthening our already established Junior Bolts Developmental program.

Kelsey is also a NASM certified personal trainer with a specialization in strength and conditioning. She was a competitive swimmer for 15 years. As the captain of her high school swim team she led her team to back-to-back undefeated seasons and hopes to bring that same style of leadership to the pool everyday. She continues to compete in triathlons as well as open water competitions that range up to 10 miles.