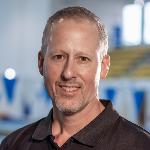 Coach DeMott began his tenure as Head Coach of Blue Tide in 1997.  In that time, he has led the team to two Georgia Age Group state championship titles, and a number of top 3 finishes.  Under his direction, five athletes have participated at Junior Nationals, four at the U.S. Open and one at the Olympic Trials.  Coach DeMott has served as Secretary and National Times Database Administrator for Georgia Swimming.  Before coming to Blue Tide, DeMott served as Head Coach of Harford County YMCA in Maryland, where the team experienced growth from 50 to more than 180 swimmers, including as many as 24 athletes qualifying for YMCA Nationals in a single season.  DeMott's competitive experience culminated at Iowa State University, where he was a member of the swimming team and graduated from in 1991 with a Bachelor's degree in Exercise Science.  In 1990 and 1991, DeMott was awarded Academic All-Conference honors.