Coach Travis Sandifer has 25+ years of swim coaching experience and is an ASCA level 4 coach. He has spent most of his coaching career in the GULF with USA Swimming Clubs, 20 years with KATY Aquatics as both Head Age Group and Head Coach. He has also coached at Aquastar and Pearland Aquatics. During his coaching tenure, Coach Travis has developed swimmers that have competed and excelled at many levels ranging from local age group meets, TAGS Champions, Junior National and US Open Finalist to competing at Canadian and USA Swimming Olympic Trials.

Coach Travis has stayed actively involved in swimming governance holding various positions on USA Swimming Committee’s and the Gulf LSC Board of Directors. He currently serves on the Gulf board as Operational Risk Coordinator.

Coach Travis has a degree in Economics from the University of Houston. He enjoys fishing, kayaking and camping in his spare time. He has a daughter Paige, who recently graduated from Texas A&M University and has continued to live and work in College Station, Texas.

Angela began coaching in 1995 as an Assistant Coach for the Cimarron Swim Team for three years, and then continued as their Head Coach for five more years. While attending the University of Houston, Angela coached at Katy Aquatics and Alief Aquatics in the late 90's. In 2010, Angela returned to Katy Aquatics as a competitive Coach. Then in 2013, she began a new chapter with Katy Aquatics as their Team Administrator.

Angela grew up in the Katy area where she participated on the Cimarron Swim Team for 13 years.  She was also a member of the Katy High School Swim Team where she gained the love for swimming with all of the challenges and excellence of being an athlete. She has enjoyed watching the growth of swimming in the Katy area, and looks forward to the future with Katy Aquatics.

Coach Bailey has been coaching in the Gulf for over 25 years.  He has served as both Head Age Group and Head Coach for several of the teams in the area and received the honor of Gulf Age Group Coach of the year in 2003 & 2004.  Coach Bailey began his swimming career in 1984 with First Colony Swim Team, qualifying and finaling at Junior Nationals.  He went on to swim at Henderson State University.  He has two boys ages 8 and 12.

Tanja has enjoyed swimming nearly all her life, literally spending summers during her youth in a pool. Quite by accident, she discovered her love for competitive swimming in high school and swam for her school's team in Cedar Rapids, IA. Tanja had a successful swimming career excelling in most sprint events. Starting at age 15, carrying through to today, Tanja has been a lifeguard, swim lessons instructor, and swim coach, loving every opportunity to teach her love of swimming and encouraging young swimmers. She graduated from the University of Iowa in 1995 and started a 25-year career with the University of Iowa, first with the University of Iowa Hospitals and Clinic (1995-2015) and then with UI Recreational Services and Iowa Flyers Swim Club (2011-2021).

As IFLY’s Head Age-Group Coach, Tanja developed swimmers that have competed at many levels ranging from local meets, LSC Championship Meets, Central Zones Championships, Central Zone Open Water Championships, NCSA Age Group Championships, and Sectional Meets.  Many of IFLY’s swimmers who started out with Tanja have gone on to swim collegiately, as well as competed in meets ranging from international meets to the TRY Pro Series, Junior Nationals, NCSA Junior Nationals, and the Olympic Trials.  Despite the amazing successes of her age-group swimmers, Tanja’s love to encourage, teach, and push swimmers goes beyond the big meets. What drives her is coaching and mentoring confidence, grace, a sense of community, and life lessons that will carry swimmers far beyond the pool deck.

Tanja enthusiastically joined the Katy Aquatics family in the spring of 2021 and looks forward to bringing her love of the sport and helping swimmers grow beyond the pool deck.

Tanja’s involvement with swimming goes beyond the club.  While in Iowa, she held several positions within Iowa Swimming, Inc. and continues that tradition with Gulf Swimming.  These positions included:

Tanja has two college-age children, both of whom attend Iowa State University (such a proud parent!!), and while she and her husband are empty-nesters, their dog keep them on their toes! 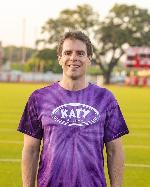 Christian began his coaching career with TXLA and has been a swimmer and coach in Texas since the early 90s. Coach Christian’s swimmers have achieved cuts at the TAGS, Sectional, Futures and Junior level.  Most importantly, Coach Christian wants those he coaches to improve while enjoying their swimming experience!

Prior to joining the coaching world, Coach Christian earned All American honors swimming for the University of Texas and represented Mexico at the 2012 Summer Olympics in London.  While earning a degree in Kinesiology at UT, Christian competed in the World University Games in 2003 and the Pan American Games in 2007. As a professional swimmer, Coach Christian competed in both the 2012 and 2013 World Championships.

Valerie began her coaching career in San Antonio in 1990, for the Alamo Area Aquatics Association under the former Head Coach, George Block. In 1996 she moved to Houston and started coaching with Clayton Cagle for the Cy-Fair Swim Club for eight years. During this time Valerie coached the Cy-Falls and Cy-Creek High Schools. She then began with Sienna Plantation Aquatics before joining the Katy Aquatics Swim Team. Valerie has been coaching as an Assistant Coach with Katy Aquatics since 2010.

Valerie was raised in San Antonio, where she swam and played water polo for Tom C. Clark High School. Each year during her high school career she qualified for State. She then went on to be a collegiate swimmer for two years at Slippery Rock University in Pennsylvania. Valerie was on the Women’s US Water Polo Nation Team for six years, and played in the 1984 Olympics. 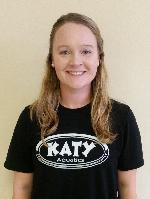 Jenny grew up in Houston and began swimming competitively at age 6.  She fell in love with the sport and swam for Blue Tide Aquatics through high school. She swam in college for John Brown University and qualified for NAIA Nationals all 4 years. After college Jenny continued to swim and began competing in triathlons and open water swimming. She taught outdoor education for seven years and then began coaching for Tyler Rose Aquatic Club in Tyler, TX. In 2018, she moved back to Houston to begin coaching with Katy Aquatics. She has coached a variety of age groups from 10 and unders to Masters; and she loves having the opportunity to teach, encourage, and support others as they work towards their goals. 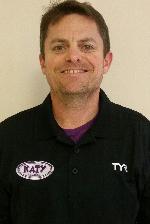 Coach Mike returned to Katy, TX and KATY Aquatics in the Fall of 2018 after 26 years serving the country and seeing the world. Mike swam competitively for Katy High School and KATY Aquatics before heading to Annapolis for four years to earn his B.S. in Computer Science and a commission in the Navy. He retired in 2016, having completed a 20-year career, including 2 years living in Japan, 6 years of flight instructor duty, three years teaching aviation safety, and an M.B.A. along the way.

Though not directly involved in competitive swimming during his Navy time, Mike remained connected to the water (or frozen water) and water/snow sports, participating or competing in water polo, competitive rowing (Navy crew coxswain), sailing, windsurfing, wakeboarding, snowboarding, kayaking, SUP, and scuba diving. He became a certified scuba instructor in 2012.

Mike is currently the lead coach for Senior I and Age Group II Black. 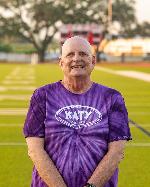 This is my second year with Katy Aquatics, and 40th year of coaching the sport I dearly love; which includes High School, Club, and Summer League.
I am a native of Chattanooga, Tennessee and hold BA and M Ed. degrees from the University of Tennessee (GO VOLS).
I swam for 13 years, at all levels, High School, Summer League, and AAU (yes, I am that old). My favorite and best events were; 100 Fly, 100 Back, 200 IM, and 200 Free. Also, I was captain of the Football and Soccer teams, at Notre Dame High School, where I lettered in five sports.
I just retired from teaching High School after 26 years, with the last 20 years with Fort Bend ISD. Away from swimming, I like to spend time working out, traveling, reading, attending concerts and sporting events. Still involved with Masters Swimming and loving it. Please feel free to contact me with any questions.
I am looking forward in coaching the Age Group I program and watching them improve during the course of the swim season. 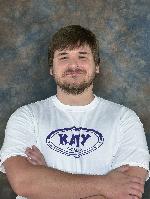