PEAK Coaches & Board of Directors

John Burke joined the Pearland Aquatics staff in March of 2008. An ASCA level 4 USA Swimming and Age Group coach, John is the primary coach of the Gold group, but helps out with most aspects of the program. Previously, John was an age group coach in Maryland with the North Baltimore Aquatic Club and age group coach and founder of the Annapolis Swim Club. In Maryland, he coached swimmers who placed in the top eight and won events at the Maryland All Star and the Eastern Zone meets. His swimmers have also been ranked in the USA Swimming top 16, and top 10 lists. He also served on the Maryland Swimming Board of Directors as the Age Group Chair.
John moved to Texas in August 2006 to be the Head Assistant Coach with Aquastar where he also helped out in most aspects of the club.  Since being in Texas, John has coached swimmers who have qualified for Sectionals, NCSA Junior Nationals, Winter Juniors, Long Course Juniors, Olympic Trials, won TAGS, have been finalists at the Southern Zone Age Group and Senior meets, and have been ranked in the USA Swimming top 16, and top 10 lists. John coached Adriel Sanes who represented the U.S... Virgin Islands at the 2015 FINA World Championships in Kazan, Russia, and the 2017 FINA World Championships in Budapest, Hungry.
John is a at large member on the Gulf Swimming board of directors, and is on the Club Development committee.
John met his wife Ann while they were coaching at the North Baltimore Aquatic Club.  The Burkes reside in Pearland with their children Emma, Klara, Anna and Jack.

Coach Ann brings a lifetime of experience and education to the pool deck.  She has been passionate about the sport since she was a young girl and has experienced  it as an athlete, coach, and parent. She originally started coaching with a summer league team during her college swimming days and has continued working with swimmers ever since.  In addition to her time in the swimming world, Coach Ann has also served as a junior high educator.   Coach Ann draws upon her experience in education to provide focused, objective-based instruction daily to PEAK's swimmers.

Coach Natalie began her swimming journey with Alvin Aquatic Club at the age of seven. She later joined Angleton Aquatic Club and swam for honors such as Sectionals finalist, Junior Nationals qualifier and Texas Age Group (TAGS) Champion. She swam for Alvin High School for four years and continued her swimming career at Texas Christian University where she graduated with a Bachelor’s of Science degree in Psychology and a minor in Communications. She worked for Pearland Swim Academy while in college and was the head coach of Alvin Aquatic Club for three summers prior to joining PEAK. 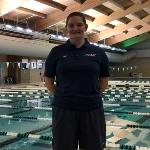 Coach Caitlin began swimming with the Alvin Aquatic Club summer league team at the age of nine. In high school she swam for both the Alvin High School swim team and the Angleton Aquatic Club USA Swimming team. She continued her swimming career at Centenary College of Louisiana where she graduated with a Bachelor’s of Arts degree in English and a minor in Spanish; while on breaks from college, she returned home to swim with Pearland Aquatics (known at that time as Synergy Aquatics). Coach Caitlin has been coaching for Pearland Aquatics since 2009 and has experience teaching swim lessons as well with both the Pearland Swim Academy and The Aquatic Academy. When she is not at the pool, she is a Language Arts Instructional Coach and 6th grade teacher in Alvin ISD.

Coach Charyl has been swimming since the age of 3, and along with 4 siblings, swam competitively. At 16, Charyl started her professional career in aquatics as a  lifeguard, summer league swim coach, and Water Safety Instructor. For the next 10 years, Charyl worked for the City of Columbus, Easter Seals of Ohio, The Ohio State University, and the YWCA of Columbus. She coached several Swimming and Diving teams, certified numerous lifeguards and has taught over 1000 people how to swim.

After getting a Bachelors of Science in Computer Engineering Technology, working at NASA and Apple Computer, Charyl started a family.  Once her neighbors realized she taught her children to swim as toddlers,  they asked her to teach their children as well.  Through word of mouth, Charyl was able to build The Aquatic Academy, LLC,  her home-based swim school.

Charyl continues to bring her passion for swimming as a coach with PEAK.  Her daughter, Leia, is a current team member.

Coach Thuc started swimming at the age of 4 when he lived in Vietnam. He swam through high school at high levels of competition. At the age of 20 he moved to the United States with his family. He began his college career at San Jacinto College and is continuing his studies at Texas Southern University. Prior to coaching with PEAK, he was employed as a head lifeguard at Pearland Natatorium. While working as a lifeguard during PEAK practices, Thuc realized he wanted to share his passion for swimming with PEAK swimmers.  Coach Thuc joined PEAK in summer 2016 and works with year-round team, tech-fit, and summer team programs.