I’m Coach Kris and I am the Head Coach for the Houston Area Life Times. I have been with Life Time since March of 2018. I’ve coaching here in the Gulf LSC in Houston for 17 years. I was born in raised in the Houston area. I learned how to swim at a very young age where I developed a passion for the sport. We are a swimming family. My father is a Head Coach and Brother a Head Age Group Coach in the area. My two kids Erin (13) and Rowan (11) also swim and compete at meets as well for Life Time Swim Team.

The kids I have coached range from Learn to Swim all the way to Olympic Trials. I believe in encouraging each swimmer to pursue their goals and abilities positively. The sport of swimming is something that each person can take with them for life. I try to teach the swimmers qualities such as: dedication, determination, time management, goal setting, team work, and sportsmanship.

When I am not coaching you can find me in the country fishing, hunting, and anything outdoors.

Marvin Contreras, began coaching career in Katy TX in 2011. He started at Katy Aquatics and MAC swimming instructor and Coach Assistant. In 2016 as former Head Coach at Cinco Ranch Lifetime Fitness. He is a member of ASCA 2 and USA Swimming Coach Association. He went to University of Phoenix and achieve his MBA. This is the 2nd  Year of coaching with Lifetime Fitness and happy to see the results of our swim team. Marvin and His wife, Ana have two Girls name Daniella and Gabriela. He has enjoyed watching the growth of swimming at Life Time Fitness on the Golf Coast area, and locks forward to the futures with Life Time Fitness Aquatics

Lea Carroll is the Head Coach at Life Time Champions. She began swimming for her local swim club at the age of 10 and continued to swim through high school and masters in college. She has coached summer league and USA Swimming teams a combined 13 years. Throughout those years she coached many TAG swimmers and has had several team divisional wins as well as team wins at invitational meets. She has 3 children 2 of which are swimmers. Her daughter Jolee swims for Life Time now. Her passion is helping swimmers reach their full potential. Coach Lea is excited to have the opportunity to be able to train at a state-of-the-art facility. Life Time gives her the advantage to implement tools into her workout program to help each swimmer reach their goals. 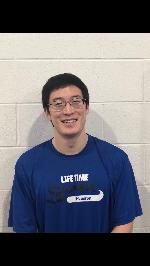 Justin Tang swam competitively for fourteen years.  As an age grouper, he mostly trained under Dick Shoulberg’s Germantown Academy Aquatic Club in Fort Washington, PA.  He competed for Germantown Academy in high school where his main events were 200 IM and 100 Fly.  For two years, he swam at the collegiate level with Johns Hopkins University.  In the 2012-2013, he set a new pool record in the 400 IM and placed fifth at DIII Nationals in the 500 Free.

Justin began coaching, informally, in middle school as a youth instructor for Special Olympics athletes at Abington High School in Abington, PA.  During high school, Justin worked one-on-one with a student to progress from water safety to competition.  He also spent one month shadowing a YMCA swim instructor with a focus on infant water safety.  In the summer of 2013, Justin worked alongside Coach Sean Kelly at Philadelphia Sports Club High Point. With the Stingrays, Justin executed daily workouts, coordinated meets, and held one-on-one lessons.

I am the head coach of Life Time Swim Team Sugar Land. I am currently a student at Wharton County Junior College with plans of transferring to the University of Houston by fall 2017. I will be majoring in Kinesiology and would like to use my degree to study competitive swimming.

My love for swimming started at a very early age. My mom believes it first started when we visited our family in Trinidad and Tobago and I was about 3 years old. My mom said I was completely fearless of the water. After I completed swimming lessons she put me on a summer league swim team. I began competing for the Mission Center/Lakemont Marlins when I was about 8 years old I stayed with this team until I was about 13. Through summer league I found my initial love for swimming. After summer league, I began to take swimming more seriously, so I joined a club team named Sienna Plantation Aquatics. This is the first time I was officially part of USA Swimming. I then moved to another team, Southwestern Aquatic Team, the summer before my first year of high school. For my first two years of high school, I was part of the Global Studies Academy at Clements High School. At the time, CHS was also one of the best high school swim teams in the state, so of course I joined. By my junior year of high school, I unwillingly moved to Travis High School. Then things began to look up, as I then joined their swim team as well as qualified for regionals. By my senior year I was one of the team captains and qualified for regionals again.

I have thought about swimming in college, but for now I am swimming with Masters Swim at Life Time and I love it!

I have been inspired by my coaches and all the friends that I have made in the swimming community to begin coaching. I want to have the bonds with my kids that I had with my many coaches. I first started working with Life Time Fitness in April 2015 as a swim instructor, and by the end of the year I was head coaching. I have only been coaching USA Swimming for a little less than 2 years. I strive to be the best role model/coach. By helping better my swimmers as athletes, as well as trying to have a genuine relationship with each of them and support bonds with their friends and coaches that can and will last a lifetime.

Coach Rosentreter has 12 years of coaching experience at multiple levels. She started swimming at the age of 7 in Michigan and competed for Okemos High School both in swimming and water polo for 4 years. She is a multiple All-American Athlete and achieved 2nd at the State Championship in the 100 Breaststroke. After high school, she continued with her love for swimming as a part of the University of Michigan Varsity Swim Team where she competed at the Big Ten Championships. While in college she also competed on the University of Michigan Varsity Water Polo team, which received runner-up in the national championship.

She began coaching as an Assistant Swim Coach, as well as the Head Water Polo Coach, for Holt High School, in her hometown. The following year she became the Head Swim Coach for Williamston High School in Michigan.

After moving to Texas, she spent 2 years coaching for First Colony Swim Team in Beaumont. Relocating to Houston, she continued as a Lead Coach for the local club swim teams for 3, while also performing as the Head Swim Coach for Summer Creek High School.

Coach Rosentreter’s goal is to create an environment where success is inevitable. An environment where the athlete can experience the physical training, the psychological preparation and emotional preparation to allow each athlete to not only grow as a strong swimmer, but grow as a person. With a love and passion for the sport, Coach Rosentreter hopes to share her knowledge of swimming and help her swimmers excel as students and athletes.

Coach Amy was born and raised in Houston, Texas. She has been around the sport since she was 4 when she started swimming for her Dad's Summer team. He was also a Head Coach (swimming, diving & waterpolo) for 30+ years at Westfield and Humble High Schools. She developed a passion for the water and the sport and swam competitively for 14 years.
She began her coaching career as a Summer league Coach 4 years ago with the last 3 years being the head coach. She also has experience in coaching swim camps, stroke clinics and swim lessons. She enjoys working with children in the water to get them comfortable, confident and help them find their passion.
She graduated from the University of Houston with a bachelor degree in Exercise Science and a minor in health.
She is married with 3 kids, ages 11, 7 & 1. Her two oldest are also a part of Life Time year round team!