Coach Joe joined Aulea in May 2014. Prior to that he worked as an assistant at Punahou beginning in 2004 and took over as head coach in 2008. Coach Joe is an American Swimming Coaches Assocation (ASCA) level 4 swim coach, which is in the top 10% of all coaches in the nation, and was named ASCA's Hawaiian Swimming Age Group Coach of the year in 2011. In 2016, his second season with Aulea, Joe was one of 100 coaches nationwide named as Nationl Junior Team Coach. He has coached swimmers to all levels including junior and senior nationals and has had many swimmers reach national top 10 rankings.  He has coached swimmers to over 30 new Hawaiian swimming records as well.  During his short time with Aulea he has already helped the team to accomplish the following:

-Qualified mulitiple swimmers for the USA Swimming Senior National and Junior National competitions.  One swimmer had a runner up finish at Junior Nationals and qualified for USA swimming's national junior team.

-Had a swimmer who broke 5 Hawaiian Open division men's records

During his time at Punahou, Joe also worked as a social studies teacher at Farrington High School and was also the head swim coach at Farrington High School from 2006-2013.  He revived a program that had been dormant from 1997-2005 to a top-10 finish in the OIA and it’s first state qualifying individual swimmers and relay swimmers in over 40 years.

Joe grew up in Santa Rosa, Ca and swam club from the ages of 6-18 with the Santa Rosa Neptunes qualifying for and competing at the Junior National level.  After high School, Joe went to Denison University in Ohio where he studied economics and was a four year member of the varsity swim team which twice finished as runner-ups at the Division III swimming and diving national championships.  Joe won multiple All-American honors during his tenure and served as team captain during his senior year.  Immediately after college Joe returned to the bay area and worked in the mortgage finance industry helping mortgage banks with interest rate risk management.  Shorty after moving to Hawaii, Joe received his teaching license in secondary social studies. During his time at Farrington High School, Joe was named an Ola Pono award winner in 2008 (one of ten winners statewide) for his work in promoting safe, healthy and drug-free lifestyles.  In addition, he was featured in a front page article in the Star-Advertiser in 2012 for his work in reviving the Farrington High School swim program.  After taking the Aulea job, Joe decided to make a full plunge in to windward aquatics and as of 2014 he serves as the head Coach of the Le Jardin Academy Bulldogs.

Joe and his wife Melissa live in Kaneohe.  They have a six year old daughter named Maya and a 9 month old son named Aidan.  In addition to serving as head coach of Aulea, Joe is currently working as the Executive Director of the Hawaii Aquatics Foundation, a non-profit who's mission it is to have all 2nd grade students on the Hawaiian Islands learn drowning prevention skills.  He also serves as the Age Group Chair for the Hawaiian Swimming LSC.  In his spare time, Joe can be found doing open water swims, surfing, hiking, biking and enjoying time with his family.

Coach Yan  joined Aulea in September of 2017 and she will be serving as our Gold group coach.  Coach Yan is a retired Chinese National team swimmer. She won a Gold medal at 4×200m freestyle at 1997 FINA Short Course World Championships. Later that year at Chinese National Games, she broke world record at 400m individual medley. [1]  She then won 400m individual medley and 400m freestyle at 1998 Perth World Aquatics Championships. She participated in 1996 and 2000 two Olympic Games.

She started college in China and transferred to UH Manoa in 2002 as a sophomore. She earned her BS in 3 years, and swam on an Full Scholarship.  After her undergrad, she completed a master's degree at UH and has been working in recreation management with the Sheraton hotel ever since. She was both the head age group coach and head coach for Punahou Aquatics in Honolulu, HI from 2008-2016.  Her time at Punahou was extremely productive.  She coached swimmers to over 50 state age group records and coached state, regional and zone champions as well as multiple national top 10 swimmers.

Coach Yan believes in a very technical approach with fundamental skills such as kicking and streamline at the core of her belief.  She is very goal driven and teaches her swimmers to be that way as well.  She shares not only swimming expertise with her swimmers but also her own life experiences both in and out of the pool.  We are very fortunate to have coach Yan leading the gold group.  When she isn't coaching or working at the hotel, she enjoys swimming herself and loves surfing!

Coach Rob joins us with a rich history of coaching competitive swimming. Prior to his arrival at Aulea, he and fellow colleague Ryan Jones started up the Rocklin Mavericks (RMAV) in Northern California from 2015-2017. During his tenure, he turned a Senior program around by producing 5 Sectional Qualifiers, 2 Future Qualifiers and graduated multiple athletes who went on to swim in DI and DII programs in college. On the age group side, the club finished in the top 10 at the Sierra Nevada LC and SC JO’s, top 50 at Far Westerns and produce two top 16  nationally ranked swimmers in the country. In 2013-2015, Rob was the Assistant Head Coach for the Sierra Marlins where he coached all levels of Senior swimmers - BB+, junior, senior nationals and Olympic Trial Qualifiers - he also served as the Interim Head Coach during the clubs transition in 2014. From 2008-2013, Rob was the Senior II lead coach at Santa Clara Swim Club. The club was in a major transition when he took over with only 15 senior swimmers in his group  with an average attendance below 50%, at the end of his tenure the senior group grew to nearly 75 swimmers, attendance hovered around 80%. He also put numerous swimmers on Far Westerns and Zone teams and promoted many of his athletes into the JR National Group. Rob took a fledgling program at SCSC and molded it into one of the top 10 Senior programs in the country. In 2006-2008 Rob was the Head Age Group Coach of LAMVAC (Los Altos Mountain View Aquatics Club). He revived the age group program by producing multiple Junior Olympic and Far Western Swimmers; the most that club had ever seen years.

Rob grew up swimming at the YMCA in American Samoa, he later moved to Hawaii, graduated from Aiea High School and swam under Bill Sakovich (Hawaii Hall of Fame Swim Coach). After High School he swam at Foothill College in California and was a finalist in the 100yd and 200yd breaststroke at the JUCO Coast Conference Championships. He then transferred to San Jose State University majoring in Psychology. Rob and his fiance Tiffany live in Kaneohe, he is an avid surfer and loves catching the swell in his free time. 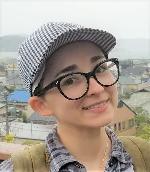 Coach Kirstin joined Aulea in the beginning of 2020. Prior to that she has worked for Hawaii Aquatics Academy as a Swim Instructor, teaching elementary school-aged children as part of a Water Safety Initiative.

Kirstin was born in Virginia, though moved to Hawaii at the age of five and has been living here for over 15 years. After graduating Kailua High School, she moved to Colorado for a brief period of three years, and decided to move to Virginia to marry her husband in 2017. She returned ready to tackle new challenges, and is always eager to learn new skills.