Emily's swimming career began at the age of 5 with the Riverfront YMCA. By the age of 8 she had moved on to USA Swimming where she made her first of several All-Stars meets as well as qualifying for Zones. Over her USA career she had several high point awards at State Championships. As a member of the swim team at Dowling Catholic she qualified for State all 4 years, was the school record holder in the 100 Backstroke and swam Backstroke on a State Champion Medley Relay. Emily has coached for 2 different teams before joining the Blaze in 2015.

Emily is currently enrolled at Iowa State University where she is working to complete her degree in Education and earn her teaching license. She loves being a part of the Blaze family and helping pass along her love of swimming and competition! 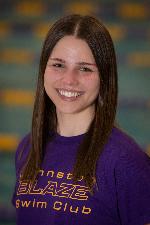 Ellen began swimming at the age of 8 for her local YMCA in Newton. She soon realized she loved the sport and wanted to get more competitive, so at the age of 11 she started swimming with USA swim club Central Iowa Aquatics. There she qualified for several big meets including All-Stars and Zones. Ellen swam for NCMP in high school at Newton Senior High School where she set several school records and qualified for the high school state meet all four years. Her favorite events were the 200 IM and 500 freestyle.

Ellen ended her swimming career after high school and attended Iowa State University for public relations. She is happy to be back in the swimming world as a coach for Blaze and looks forward to seeing the kids improve! 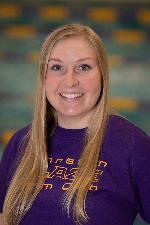 Savannah's swimming career began at the age of 5. She has participated at the YMCA as well as in USA Swimming. Her high school years included being a part of 2 State Championships in Softball as well as qualifying for State in Swimming as a Junior and Senior. She has taught swimming lessons for over 4 years and was an assistant swimming coach at Glen Oaks Country Club for 2 years before joining the Johnston Blaze.

Savannah is currently finishing up her degree in Chemical Engineering at Iowa State University where she is a member of a soriety and involved in several on-campus organizations. Savannah loves being a part of the Blaze and watching how much the kids improve each season!

Chelsea started her competitive swimming career at the age of 10 for the Keokuk YMCA Swim Team. In high school, Chelsea was a four-year varsity letter holder for Keokuk High School and was a state participant her sophomore year for the 4x100 Free Relay. Throughout Chelsea’s high school swimming career, her favorite races were 50 free, 100 free, various relays, and the 200 IM. Chelsea was a year-round athlete participating in track and field with four Drake Relays and four State Meet appearances with a 7th and 5th place finish in long jump her junior and senior year; as well as softball where she made three state appearances as starting left fielder and her team placed 4th, 2nd, and 5th her sophomore, junior, and senior years of high school. Once Chelsea had graduated from high school and went to the University of Northern Iowa, she continued to swim in college recreationally and participated in intramural swim meets for fun! During winter and spring breaks throughout college, Chelsea would come back to Keokuk and volunteer coach for the YMCA swim program.

After graduating from UNI in May 2016 with a secondary education degree, Chelsea taught and coached for Columbus Community School District for two years before she moved to the Des Moines area in 2018. Chelsea is really excited to coach the Blaze team, share her skills of swimming, and to learn new tips and tricks from the other coaches!