Originally from Scotland, Donald has been involved in coaching for over 22 years. As a fellow of the Institute of British Swimming, Donald completed several high level coaching certifications at University of Edinburgh’s Morey House School of Education, under the watchful eye and strict guidance of British Hall of Fame & Olympic Swim Coaches Hamilton Smith and Neville Cross.  Donald's coaching background includes coaching club athletes, working with grassroots swimmers, and developing regional super teams.

Over the years Donald has coached multiple national and international athletes, countless state and regional champions, and many state and regional record holders, including swimmers ranked nationally in the Top 10.  Donald coached and directed two national education programs in the United Kingdom specifically targeting the country's most promising swimmers and advancing the skills of the coaches involved with those swimmers.  Donald currently serves on the YMCA of the USA national advisory council for competitive swimming and manages the North Central states of IA, MN, NE, ND, SD.

Donald is a USA and YMCA Level 3 certified coach.  He is now in his 13th season with the team.  As a father to 2 young Y swimmers he is eager to continue to advance the quality and success of MACR Sharks swimming.

Mike is a father of 3 girls and married to Tricia Jones.  Mike's past swimming experience includes two years of being the head coach of the Mount Vernon Swim Team.  Mike is a level 1 USA certified coach and is now in his second year of coaching with the MACR Sharks.  In addition to swimming Mike coaches numerous sports at Mount Vernon including football, basketball and softball.  He enjoys watching the team get stronger every year.

Favorite saying: You get out of practice what you put into it.

Laurel started coaching with the Sharks last summer and continued with the team into the fall.  Laurel is also the Assistant Varsity Women's Swim Coach at Washington High School.  Laurel has always loved water and being in a pool, lake, or the ocean!  As a competitive swimmer from age 8 she competed for a summer league and then swam for Mason City High School where she swam at all four state swim meets as a sprinter (50 free, 100 free, relays).  Laurel also ran track in high school and was on the Crew team (2 years) at the University of Iowa.  Laurel loves all sports and enjoys being outdoors and active with her family.  This summer season Laurel hopes your swimmer will enjoy being in the water, working hard, and is able to develop their strokes even better!  A few fun facts about Laurel...She has lived in Cedar Rapids for 9 years, was a Peace Corps Volunteer in Senegal, West Africa, and has five kids (3 stepdaughters, a stepson, and a daughter)! 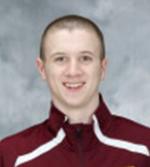 Calvin started his swimming career as a member of the MACR Sharks before moving on to club swimming and then eventually to college swimming.  As a member of the University of Minnesota team, Calvin excelled in backstroke events.  He also holds the 200 IM record for Linn Mar High School making Calvin a great all-rounder.  Calvin has been on the coaching staff of LMST for 1.5 years and is excited to be coaching with MACR.  Calvin hopes that swimmers will learn that swimming is about more than just technique and racing, that it’s about finding new ways to improve both in and out of the pool, mentally and physically.  Fun Fact about Calvin – he is completely deaf in his right ear.  Make sure you approach from the right (unless you want to sneak up on him!) 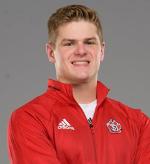 Now where does that name sound familiar you might say?  As a member of the MACR Sharks Jared’s name can be found plastered across the team record board in almost every event.  Jared began his swimming career late in life (at around 12) and quickly rose to the top through hard work and dedication.  Jared represented MACR at the YMCA National Championships, won gold at state in the 100 FLY for Washington High School and has swam for the University of South Dakota for the past 4 years.  As a member of the Sharks Coaching team Jared hopes that every swimmer will work to improve their swimming technique and have fun while doing it!  Fun Fact about Jared – he really enjoys playing video games!