Coach Darby has been with the Buehler Blue Marlins since 1997. She took over as the Head Coach Summer of 2005. She is ASCA Level Three certified and Level Four Educated.  Coach Darby graduated from Hoffman Estates High School where she swam and ran track. She then moved on to Harper College for one year where she continued to swim and qualified to Nationals, she also ran track.  Coach Darby then attended Eureka College where she graduated with B.S in Physical Science (chemistry & physics) with secondary education endorsement. She continued to swim and qualify for Nationals. She even placed in the top 8 in the country achieving All-American Status. Her senior year she was named captain of the swim team. Coach Darby also was on the pom pon squad, wrote for the school newspaper, was president of her dorm, named to the dean’s list, a member of sigma zeta (math and science honor fraternity), and graduated with honors.  After college, Coach Darby returned to Hoffman Estates High school where she taught chemistry and physical science and also coached the girls’ swim team. After Hoffman, she moved on to Hersey High school where she coached the pom pon squad. After teaching for a few years, Coach Darby moved to the private sector and became a chemist. After 8 years of being a chemist, she retired when she got married to Dave Brtva.  Coach Darby & Dave welcomed Alexander John Brtva into the world on September 9th, 2008. Then on March 27th, 2012 The Brtva's welcomed William Franklin Brtva.

My favorite swimmer past or present is….. This is hard, I have had the chance to meet so many swimmers Pablo Morales, Anita Nall, Diana Munz, Gary Hall Jr., Rowdy Gaines. They were all so down to earth and nice.  I think Janet Evans, Amy Van Dyken, and  Jenny Thompson influenced me during high school and college.  Now that I am older, I am impressed by Dara Torres.  I think there are many great swimmers out there, but the ones thath really stand out are the ones that are great role models. They are someone I would want my team to look up to. They make good choices in and out of the water.

My favorite movie…. Do I have to pick one??? I am a huge Disney Fan. I really like Finding Nemo, Meet the Robinsons, Chicken Little, But Snow White is my Favorite! But on the flipside... I love horror movies!!! I like being scared. I love musicals and I will never miss a chance to watch Gone With the Wind.

My favorite past time….  If I am not in the water swimming myself, I am surfing the web, playing a computer games, or spending time playing with Zander & Will.

Quote…   Good, Better, Best. Never let it rest. Till the good is better, and the Better is Best!

My favorite book…. I really don’t have a lot of  time to read, but when I do… it is normal Dean Koontz… it is supernatural scary type of stuff. 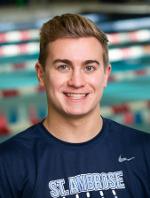 Garret Sims is a Junior on the Men's Swimming and Diving team at Saint Ambrose University in Davenport, Iowa, where he is double majoring in sports management and marketing. He started swimming competitively on the Kishwaukee YMCA Swim Team in Dekalb when he was 6 years old and has competed at the state and Central Zone levels throughout his career.
Garret has been a certified lifeguard for over five years and taught private swim lessons for children ages 3 and up for the past two summers, including those with physical and cognitive disabilities.
Fun facts about Garret:

My favorite swimmer past or present is: Tyler Clary

My favorite movie: Star Wars: Revenge of the Sith

My favorite past time: I like to listen to different styles of music

My favorite sport other than swimming: Football