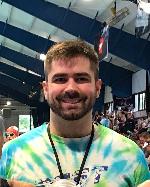 Alec has been competitively swimming since the age 4 for the Dundee Dolphins.  He has also swam for the Jacobs-Dundee Crown co-op, participated in the Loras College swim program, and began swimming for the Cyclones in the summer of 2011. He devotes almost as much time to swimming as he does to academics and is currently enrolled as a full time student at ECC. He is currently in the process of expanding his athletic horizons beyond the pool and beginning to dabble in triathlons with his ultimate goal of completing the Iron Man in 2015. Alec is currently living with his family in the Dundee area. 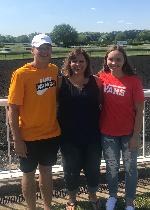 Stacy has been in the swimming world for a long time.  She started swimming on her park district swim team at the age of 8.  She also swam all 4 years at Hoffman High School and then swam 2 years at Harper College.  She has worked in aquatics since she was 18 from being a lifeguard, to teaching swim lessons, and then to managing outdoor facilities.

Stacy has a Master's Degree in Reading in Education and is a 2nd Grade teacher in Huntley.  She lives there with her 2 kids, Dillon and Jillian.  Both of her kids swim on the Elgin Cyclones.  She loves to cheer them on along with all of the other swimmers.

Coach Janet started swimming at age 9 on the Glen Ellyn Park District team.  As an adult, she's been recruited from lap swimming by fellow swimmers and coaches, and has enjoyed swimming competitively on a series of teams.  She's currently swimming with Elgin Blue Wave Masters.  She's been teaching all levels and ages of swimmers for over 20 years.  She started coaching age group swimmers in 2009.

She graduated from NIU as a BA in English with a minor in Philosophy, and received paralegal certification from Roosevelt University.  She has been on the executive boards of two paddling organizations, where she put her efforts into youth development and adaptive athlete training. In her spare time she teaches paddling as a USCA instructor, and competes in marathon disciplines for kayak and canoe. 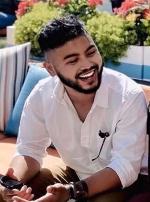 Coach Kris (or Coach K) was a competitive swimmer in high school ever since the age of 10 years old. He swam breaststroke almost his whole career! His main events were the 100 breast, 200 I.M., the breaststroke leg of the 200/400 medley relay, and the 400 freestyle relay. He enjoys instructing and coaching swimming and finds it fulfilling to see significant progress in all of his swimmers!

Coach K lived in Chicago for 4 years and attended school at DePaul University as an Information Systems Major. Although he has a knack for business and management, his true passion lies in music! He excels in playing instruments such as the guitar and piano and find thrill in performing for events like weddings! You might even catch him tapping his feet to his tunes during practice. (-: