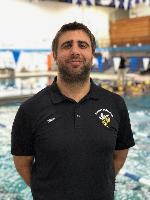 Andy Sheely is a life-long swimmer whose passion for swimming is unmatched and  very much enjoys every moment he spends on the deck. Going into his 7th year as the Head Coach, Andy is thrilled with his time with the club, and his coaching career thus far has watched him work passionately with swimmers to achieve tremendous success, such as Regional Championships, State Championships, and even Age Group National Championships. Well Over 100 swimmers have qualified for Illinois State meets in the short time that Andy has been the Head Coach.  Andy looks forward to developing a very strong technique-based program for all ages, as well as increasing the competitiveness across all levels.

As a young swimmer, Andy put together a very successful career in the pool - as a leader in Age Group Swimming, High School Swimming, as well as a NCAA Athlete collegiate swimmer at Western Illinois University. Andy swam competitively for 13 years with teams such as the Schaumburg Barracudas and the Elk Grove Swim Team. Some of his accomplishments include being a Junior Olympic Champion in the 1500 Meter Freestyle as a 14 year old, along with many other top 3 finishes at JOs (now the Age Group State meet).  He was also his High School team captain for 2 years while qualifying multiple times for the IHSA state meet in both individual and relay events.

In his free time, Andy enjoys spending time with his family consisting of his wife Erin, his son Logan, and his daughter Emma.  Andy also is always researching new fun and effective ways to improve training and team morale. When he's not at the pool, Andy works as a Course Development Project Manager with Perdoceo Education Corporation managing IT and Gen Ed programs for multiple Universities. 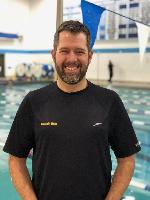 Eric Thuneman is a veteran Level 3 ASCA coach who has a passion for swimming that dates back to his first introduction to swimming at 6 months of age.  He has never looked back!  He has a strong history of success with over 18 years of coaching experience and 20+ years of competitive swimming experience!

Coach Eric has worked with all levels of swimmers from the learn to swim all the way to the Olympic trials qualifier in addition he has produced both Illinois swimming and National Top 10 swimmers. He still competes in swimming during triathlons as well as numerous other endurance events over the years!  Coach Eric has held many different roles during his coaching tenure.  He was the Head Swim Coach of the Kroehler YMCA Swim Team in Naperville from 98'-06', Hinsdale Swim Club as the Assistant Senior/Dry-Land coach from 09'-11', Head Coach for the Farmstead Flying Fish a park district team in Naperville from 04-06.  The Hornets have seen some of their most successful seasons since Coach Eric has joined the team!

He believes that the fundamentals of stellar technique, hard work and a positive mental attitude are what swimmers need to succeed over the course of a swimming career.  During the day he is a K-2 Physical Education Teacher! 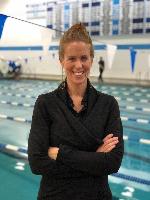 Coach Nelly has been involved in the sport of swimming for most of her life, beginning training year-round at the age of 6 with Westmont Swim Club. Throughout her 11 years training under Dave Krotiak, she achieved two individual state championship titles, many relay state championship titles, as well as maintaining a top 10 ranking in Illinois Swimming and Central Zones. While at Hinsdale Central High School she competed on 4 State Teams (3 State Championship Teams), 6 State Championship Relays, was a 6 time IHSA All-American, and was a proud Team Captain.

Coach Nelly went on to swim at NIU, finishing in the top 10 both her freshman & sophomore year in the MAC Championship. She hung up her suit her junior year after transferring to DePaul University, where she graduated with her BA in Elementary Education and a minor in psychology. Post graduation, she taught kindergarten at the Catherine Cook School in Chicago, then spent 7 years in Children&apos;s Ministries at Christ Church in Oak Brook, and currently teaches Kindergarten at Avery Coonley School right here in Downers Grove.

Coach Nelly strives to give her athletes the swimming family she had growing up, a “home away from home”. Her 18 year coaching experience includes 7 years with Butterfield Country Club and 7 years at Lyons Aquatics. She is beyond thrilled to have found her swim home at Hornets Swim Club!

Coach Nelly lives in Downers Grove with her three awesome children and their furry beasts. 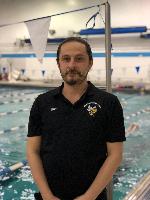 Vlatko Angelov comes from Macedonia, where he attended the University of Kiril and Metodija with a Bachelor's degree in Physical Education. He has been working in aquatics for the past 12 years, teaching and coaching swimming to kids and adults. He coached the Rich Port YMCA kids swim team and currently is coaching the masters swim team at the Indian Boundary YMCA, where he also serves as the Assistant Aquatics Director. In addition to holding numerous Aquatics Safety and Supervision certifications, Vlatko also trains staff in YMCA and Red Cross lifeguarding. For the past six years, he has organized two swim meets a year to benefit the YMCA Kids Need Heroes Campaign. In his spare time, Vlatko enjoys soccer, swimming, and playing Legos with his wife and two kids. Vlatko is very excited to join the Hornets and is looking forward to a fun and successful season. 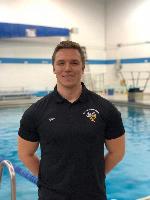 Sebastian has been a Hornet swimmer since he was 12 years old and swimming has been a big part of his life. He swam at Hinsdale South high school competing and placing at the state level. From there he continued his swimming career at UIC where he was the captain of his team and achieved some record swims. All the meanwhile he finished his bachelors degree in May 2015 in mathematics with a minor in biology. Sebastian loves the racing aspect of swiming and is very excited to work with the kids to better their techniques and get faster in their events!

I grew up in Elmhurst Illinois where I swam for Elmhurst Swim Team and went onto swim and play water polo for York High School. I than attending Carthage College where I majored in PE and Health. I swam all four competitively for Carthage where I was a top 8 in conference scorer all four years in various distance freestyle events. While attending Carthage I also assisted in coaching the Kenosha Barracuda's now known as PX3 for three years. After graduation I began working at West Chicago High School as the Men's Swim Coach and a PE/Health Teacher. I continue to work at WEGO and coach the Boys Swim Team including individuals who have made state and JNAT appearances. I am a registered member of US Masters Swimming and will compete when the time allows.

Katie Hurckes started swimming competitively at age 6 and continued to do so for the next 13 years. She swam for the Duneland Swim Club and Chesterton High School girls swim team where she was a member of All-American relays and school records. Katie also lifeguarded and taught swim lessons throughout high school and college. Earlier this year she made her made her way back into the pool by coaching the Butterfield Park District Swim Team. Katie has been a parent within the Hornet's team for over a year, but is excited to join the coaching staff now that both of her children will be on the team!

Katie is an elementary school teacher in Downers Grove School District 58 and currently serves as a math interventionist at Kingsley and El Sierra Schools. She has degrees in Elementary Education and Higher Education Administration from Ball State University in Indiana, a degree in math education from Mt. Holyoke College in Massachusetts and is currently working on her Administrative degree from the University of St. Francis here in Illinois. In her spare time, she enjoys working out at Orange Theory Fitness and doing escape rooms with her husband!

Nick Pecoraro has been swimming competitively since he was 11 years old, and continues to surround himself with the sport. He began swimming club in middle school with other sports like track and volleyball before committing to full-time swimming in high school. While his alma mater, Nazareth Academy, didn't have a swim team, he swam at Lyons Aquatics, where he developed his strong breaststroke/IM skills. He swam two seasons at Calvin University, focusing on the 200/400 IM and 100/200 BR. During that time, he began his coaching career aiding three seasons with the Calvin swim league before picking up a small USA Swimming coaching gig in East Grand Rapids for another summer. After graduating with his B.A. in Kinesiology - Exercise Science Emphasis last year (amid the pandemic), he made his return to coaching with Hornets. Nick is also a contributor with SwimSwam News, covering all swim meets from the club level to the national/international level. 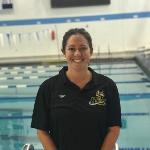 Elizabeth Jagow is a life long swimmer with a passion for helping others succeed. She began swimming in her grandmother’s backyard pool. In grade school she joined a competitive team and fell in love with the sport. Memories of swimming and meets are some of her fondest from childhood. Without a high school team on which to compete, Coach Liz retained the aquatic life by teaching and lifeguarding.  In college, she discovered a love of helping others succeed, especially kids. It was this passion that led her to return to teaching swim lessons. She’s worked with all levels of swimmer and all ages, from infants to adults, including her own dad.

Coach Liz especially loves seeing the Hornet Swimmers build friendships and create memories. She believes in life long learning and  the concept that the journey is just as important as the destination.