Former Head Lincoln-Way East Water Polo coach, turning a program with a losing record to it's first appearance in the State Quarterfinals

Coach Julie is originally from southern California. Started coaching club in 1993 with the South Pasadena Sea Tigers. Since then, she has coaches high school, college, masters and now the NAC Sharks! Her coaching philopshy is everyone counts and she loves helping swimmers set goals and improve technique. She has lived in Illinois since 2005 with her husband and three daughters! 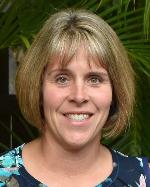 Susie is a Physical Education teacher at Lyons Township High School where she swam and played water polo "back in the day!" After briefly swimming at Ball State, she began coaching instead of competing. She has coached at Lyons Swim Club and Prestwick CC. Susie spent 10 years as the Frosh-Soph Swim coach at LT and 11 years as the Girls Varsity Water Polo coach at Lyons before she had her own kids. Her daughters, Teagan and Logan have swam for the Sharks for four years now.