Coach Amie has been the Head Coach of the Dundee Dolphins since 2013.

Coach Amie has a B.A. in Psychology and received her M.S. in School Counseling from Eastern Illinois University in 2009. In addition to coaching, she works at Oakton Community College as a Dual Credit Specialist and enjoys her role in Academic Affairs.

Coach Amie's coaching philosophy in her own words is, “I believe involvement in sports fosters success later in life as athletes learn the importance of hard work, teamwork, and sportsmanship. Swimming is more than just a competitive sport. It teaches self-discipline, encourages healthy habits, can enhance a child’s self-esteem and shows the athlete what they are capable of both in the water and in life. I think it is extremely important to engage all swimmers and promote a positive environment so the athlete enjoys the spirit of competition and growth." 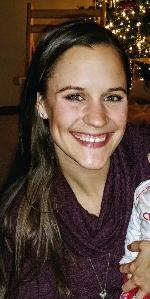 Coach Deidre started coaching with the Dundee Dolphins in 2018.

Her swimming career started when she was 9 years old with the Freeport Aquatic Swim Team (F.A.S.T.). At her team tryout they recommended that she get swimming lessons before trying again the following season but ended up letting her join reluctantly. Within her 1st year, she qualified for the age group state championship meet and went on to win a few age group state championships to top it off. So anyone looking to join our team for the 1st time, please keep that in mind! And to our veteran swimmers as well, the sky is the limit!!

Coach Deidre went on to compete for Freeport High School where she also won an Illinois High School State Championship and was awarded All American 9 times. She finished out her swimming career with the University of Minnesota where she also majored in Elementary Education.

Coach Deidre now has two young daughters that you might see around deck occasionally as well! 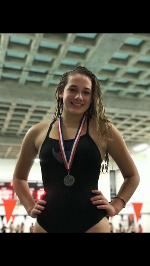 Kayleigh started swimming with Trails when she was 12 and continued until she was 18. She swam with the DeKalb County Swim Team for four years, starting at age 11, and for DeKalb High School varsity team for four years where she was voted Captain for two of those years. Kayleigh has multiple state medals.

Kayleigh previously worked as lifeguard and swim instructor for Lifetime Fitness, teaching lessons to swimmers of all ages. She was also Head Coach of a Lifetime Swim Team. Kayleigh has been a big supporter of her younger sisters, helping them to hone their technique, especially in freestyle and starts/turns and is passionate about swimming. Kayleigh stays active at the gym and is a certified personal trainer and group fitness instructor.

She is currently working on a certification in Sports Nutrition and loves staying active outdoors! 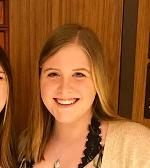 Faith Kenaga started coaching for the Dolphins in the Fall of 2016 as a senior at Dundee Crown High School. Having grown up on the dolphins and having swam competitively for Dundee Crown High School, Faith brought years of coaching techniques she learned as a swimmer while also building on her experience as a swim lesson instructor and as a coach for the Jr. Dolphins Swim Team. She is currently studying Nursing at Carroll University and we enjoy the positive energy she brings back on holiday and summer breaks. 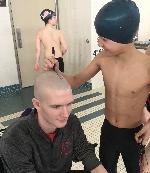 Reid has been coaching with the Dolphins since 2017, inititally starting out as a dry land coach for the 13+ age group. With his extensive swim background, he quickly adjusted to a full coaching role for the following season and brings a great energy to the team. Reid is currently attending Maryvale University and will be back coaching on holiday and summer breaks. 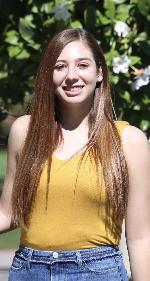 Pat Tucker has been around pools for most of her life. She grew up with a pool in her backyard, joined the Coho Swim Team (Deerfield, IL) as a child, swam on her high school team, and continued swimming for all four years at Augustana College, where she was a two-year National Qualifier. It is also at Augustana where she met her husband through the hazy fog of chlorine while he was the Assistant Men’s coach.

Through the years, Pat has taught swimming lessons, lifeguarded, coached a high school team, and still enjoys swimming laps in the morning before heading to her full time job as Human Resources Manager at International Teams in Elgin where she does her part in bringing people together to help the oppressed. Pat has worked at this organization for over twenty years, and loves the meaningful work she does there.

All three of her adult children swam competitively at some point in their lives as well, so she brings experience as a swimmer, coach, instructor, and parent to the team. She has been a fantastic addition to our team as she shares her love of aquatics with your children.