Chris Wolford comes to New Trier Aquatics after 2 years as Head Coach at Carolina Aquatics and 3 years with South Carolina Swimming as Sports Performance Director.  In his time with South Carolina Swimming, Wolford advised clubs on training and administrative issues, designed and ran the state’s select camps for its top swimmers and consulted with the LSC on policies and programs to improve competitiveness.

Laszlo comes to New Trier Aquatics with a wide range of coaching experience throughout all ages and skill levels. The Hungarian native built a well-known reputation of developing players and programs both domestically and internationally. He coached on four different continents and his players continuously compete and won in the NCAA, University Games, World Championships and some even made Olympic teams for various Nations.

Currently, he is a FINA lecturer, conducting coaches’ clinics around the world in his free time. In addition, recently he worked with the International Olympic Committee’s Solidarity program to reestablish a sustainable water polo program in Barbados and this fall in Ghana.

In Illinois, he worked tirelessly with numerous programs and athletes to try to grow and elevate the prestige of Illinois Water Polo. He has worked with several high school and club programs and helped many athletes to get to the collegiate level. He even started an “elite” water polo training session where he invites the top players from around the State for some high-performance training.

“I am very excited to get this opportunity with New Trier Aquatics. The club’s vision for water polo is unparalleled in the State of Illinois or even in the Nation, and I’m so honored to lead it. As a director of Water Polo, I can promise you that I will work tirelessly to help every single athlete to reach their full potential, not just as an athlete, but as a successful member of our community.”

Kristen started her career with NTA in 2016 as a yoga teacher with the Senior High Performance training group. Over the next 2 years, Kristen worked with the team to expand the benefits of yoga to several other training groups throughout the program. In 2019, she took on a full-time role as the team's Business Manager to keep the dry side of the program running smoothly.

Away from NTA, Kristen's coaching experience originates from a frozen water sport: figure skating. She has been a registered USFS (United States Figure Skating) coach for over 20 years with a focus on singles/moves in the field, synchronized skating and Theatre on Ice. She has worked to develop skaters of all ages, abilities to achieve their recreational, test or competitive goals. She believes that a solid foundation of basics no matter the sport leads to advancement and precision in athlete growth.

Throughout his career he has proudly guided swimmers to multiple Club Team Records, ISI Regional, ISI State, Central Zone, Speedo Sectional, NCSA National, USA Junior National, USA Senior National, and Olympic Trial Levels. Many of his former athletes have moved on to compete and excel at the collegiate level. Greg believes in a “Think, Swim, Fast, Win” philosophy. This philosophy lends the various aspects of commitment and hard work developed through the sport of competitive swimming to overall development of an individual. This belief provides the competitive athlete an experience that will extend well beyond the pool.

Greg prior to making his return to NTA was with the Patriot Aquatic Club and Stevenson High School from 2006-2015. Greg served as the Head Age Group coach from 2006-2011 and a Lead Senior Coach 2011-2015. He had helped coach the program to multiple ISI Age Group Top Ten Finishes and ISI Senior State Championships. He had crowned multiple ISI Regional and ISI Age Group State Champions. Greg also served as the Head Boys Swimming and Diving Coach at Stevenson High School and had lead the program 2008-2015. During his tenure the program flourished posting a 39-6 Dual Meet Record, 3 Lake County Championships, 6 North Suburban Conference Championships, 3 IHSA Sectional Championships, an IHSA Top Ten Finish, and multiple NISCA All Americans. In 2012 he was named by Pioneer Press Lake Shore Coach of the Year and in 2014 was named IHSA Sectional Coach of the Year. In the fall of 2019 Greg was inducted into the Evanston Township High School Hall of Fame along with the 2005 State Champion Boys Swimming and Diving program. Most Recently, he was named 2021 IHSA Sectional Coach of the Year.

Greg currently holds an ASCA Level IV coaching level,  is a current American Red Cross Lifeguard Instructor, and works with Illinois Swimming Inc. on their Safe Sport Committee. He graduated from the University of Illinois at Chicago in 2002 with a B.S. in Kinesiology. Greg currently resides in Norwood Park with his wife, 2 daughters, and his dog. 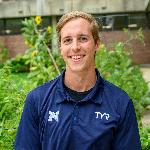 Brendan is our Lead Coach for both the Junior Performance and Advanced level groups. He swam for NTSC (2007-2016) under the direction of Bob Kizer, Kyle Bubolz, and Andrew Hodgson. He Graduated from Loyola Academy in 2012, where he was a multi sport athlete excelling in swimming and water polo. In 2011 and 2012, he was an All American on the all of the Relays for Loyola Academy. Brendan attended St. Louis University where he continuted to excell in pool as varisty member from 2012-2016. He was school record holder on all the SLU Relays as well as 200 Freestyle and 100 Butterfly.  Brendan earned his degree in B.S. Buisness Administration with a concentration in Sports Buisness.  After graduating from SLU Brendan served as the general manager for Cyclebar in Evanston. He also currently serves as an assistant coach for the boys water polo coach at Loyola Academy. Brendan currently resides in Lincoln Square and when he is not on the pool deck you may find him on a bicycle, as he is an avid rider. 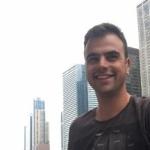 4th year with NTA
Bachelor’s in Informatics and Telecommunications

Coaching philosophy
“A team above all. Above all a team.” 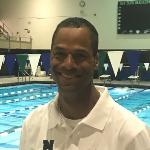 James Helm will be entering his second season and first full year at New Trier Aquatics. He restarted his coaching career working long course seasons with the Lincolnwood Lightning 8 years ago. He has spent the last 6 seasons with the Iguanas Swim Club (Chicago) where he was an extremely successful lead age group coach.

Coach James has proven track record of developing proper stroke technique had the unique opportunity to work with and successfully develop swimmers of multiple skill levels. He is extremely excited to bring his energy, passion and love of swimming to New Trier Aquatics. Helm has been privileged to work with multiple Club Team Record Holders, ISI Regional, ISI State, Central Zone and Speedo Sectional Levels qualifiers and Champions.

James is a native of the south side and attended Mount Carmel High School (Chicago) where he swam and played water polo all four years. Helm continued his swimming career at the University of Findlay (Ohio), excelling in short distance sprints. He was an individual record holder, National Qualifier and member of four school record setting All-American relays.

In his spare time when not coaching swimming, basketball or baseball, Coach James enjoys spending time with his family and walking his disobedient dog, Daisy. 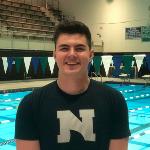 Chris is a former National qualifier and State Finalist as a Loyola Rambler, specializing in the freestyle events. As an athlete, Chris was also part of the Illinois Swimming LSC Board and was a passionate advocate for athlete rights. A scholarship athlete at Miami of Ohio, Chris has a passion for Astronomy and a penchant for random trivia and fun facts. He also currently trains with our Semi-Pro group as he continues a casual competitive career.

Rob is excited to begin his third year at NTA ! He previously  spent 2 years at Big Blue Aquatics . He began his swimming career at the age of 8 for Willow Knolls Country Club in Peoria, Illinois. Shortly after, he began swimming year round for Brian Points of Docs Swimming and continued every year in high school. After high school, he found his passion for teaching swim lessons while at the University of Iowa. While teaching swim lessons, he worked individually with swimmers to improve their skills and successfully achieve goals of swimming competitively.  In addition, he has previously worked with adults with special needs and specialized in developing adapted swim programs for non verbal adults and children with autism.

Rob believes swimming is an inclusive sport that teaches lifelong motivational skills and patience. As a coach his philosophy is to highlight the unique traits of each athlete, have patience in their development of proper swim technique, and build a fun and safe enviroment. He also believes strong communication between parents, athletes and coaches is key to success ( a trait taught in one of the many lessons from his mom, a lifelong teacher). His humor and unique approach to the development of the athlethes  can be seen in many of his workouts.

Rob resides in Northbrook. In his sprare time he can be found bass fishing and kayaking in one of the many surrounding Forest Preserves. 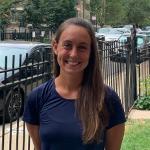 Lindsey grew up swimming at age 6 in Boulder, Colorado. She went on the study and compete at John Carroll Univeristy in Cleveland, Ohio. While at JCU, Lindsey won multiple conference events and was awarded the Clyde Lamb Award conference award for athletics and academics. She graduated with a degree in English and Exercise Science and five school records in her name. After graduation, she moved to Raleigh, North Carolina and quickly joined the TAC TITANS coaching staff. In her four years with the TITANS, Lindsey worked primarily with the age group program including both the elite 11-12 and 13-14 groups as well as the advanced 9-10 year olds. Lindsey's coaching philosophy centers on creating strong technical skills for all four strokes and actively creating swimmer engagement during practice. When not on deck, Lindsey enjoys staying active, working on her hand-lettering, and exploring new places with her husband. She is excited to be a part of New Trier! 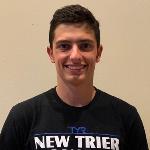 Brian has been an invaluable assistant coach with our program and we are excited to have him lead our Novice groups with Coach Kathryne. He was a state & sectional qualifier as a swimmer and a Varsity swimmer & polo player at Loyola. He is currently studying engineering at Northwestern & also enjoys caddying on the weekends at local golf courses!