Nick comes to Lakeside after spending 10 years at Dynamo Swim Club in Atlanta, Ga. At Dynamo Nick coached all levels of the program and served as the Head Age Group coach from 2015 - 2021. In his time at Dynamo Nick had the opportunity to share the pool deck with and learn from some of the top coaches in the country. Coach Nick has coached numerous Georgia State Champions, Georgia State Record Holders, Dynamo Top 10 Swims, Dynamo Team Record Holders, as well as USA Swimming Top 10 times, and USA Swimming All-Time top 100 times. He has coached athletes at all levels of the sport from learn to swim all the way up to Summer Juniors and Olympic Trials Qualifiers. Coach Nick also coached US Open and World Record holder and 2020 US Paralympic Gold Medalist, Gia Pergolini.

Prior to Coaching at Dynamo Nick spent a year coaching at the Maclay Northside Dolphins in Tallahassee, Florida.

Nick is originally from Lexington, KY and grew up swimming at Wildcat Aquatics for Coach John Brucato. 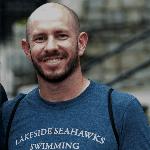 Richard Garza joined Lakeside in the fall of 2020.  He started swimming in South Florida at the age of 7 and swam for Florida Atlantic University.  His coaching career started in 2008 and discovered he had a knack for teaching.  He went on to represent the Florida Gold Coast at the Southern Zone Championships for many years, coached a ton 12&U swimmers to top 16 performances, and started his own Masters Team.
In 2014, he was a recipient of the Masters Swimming Kerry O’Brien Coaching Award.  In 2015 he was named the Head Coach for U.S. Masters Swimming at the Pan American Masters Championships in Medellin, Colombia.  In 2017 he was the Head Coach for USMS at the World Masters Championships in Budapest, Hungary.
After working as the Head Age Group and Head Masters Coach for several years, Richard relocated to Frisco, Texas to focus on Masters.  In less than three years, Richard turned a fledgling program into the 2019 U.S. Masters Swimming Club Of The Year.  That same year, he was also recognized as the USMS Coach Of The Year, and received the Dot Donnelly Service Award.
In his first year with us, Richard was named one of the top 50 Age Group Coaches in 2020 by the American Swimming Coaches Association.
He's excited to continue the tradition of excellence here at Lakeside and share his passion for elite competitive swimming,