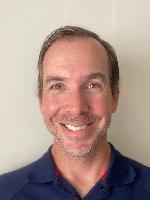 Coach Tom is the Head Coach for all groups and coaches the Senior Blue, Junior White, and Masters groups. He is also the primary Dry Land Coach. He started his swimming career during his high school years while growing up in Aurora, CO. He has been a Lifeguard and Water Safety Instructor since the age of 15. At 18 he joined the U.S. Coast Guard and was one of the rescue swimmers assigned to cutter Ironwood in Kodiak, AK. During his 20 years of service, he continued to coach and mentor junior members, providing instruction and knowledge required to pass the Aviation Rescue Swimmer program and annual physical fitness swim test. He received his Master's degree in Sport Administration from Upper Iowa University in 2020. He secured a U.S. Top 10 time for the 400 IM in 2010. He also competed in the FINA World Masters Championships in 2010 and 2014, earning several Top 25 finishes. He still competes today with Southern Masters and loves backstroke and butterfly sprints.

Sarah is the Aquatics Supervisor for Ochsner Fitness Center. She was most recently the Head Swim Coach and Health & PE  Department Chairperson at Cabrini High School. She has been a swim coach and instructor since 2010. She graduated with a degree in Human Performance & Exercise Science from the University of Alabama in 2015. She began her swimming career during her childhood years and continued through high school. She has been focusing her coaching and motivating efforts on athletes 12 years old and younger.

Laura began swimming competitively at age 8 with Metairie YMCA Aqua Jets for a majority of her career, finishing with Crescent City Swim Club as a Senior in high school.  She was a state champion and member of LA Zone team, before swimming at LSU for a brief time as a breaststroke specialist.  Laura started coaching for Elmwood Sharks in 2014, beginning with 10 & unders.  She enjoys coaching technique, racing, and relays, with an emphasis on sportsmanship.   Laura has a bachelor’s in Business Administration and is a certified occupational therapy assistant for a local rehabilitation company.

Brett has swum most of his life swimming competitively beginning at age 5 with the Hill Heights Hurricanes out in Destrehan. He went to high school at Jesuit High School and joined the team his sophomore year when he also began swimming year round. After Jesuit, he swam collegiately at Wheeling Jesuit University in Wheeling, WV., for three years until the program was cut his senior season. He is a multi-time conference finalist across the butterfly events and is a school record holder in the 200 medley relay. Brett graduated from Wheeling Jesuit in 2018 with a degree in English and Theology, and from Duquesne University in 2020 with a Master's in English.
Brett began coaching country club in 2013. After college, he began coaching collegiately under head coach Danny Murphy at Wheeling University. Now Brett is the assistant swim coach at Jesuit High school where he also teaches English. 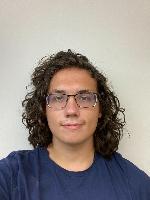 My name is Maximilian Theriot, but please, call me Max. I am currently a student at Loyola university working towards a philosophy pre-law degree. I swam for the Sharks for eight years, and my high school swim team at Jesuit for four.