John is a former All-American, Indiana University distance freestyler, US Olympic Trials qualifier and member of the 1984 Greek Olympic Swimming Team.  A former NCAA Division I, USA and High school Head Swim Coach, John has coached numerous Age-Group, USA, Olympic Trial Qualifiers and NCAA National Champions.  Collis currently serves as the Sprint & Strength Swim Coach for Brecksville-Broadview Heights High School, in which he designs and instructs both the Swimming and Dryland curriculum for the team. Within a five-year span, the Brecksville Swim Team has gone from being unranked in the State to placing second in the State, with their Sprint relay placing First in the Nation.

As a competitive swimmer, John had the unique opportunity to compete for and train under three coaches who have all been enshrined in Competitive Swimming's highest honor, Swimming's International Hall of Fame. These three coaches include Jerry Holtrey, Lake Erie Silver Dolphins, John Trembley, High school National Champions Mercersburg Academy and the legendary "Doc Counsilman, seven-time NCAA Division I National Champions, Indiana University.

John is the founder and executive director of Cleveland Swim Institute and Cleveland Sports Institute, a multidisciplinary health, fitness sports enhancement and sports medical facility located in Broadview Heights, Ohio.   Since beginning his professional coaching career, John has remained steadfastly committed to providing all of his athletes with the same positive life lessons that he learned from his three coaching mentors. Most importantly, his commitment to passing on values like goal-setting, determination, and teamwork which is most evident through his selection of CSI Athlete's staff, whose team members exemplify these same standards of high-quality coaching and mentorship.

John lives in Solon with his wife Katey, two daughters Kacey and Laina Jane, and their two dogs, Coal and Buck.

Charlie was the Head Coach of University Swim Club since 1995 and had remained at the helm through the transition to Cleveland Elite Aquatics in 2019. Under his leadership, USC/CE has been to the Olympic Trials, produced six US Nationals qualifiers and over ten Junior National qualifiers, has been a regular presence on the Lake Erie Zone team, placed as high as 2nd at the Lake Erie District Championship meet and has inspired Passion, Dedication, and Motivation in thousands of swimmers.

Charlie is a 16-time NCAA All-American swimmer at Denison University and an All-American at Hebron Academy in Maine. Charlie began coaching at Paul Hannah Swim Club in Granville, OH. There he coached several swimmers ranked in the US Top 16 and one swimmer ranked in the Top 25 in the world. While in the Peace Corps, he coached the Guatemalan National Team from 1988-1991. From 1991-1995, he coached high school and club teams in Cincinnati. Charlie was voted Coach of the Year, 2002-2003, for Ohio High School Swimming.

In addition to coaching more experienced swimmers, Charlie has a gift for coaching swimmers of all ages and abilities, something he is ready to pursue as CSI's new Head Age Group Coach, "I’m excited to be responsible for designing and developing CSI’s future champions; educating and inspiring these young athletes, in order that each one of our CSI Age groupers reach heights they may currently feel is impossible”. 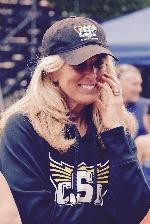