Kristen Reynolds has been a USA swim coach since 2013.  Kristen started coaching with Lake Erie's USA swim team, Piranha Aquatics, as an assistant coach.  She later became the lead competitive age-group coach.  In 2018, Kristen became the head coach of Piranha Aquatics and OHSAA head High School swim coach for Salem, West Branch, Lisbon, and Western Reserve.  During her coaching career, she has coached swimmers to Lake Erie champoinship titles, USA central zone qualifiers, High School state qualifiers, as well as coaching swimmers who earned qualifying times and competed at the USA National Sectional level.  Kristen also is the head coach for the Firestone Area Swim Team that's part of the Youngstown Summer Swim League.  Reynolds is a former YMCA Zone and National qualifier, High School District Qualifier, 4-year letter winner, and 2-year varsity team captain in swimming from Perry High School.  Kristen went on to swim at the collegiate level for Mount Union College.  She got her start coaching as a volunteer junior coach for the Perry Barracuda's age-group swimming.  When not on the pool deck, Kristen enjoys spending time with her family and friends.  Kristen as two daughters that both love swimming, Addison and Ashlynn, and a very supportive husband, Adam, all of who keep her very busy. 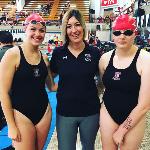 Kristen Kuntzman is in her second year as a Piranha’s assistant head coach. Kristen is a former YMCA Zone Qualifier as well as a 4-year letter winner for Boardman High School. Growing up she swam for Y-Neptunes as well as F.A.S.T. and Applewood along with Boardman High School. She went on to compete at the collegiate level for Mount Union College. Kristen holds a Bachelors in Middle Childhood Education as well as a Master’s in special education. She previously coached for the Youngstown Y-Neptunes, Poland Swim Club, and Poland High School. Kristen currently teaches 9th grade math intervention at Warren Harding High School. She grew up and currently lives in Boardman with her son (and silly white boxer).

Susan Nutter has been a competitive swim coach since 1994 first volunteering for the summer Youngstown Swim League team, FAST (Firestone Area Swim Team); then acting as an assistant coach and later, co-head coach, until retiring from that position in 2015. Nutter was the head coach of the Youngstown YMCA/USA Neptune Swim Team from 2003 until 2016 with the team earning many Northeast Ohio YMCA Divisional Championships, qualifying numerous swimmers to compete in the Great Lake Zone Championships, as well as coaching several swimmers who earned qualifying times and competed at YMCA Short Course Nationals. She stepped away from the Neptunes after the 2015/2016 season to focus on her family’s needs. Nutter has been involved with the Salem Community Center since its opening, hosting competitive swim clinics, giving private lessons, and also helping Barb Clary with Swim Salem; an adult swim program that also supports those interested in doing United States Masters Swimming. Nutter has been a USA swim coach for the past 15 years and is an ASCA Level 2 coach. When not on deck, Nutter is a professional freelance writer whose main focus is research and writing about antiques. She is also beekeeper currently maintaining 12 hives, and she and her husband, Scott, also tap the maple trees on their 65 acre tree farm making maple syrup each spring. Nutter has two sons who swam competitively through high school; Tim, who is a Physician Assistant for Mount Carmel in Grove City, Ohio; and Chris, a CPA, who is a State and Local Tax Manager for Grant Thornton in Cleveland. 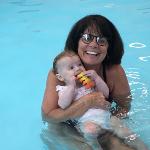 Barb Clary returns to the Piranhas Swamily after getting her feet wet with our Prep group last Spring. Barb has been active with the Salem Community Center prior to even the construction of the center and the natatorium. She served on the Salem Community Center Advisory Board, The Salem Community Center Operating Board and served as the chairman of the Aquatic Committee from 2001-2006. Barb participated in the SCC Indoor Triathlon in 2011 and returned the following year as the Swim Coach for the Triathlon. Clary has been instructing swim lessons at the SCC since 2012 with Red Cross Certification, and USMS Adult Learn to Swim Certifications.  Barb has since become a United States Masters Swimmer competing in both short course and long course USMS Nationals. She, with the help of Sue Nutter, coach the adult Swim Salem Program. Barb offers many adult swimming classes here at the SCC. She competed in swimming in her hometown of Baltimore, MD year round, and competed in YMCA Nationals from 1975-1978. She also swam at the collegiate level for the University of Richmond and later at Loyola College of Baltimore. She and her husband, Steve, live here in Salem. They have a daughter, Deirdre and son, Sean. Deirdre and her husband, Scott just had their first child, making her a Baba! Sean gets married in November. 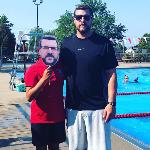 Piranhas welcomes Coach Jordan Graham as our new assistant age group coach! Jordan is a middle school teacher at Columbia Exempted Village School District. Jordan has also had various coaching experience for both football and swimming since 2004, and is currently the head coach for the South Range and Columbiana varsity swim team.