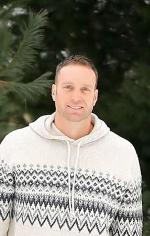 Aaron Workman an ASCA Level 5 coach and is our Lead Senior Coach.  He has extensive experience coaching at the college and club levels. Has developed and coached, 4 Olympians from 3 different countries. Multiple USA, Canadian, German, Irish, Hungarian, South African National Team members, numerous All-Americans, and Olympic Trial qualifiers during his time as a coach with the University of North Carolina, Penn State University, the University of Pittsburgh, the University of Nevada at Las Vegas, and Team Pittsburgh.

A four-year letterman at the University of Kentucky, Workman earned All-America accolades four times, was named to the academic All-SEC performer during each of his seasons on campus and was an academic All-America pick in 2001. The freestyle sprinter helped Kentucky to four consecutive top-20 finishes at the NCAA Championships, including a 17th place finish in 2001 when he earned All-America honors in four relay events. Workman also competed in the 2000 U.S. Olympic Trials.

Workman absolutely loves the sport of swimming. It has been a part of his life since joining a team at 4 years old. He hopes to help athletes appreciate the opportunities that the sport of swimming can bring to their lives and help them create a roadmap to achieve their goals.

Workman earned his Bachelor of Science degree in broadcasting from Kentucky in 2001. He is married to former Kentucky All-American swimmer Jaime Siegele. The couple resides in State College, Pa. with their two children, Molly and Macon.

Having spent most summer days at the pool, Jaime started her swimming career at her neighborhood summer pool with her sisters at the age of seven. Her USA Swimming career began at age 10 when she started training with Allegheny North Swim Club in Pittsburgh, where she competed at Zone, Junior and Senior National meets. Jaime later swam for North Allegheny High School where she was a school and state record holder. She was part of three consecutive state championship teams, numerous relay state championships and an individual state champion in the 50 Free.  After high school she attended the University of Kentucky, majoring in Elementary Education, where she was a 3 time All-American, 4 time Academic All-American and school record holder. She also competed in the 2000 Olympic Team Trials.

After college, Jaime moved to Columbus, Ohio to start her teaching career in the Olentangy Local School District.  There she was an assistant swim coach for Olentangy High School for one year and then head coach of the Liberty High School boys team for 2 years. Upon returning to Pittsburgh, Jaime coached swimmers from ages 4-14 back at her home club, ANSC.

Jaime is currently entering her 17th year in education as a sixth-grade teacher at Mt. Nittany Middle School. 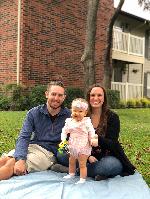 Prior to his time in Texas, Saxon began coaching in 2013 at Sharks Aquatic Club in Shelby, NC and was named Head Coach in 2014.  While at the Sharks, Saxon coached several athletes who qualified for Age Group Champs, Senior Champs, and a Junior National Qualifier. Saxon also served as the Gardner-Webb Volunteer Assistant Coach in 2015 and 2016.

Saxon has a lifetime connection to swimming, both as a swimmer and a coach.  The son of two competitive swimmers and swim coaches, Saxon began his competitive swimming career at the age of 7 and continued all the way through college, where he competed for four years at Gardner-Webb University and was a finalist at the CCSA Championships.

Saxon has a BA in English and a Masters in Sports Science and Pedagogy from Gardner-Webb University.  He enjoys photography, card games, and cheering for the Braves, Seahawks and ‘Noles.  Besides his love for swimming, he also enjoys baseball, football and basketball. Saxon is married to April Simpson and the couple reside in State College, PA with their daughter Ava Jo (1).

Sarah has been involved with the sport of swimming for over 30 years as a club swimmer, collegiate swimmer, and a coach.  Her coaching stints include summer league, USA club, and the NCAA levels. Sarah is a former Conference Swimmer of the Year, NCAA Division II All-American, and Academic All-American who specialized in the distance events.  When she is not coaching, she teaches Social Science courses at a community college and enjoys spending time with her family and two labs.

Mike grew up outside of Seattle, Washington and started swimming at the age of six and continued through college. He was a breaststroker from the very beginning. He swam for Penn State where he was a four year letter winner, a point scorer at Big Tens, and a member of the 1999 Big Ten Championship team.

Mike has stayed on the East Coast since coming to Penn State and has lived in State College for twelve years. He has two sons that swim for NLAC and works as a school counselor at Gray's Woods Elementary. He has coached youth sports for several years, and has finally decided to give his main sport a shot. He's very excited to be part of the coaching staff!

Lilly is the coach of the Novice group. This is her first year coaching for NLAC. She is a sophomore at Penn State studying political science and journalism.
Lilly is from State College and swam for NLAC for 8 years. She swam for the State College Area High School's swim team for 3 years, competing at the AAA PA Districts meet each year. She also swam for the Science Park Swim Team every summer for 10 years, and lifeguarded there every summer for 5 years. She is currently a competing member of Penn State's Club Triathlon team. Lilly is super excited to give back to the organization that helped make swimming her favorite sport!